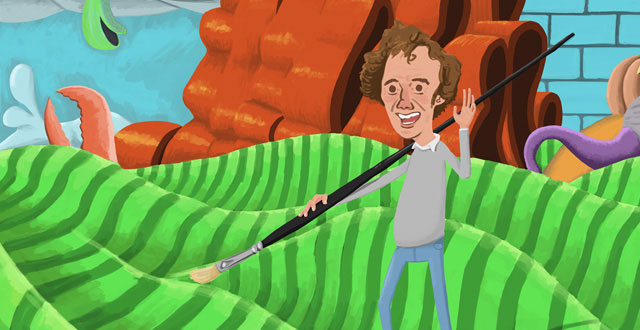 In the southwestern tip of Brooklyn, there is a neighborhood called Red Hook. New Yorkers know it as the place with the water taxi to IKEA, the soccer games with the South American food carts, & the former home of a lovely whiskey shop called Lenell’s. Red Hook is far-afield. It’s one of those places that people talking about but never seen to make it to—no subways run directly there; and bike, bus, or foot are the only options.

Like many New York neighborhoods, Red Hook has its own timbre, and true to its name, the nature of the place is purely aquatic. Perhaps it’s the breezes that roll in over the East River that carry moisture through the streets, or that distinct flatness that lets you know you’re just footsteps from the water’s edge. This is where designer Patrick Smith lives. Perhaps this is why his favorite color is blue.

“That color is easy for me to create a place that you can enter into. When you go into warmer colors, it seems a little more warm or moist or something. Blue feels like you can convey a pure sense of space with blues.” Smith pauses. “I have no idea why I like the color.”

Specifically, the places Smith is creating are dreams. From the room-by-room journey via little wooden train in Windosill to the toyish balancing act of Levers, all of Smith’s creations dance in the subconscious. Like director Michelangelo Antonioni, writer Sylvia Plath, and Team Ico game developer Fumito Ueda, Smith says the influence of Italian surrealist Giorgio de Chirico played a strong role in his interest in dreamscapes: “I think that in my mind, I have a catalog of shapes that interest me and I try to put them together to make something new.”

When Windosill started attracting the attention of the game community, Smith was perplexed. In fact, he felt his outsider status was what made his work vibrant in the first place, and finds little in the independent game community that captures his attention.

What has netted a wider audience for Smith is the intimacy that his games evoke. His games are tactile; possessive, even. They are about holding digital objects and moving them in virtual space, a by-product of Smith’s further training as a Flash developer. “I spend 80 percent of my time trying to make objects react appropriately when you drag them around. Once you start doing that, you kind of commit yourself to doing it for everything,” Smith says.

The obsession with objects is reflected in Smith’s studio space. In college, he painted still-lifes of objects he’d find, and his current living space is admittedly cluttered. His favorite objects are a small mounted wooden glob, two wooden birds, and a wooden shoe. The existence of the shoe, even for Smith, seems apocryphal.

Trained as a painter, Smith finds much of his inspiration from other artists in that field, like abstract expressionist Philip Guston. But he says that his connection to games is tenuous. He doesn’t own any consoles and rarely plays games on his own. When Windosill started attracting the attention of the game community, Smith was perplexed. In fact, he felt his outsider status was what made his work vibrant in the first place, and finds little in the independent game community that captures his attention.

“There’s a Groucho Marx quote about how he wouldn’t join any club that would have him as a member,” Smith says. “There’s a tendency for people not to look at things outside of the field. I’d like to see more visual variety and more visual rigor in game design.”

See more of Patrick’s work on his site.