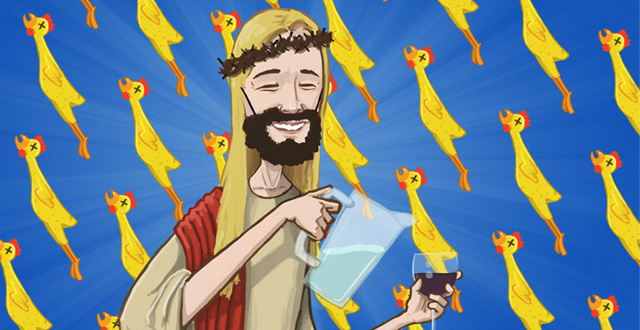 “Pete! Pete! Pete!” With a mixture of childlike delight and drunken awkwardness, a small group of friends in a crowded Helsinki apartment are cheering for magic. It makes a satisfying plop when the magician opens up his chapeau claque and pops the top hat on his head: “Say … did any one of you participate in any spider-related experiments? Or did anyone here lose his or her parents in a traumatic childhood accident? It’s just, I think you guys have superpowers,” grins magician Pete Purho. He confuses the audience with quickly executed card tricks, before letting a filled shot glass disappear without a trace in a black velvet bag. More than 5 million people live in Finland, and 400 are magicians. One of them made Crayon Physics.

For him, games and magic are more closely linked than the magic feel of Crayon Physics Deluxe. It was stage magic that made Crayon Physics possible in the first place.

Petri Purho, a tall, lanky 28-year-old Finn with a penchant for black hoodies and Threadless shirts, is more known for colorful indie games and a mild obsession with penises (according to popular belief, Purho beat his own Crayon Physics Deluxe by drawing different-sized penises) than for palmed cards and disappearing tricks. Crayon Physics, a physics puzzle game with a crayon-picture aesthetic straight from the pages of a four-year-old’s notebook, might have been Purho’s closest to “coming out” as a magician to a wide audience. In the game, players attempt to make a ball reach a gold star by drawing and thereby creating objects ranging from simple boxes to intricate mechanisms that interact with the world and manipulate the little red ball.

At the time, it felt like magic. Inspired by a Gamasutra feature on prototype game design written by Shalin Shodhan, Matt Kucic, Kyle Gray and Kyle Gabler, Purho released a Crayon Physics prototype in 2008 before turning it into a commercial game a year later as Crayon Physics Deluxe and snatching the Seumas McNally Grand Prize at the Independent Games Festival awards away from Kyle Gabler’s World of Goo.

The last years, however, have been quiet for Purho. Using funds from Crayon Physics Deluxe’s success, Purho has stopped working out of Helsinki cafés and libraries, moved into an office with his colleague Dennis Belfrage, the son of a Swedish U-boat captain, and started releasing monthly prototype games. For him, games and magic are more closely linked than the magic feel of Crayon Physics Deluxe. It was stage magic that made Crayon Physics possible in the first place. “There is a surprising amount of work for Finnish magicians. If you’re a student and you just need money, magic is the way to go. That was the way I financed my living conditions.” When Purho was a student at the Helsinki University, magic paid the bills.

Petri Purho’s career as a magician began early. “I’ve been doing magic as long as I can remember. Instead of toys I would play around with my father’s magic props. I ended up doing my first live performance in front of an audience at the age of one and a half years. It was mostly at my father’s gigs, so he would put me in a sock basket in a supermarket and I did some small tricks. There has not been any time where I haven’t been doing it.”

His father, Markku Purho, is one of the most famous Finnish magicians. He organizes the Kouvola Magic Days convention and runs a magic-supply business out of a warehouse in Kouvala stuffed to the brim with magic knickknacks, as well as 2,000 rubber chickens. “He ordered two dozen rubber chickens, but they sent him 2,000. He has a lot of rubber chickens. I think he’s sold five of them so far,” at least three to Purho’s friends. “There is an insane amount of stuff that he collected that way.”

Purho’s father showed him QuickBASIC when all Petri wanted was to recreate Super Mario Bros.’ World 1-1. But game-designer friends, such as Cactus or Martin “grapefrukt” Jonasson, rarely see him talking about magic; and his friends from the active Helsinki magic circle call him “Pete” and know only little of his games. Even if Purho’s two communities are kept separate, however, they are deeply connected.

“You have the most complex problem ever. You have to perform miracles, and you try to find the most simple solution. And, truth be told, most of the secrets are really simple. But there’s a huge amount of thinking behind it.”

Cheats, in the broadest sense, are at the heart of Purho’s understanding of games and magic. “Most of card magic, for example, comes from cheating at cards. Cheating in games is a way for magic to be born.” His favorite magicians are those who cheat, who scam, who make their very existence magical—such as Alexander Casso, a traveling hobo with no magic background who would observe professional magicians, create his own tricks, and mooch wedding societies for booze and money; or the old master Reijo Salminen, who once successfully blackmailed Valio, the almighty Finnish dairy company, to bring them down with just four phone calls if they wouldn’t pay for his performance.

Much like his games, Purho’s magic differs from the commercial offerings of Finland’s more successful magicians who tour big birthdays and company parties with performances that focus more on jokes than on magic. “I think he does magic for himself, and not for an audience,” says Jesse Örö, a young magician from Helsinki.

“I am kind of a weird magician,” Purho admits. “I’m trying to get a bit more expressiveness into it.” Purho has earned his own place in the Finnish magic society as a geeky, playful inventor who, most importantly, performs magic with cards: an art that the great magician Johan Nepomuk Hofzinser likened to poetry. Asked about Purho’s place in the community, his friend Sami Lahtinen grins: “The best description I’ve ever heard of what a genius is: ‘It is a person who finds simple solutions to complex problems’; and that is essentially the very essence of magic. You have the most complex problem ever. You have to perform miracles, and you try to find the most simple solution. And, truth be told, most of the secrets are really simple. But there’s a huge amount of thinking behind it. And I think Pete is a thinker, first of all.”

Petri Purho’s great achievement so far has been to make us feel like fantasy magicians, by letting us bring crayon drawings to life. Sometimes, you have to work miracles to make a little red ball reach a gold star; sometimes the miracle is the creation of a dinosaur car, as in Purho’s current game with Martin “grapefrukt” Jonasson, Jesus vs. Dinosaurs. And sometimes, making games—creating intricate systems, disguised as toys, out of nothing—seems like poetry with machines. If there’s a penis or two in those games, so be it.