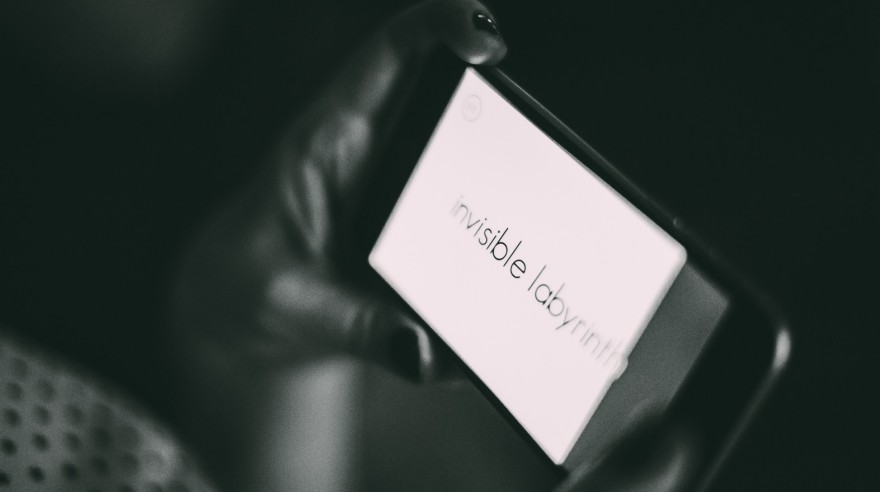 The iPhone may be eight-years-old, but with Apple reiterating on its design every year, adding new features to its tilt and tap core, it’s still a magic box full of tricks. Nevertheless, the experimental phase is kinda over for Apple’s smartphone—we know what works well and what doesn’t—and so we often see the same ideas crop up over and over with apps mostly applying only new skins and contexts to differentiate themselves.

“rules should be broken”

This is why when Progress to 100 comes along, asking you to stroke, shake, perhaps even smooch the screen, showing you what seems to be the full range of what the iPhone (and iPad) can do, it’s automatically surprising and fresh. The 100 in the game’s title is a percentage; each level (if you will) a single percent. The challenge is to figure out how to progress through each percent. The screen starts in full black, a slanted white font inviting you to initiate your “first touch.” You do so, and a strong shade of ecru spreads like a wave over the black, a chirpy woman cries out “Yay!” The feedback is gorgeous. And that’s it then, you’re locked in, at least for several minutes if not longer.

This is quite an achievement, to immediately hook you in with a two-tone presentation, and it’s something that the team behind Progress to 100 deliberated on significantly. Tim Garbos of Copenhagen Game Collective, the game’s designer, champions what he calls “Scandinavian design” in informing Progress to 100‘s minimalism—”It’s about functional, clean design where everything exists with a purpose,” he says.

Hearkening back to the dogme ’95 movement in filmmaking, Garbos explains that he and the rest of the team decided on three strict rules in order to keep their vision throughout development. They are as follows:

#1 The only animated object is the progress bar.

#2 The only visual hint for a puzzle is the text, so no illustrations.

#3 Keep surprising the player. Introducing new mechanics all the way to the end.

These rules proved tricky to stick to. Garbos admits that he did break the first one once when deciding to animate the letters but that idea was eventually dropped. Still, the resulting game does break those rules a few times—”in the end; rules should be broken,” Garbos reasons.

Of those three rules, it is the third one that lends itself to the most creativity, both in the development team and the player. Garbos had worked with alternative input and interaction for the children’s book Wuwu & co. that launched earlier this year. He incorporated some of this into Progress to 100 but also looked to other games that push the boundaries of a hardware’s functionality, particularly ones that use physical interaction, such as two-player ballet dancing iOS game Bounden, and the PlayStation Move’s group-based scrap Johann Sebastian Joust.

The initial idea with Progress to 100, then, was to see what you could get people to do with only a few words as a hint. And so it emerged naturally to employ the iPhone’s many features towards this goal, getting players to rethink how they can be used. “Can we get them to put their nose on the device and look towards the sky for 10 seconds? Can we get them to actually plug in the phone to the charger?” Questions like these are how the team challenged their thinking and designs when approaching the game.

“I saw it as painting with sound”

This is why Progress to 100 starts out with simple instructions such as sliding a line across the screen and holding a finger on it. But it slowly slips into more abstract riddle-like puzzles. “Ride a horse,” one of them says. You have to work out what interaction between you and the iPhone could be surmised as such. Turns out you need to pretend your device is a pair of reins. Arriving at that solution, whether accidentally or by process of measured thought, is time and again a feeling of elating victory. It’s what keeps you excited to chip through all 100 of these “playful and puzzling moments.”

What shouldn’t go amiss when talking about Progress to 100 is the role of its sound design. It’s crucial. Martin Kvale, the sound designer, iterates as much, saying that it’s the sounds that give the hints volume where the visuals cannot. “I saw it as painting with sound, as I had to make people imagine all these pictures, locations and actions you did in the puzzles,” Kvale says. “For instance imagining the ocean when you heard seagulls, standing at a pedestrians crossing in a busy city, or in a schoolyard full of kids. The sound turned out to be essential to getting people to think in the right direction.”

Kvale’s excitement extends beyond the sounds. He proposes that Progress to 100 is a modern version of the 1929 experimental film Man With A Movie Camera. Its title reflects the subject, and the man being referred to is Dziga Vertov, who practically invents what are now established filming techniques like zooming, panning, scales, and contrasts. It’s a documentary that looked to discover as many effects that a camera is capable of doing. “We are basically doing the same, just 90 years later, and for the iPhone,” Kvale says. It’s a sound argument.