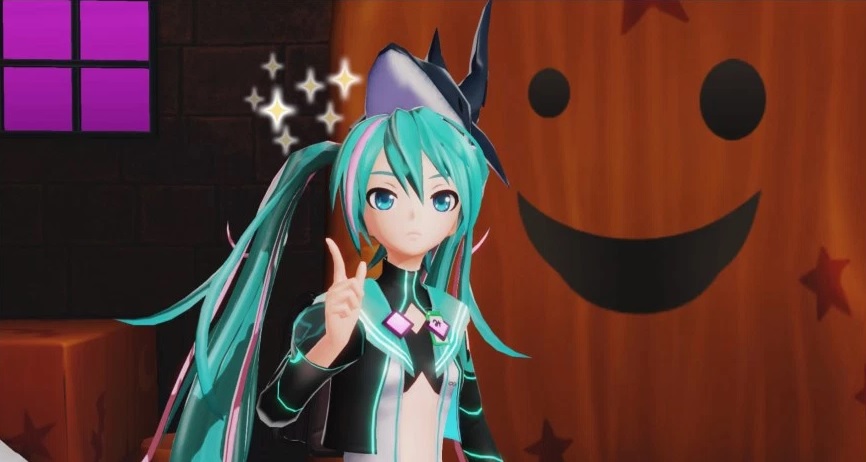 Who the fuck is Hatsune Miku? Some may say she’s a Vocaloid, the poster child for the voice synthesizer software engineered by Crypton Future Media. Others may say she’s just an idol, one of the pure virtual variety, playing shows as a hologram from time to time. Others will attribute her likeness to mostly being a videogame character, appearing time and time again as the face of Sega’s Project DIVA rhythm game franchise. But I say she’s something more. Miku is a God.

Dancing, singing, performing extraordinaire Hatsune Miku does not know pain. She only knows happiness, glee, cheerfulness. Except for that time in Project DIVA X when I gave her a totem pole as a present, she wasn’t too happy about that. But still, Miku’s the type of person whose emotions are always dialed up to 11. She wants to feel pleasant 24/7, and if that happiness isn’t maintained, she grows disappointed. Miku’s occasional disappointment reminds me of my mom’s disappointment when I don’t call her back within a day. Or my boyfriend’s disappointment when I insist that no, I don’t actually want mac n’ cheese for dinner for the third time this week. Miku’s saddened eyes burn holes directly into my skull. I feel bad about not cheering up the virtual girl.

Project DIVA X is the 10th installment in the ongoing Project DIVA franchise. I’m personally a more recent fan of the series. My first entry was Project DIVA F (2014), which I quickly poured dozens of hours into after my friend turned me onto it. “It’s great and hard,” she probably said, I don’t really remember the specifics of her recommendation. “It’s the Dark Souls of rhythm games,” someone who makes annoying statements like that might say as a descriptor. It’s a statement that makes me cringe, yet also totally understand. Project DIVA is, quite frankly, not for the faint of heart. It has probably caused carpal tunnel for about a fifth of its players, myself included. But that’s part of its appeal. Frenetic button tapping and screen swiping, mixed with the catchiest electronic-leaning J-Pop one can imagine. It’s magic.

Play Miku at my funeral

Project DIVA X might be the best starting point for newcomers to the series. With the new Cloud system, players are better eased into the game’s different styles. But if you’re itching to play on a harder difficulty than “normal,” the option to switch over to “Free Play” is always available (the sorta-classic Project DIVA experience available from past games). The Cloud system also gives the game a tinge of story through visual novel-y portions, but it honestly doesn’t add much. If anything, it’s just another excuse to admire the ever-unlockable modules (outfits) and accessories for your Vocaloid team.

When I mentioned earlier that Miku knew no pain—I wasn’t kidding. Do you see how she pins that name tag to her bare skin? How metal is that? (Speaking of which, she should collaborate with Babymetal.) If that doesn’t convince you, how about that shark that is literally eating her skull, and she doesn’t seem to mind (or bleed!)? Honestly, Miku probably feeds off of that negative energy, off of all the things in life trying to tear her down. Like Miku haters that don’t understand the independent, bustling creative community surrounding Vocaloids, that ultimately give her life beyond being just software, and bash it ignorantly. Or like that shark that thinks it’s okay to chomp on a teenage girl’s head and get away with it. That’s not cool. Using Miku’s lack of pain as an excuse does not make it a viable one.

Regardless, I’ve been enjoying my time with Project DIVA X. I respect that it’s not a game for everyone—it either clicks with you, or it doesn’t. But this installment uncovered something deep within me that I never knew existed. Love. I love Hatsune Miku. I love all the diversity in the songs producers are able to create for her. I love all her different outfits and accessories, even if there are dumb ones like a baby bib or the shark eating her head. Project DIVA X makes me feel spiritual as I tap buttons at seemingly impossible speeds, finishing the joyous “LOL -lots of laugh-” on Hard. For once, I feel like anything is possible, but most of all, that it wouldn’t be possible if I didn’t have that particular blue-haired angel watching me from above. I’m cemented as a Miku fan for life. Remember to play “AgeAge Again” at my funeral. And thanks Miku, for everything.

Accept Hatsune Miku and her Vocaloid pals as your lords and saviors when Project DIVA X launches for PS4 and PS Vita on August 30th. Also, unsure if you’re into Vocaloid music? This song might be enough to push you over the edge.