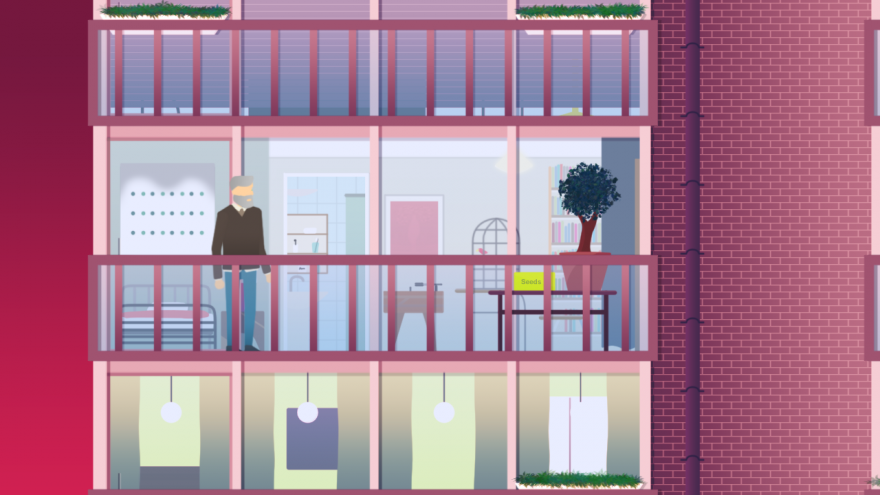 There’s something so unsettling about a gritty neo-noir plotline dropped into the Small Town, America setting. One of Fargo‘s main draws is this contradictory clash of plot and place: the stylized crime-thriller scenario we’re so comfortable watching on the silver screen suddenly starts feeling much too close to home. Seeing a character like the hapless, endearing Officer Gus Grimly face off against the inhuman force of nature that is Lorne Malvo just makes you feel kind of queasy. You probably know a guy like Gus, and he probably lives down the street and gives you great deals at his yearly garage sale. But planting a man like Malvo in the same universe as Gus Grimly transforms his innocence from comforting into unsettling. As audience members, we sit at the edge of our seats, awaiting the moment when that innocence inevitably shatters.

Providence, an interactive short story by a Nordic developer known as Eight Bit Skyline, utilizes this tension with a twist. Rather than beginning the story by introducing its noir villain as in Fargo, the first sequences come off as almost suspiciously harmless. An old man in a modest apartment feeds his bird some seeds, while dramatic Chopin music plays in the background. An inconsequential package is delivered. Then, a young farm boy answers the door for his mother only to meet a curious stranger.

The mystery of what connects Providence‘s three protagonists—the old man, the boy, and a silent assassin—fuels both the tension and the player. The bright, picturesque settings shared between the boy and the old man seem interrupted by the third. As the most obvious proof that all is not as it seems in this story, the assassin acts as a dark, noir-ish cloud hanging over the everyday actions of the others. A clean and simple art style visually highlights their distinctions, jolting the player from brightly lit spaces to dark subways where the assassin’s pray dwells.

“In this story everything is just variables that can’t change the inevitable outcome.”

To an extent, the whole story feels like a set-up from the beginning. The heavily autered style pulls almost Tarantino-esque tricks from its bag—with a non-chronological story made up of seemingly unrelated characters, who in reality act as catalysts for one another’s narratives. Though there are some dialogue options, the game never tries to fool the player into believing those choices carry any weight. Whether you say yes or no, kill a man or let him live, “no matter what you do, the past will always come sneaking up on you,” the creator says in a forum. “In this story everything is just variables that can’t change the inevitable outcome.”

The polarity between the quaint action and dramatic soundtrack seem mirrored by the title itself, with one definition of the word signifying the holy plan as decreed by divinity, the other being the namesake of a charming little city in Rhode Island. In a similar way to Fargo, Providence straddles this line between grandiosity and the common place up until the very end, when the hand of destiny takes over for the human hand gripping a gun.

Providence is available to download for free on Windows here. For more work by Eight Bit Skyline, you can go to the studio’s website or Twitter.