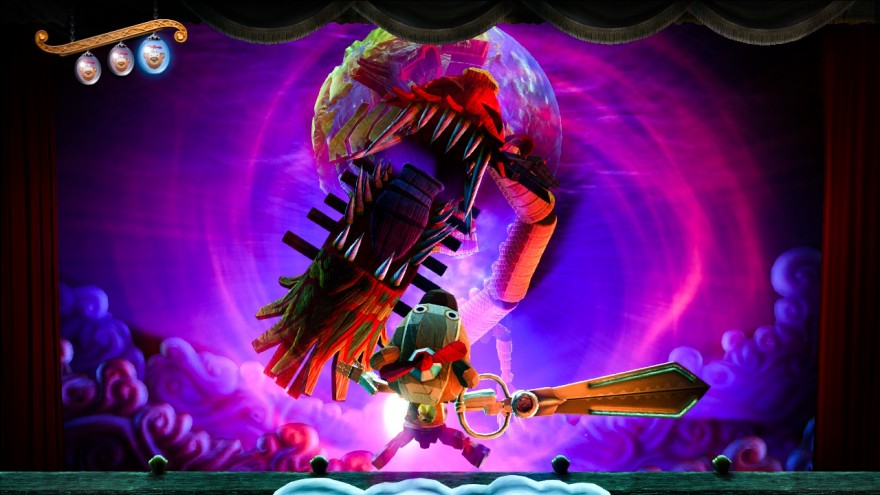 Sony Japan Studio’s new game Puppeteer opens with a closed curtain. If you press start you can jump straight into the game’s tactile world and its challenging-yet-familiar platforming physics, but you really should linger for just a minute. It’s the curtain that makes the whole game work.

Well, technically, it’s not the curtain that’s important, it’s the proscenium—the frame that separates the imaginative world created onstage from its audience, and by extension, the “real” world. Every game is framed by the edges of our screens, but swathing the screen in virtual fabric allows Puppeteer director Gavin Moore to draw on the improvisational and gesture language of live theater.

“When the lights go down and the curtain goes up,” Moore says, “you are instantly transported into a fantastical place where you instantly believe in that world without question. There is a sense of entering a magical world where anything can happen.”

They ham it up, address the audience, and push and pull at each other for control of the scene.

This genius for the unexpected is part of the particular magic of Puppeteer. The player character, Kutaro, is a child whose soul has been stolen by the Moon Bear King, a tyrant who has seized control of the Moon Realm. As a little wooden boy, the silent Kutaro doesn’t have much of a personality of his own, and can even swap his head to gain different abilities. Kutaro is surrounded, however, by a cast of characters in every sense of the word, each of whom has been transformed in some manner by the Moon Bear King, and each of whom is looking to make some alteration to their own present circumstances.

In a sense, Kutaro’s story is a pretty traditional hero’s journey, but Puppeteer’s emphasis on the drives and the desires of the characters around Kutaro moves it a bit beyond the standard Pinocchio story.

“Improvisational” seems like a strange descriptor for something as tightly scripted (in dialog as well as in code) as a major videogame release, but that’s exactly the sense that Puppeteer conveys. Moore describes his characters as actors with their own personalities and motivations, which don’t always line up exactly with the “script.” They ham it up, address the audience, and push and pull at each other for control of the scene. The action of the game is not just about who controls the moon, it’s about who controls the performance.

Every world, no matter how large, is bounded.

Still, this is exactly what’s at stake in all narrative video games, where designers and players try to tease out the balance between the levels of direction and responsiveness required to make a playable story function. In a very real sense, it’s impossible to deliver an unscripted outcome. Every secret pathway and every bit of hidden dialog have to be created and encoded well ahead of time. Every world, no matter how large, is bounded. You can wrap, refresh, and respawn, but you can never step into uncoded territory. You can never pass beyond the edge of the screen.

At the same time, as Puppeteer gently reminds us, the play’s the thing. Even the most tightly scripted, unforgivingly designed game responds to the player, and every play is a performance, the activity of the player combining with the game’s precoded elements to create a condition of engaged, contingent immediacy. From a systems standpoint it may be as simple as placing falling blocks in a line or as complex as accounting for narrative choices that extend across multiple games, but the player is always an element of the performance.

Acting out the choice changes the experience.

As a narrative game, Puppeteer itself falls closer to the more tightly scripted end of the spectrum. By gathering collectibles, players can unlock additional bits of backstory, but the in-game story progresses in a largely linear fashion as the player completes levels. Players can, however, choose how much they want to share the stage with the other characters in the game. In the Halloween Ville stage, Puppeteer includes a vampire who serves no function but to bemoan his state for two and a half minutes. The player can interrupt the vampire by using a garlic head, or simply move on. Neither of these choices changes the story, but acting out the choice changes the experience. A player on a speed run is performing a different character than a player who explores every hidden corner. And a character who stops to listen is something else entirely.

We are always actors in the play. There is always room for things to be at least a little bit different.

Every player character is in some sense a puppet, an automaton with invisible strings trapped behind a glass screen. It’s a courageous game that wraps that screen in fabric and gives its puppet a pair of scissors, but not every string can be cut. With skill and patience, Kutaro can escape Moon Bear King, but ultimately nothing can free him from the control pad in your hands. This, player, places a lot of responsibility on you. Perform it well.