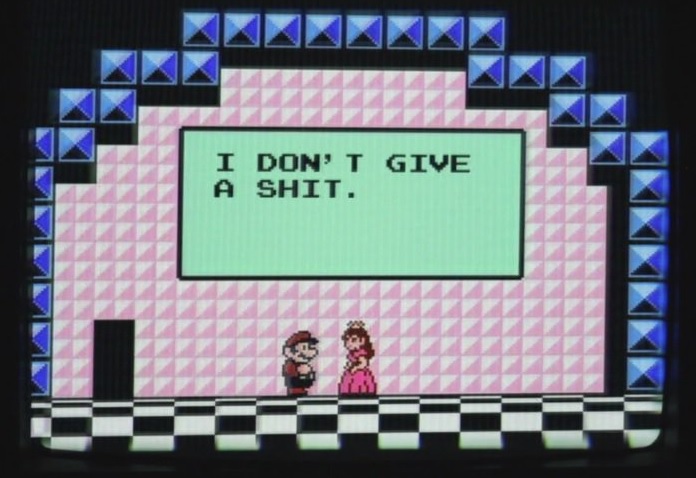 If great art does in fact flourish out of restraints, then it’s no surprise that the chiptune melodies of early games have so firmly embedded themselves in the hearts of the generations that grew up alongside them. This is particularly apparent in the mutual infatuation that the realms of videogames and music videos share. Just look at Bonobo’s Silver or Royksopp’s Happy Up Here videos that each clearly borrow from games, for example. The opposite is just as much true in the case of Mobigame’s mobile game Truckers Delight (2010) and Buncho Games’ adaptation of Jamiroquai’s Virtual Insanity video.

a manic, machinima mixtape of footage

The latest video for the first single from Canadian punk rock outfit PUP’s upcoming second album is the latest inductee in this hallowed roster of intermedia hat-tips. Directed by long-time collaborator Jeremy Schaulin-Rioux, DVP‘s video is nothing short of a manic, machinima mixtape of footage spanning some of the most iconic titles throughout the third generation of consoles. Mario boasting how fucked up on alcohol he is while referring a match of Punch-Out!! (1984). The reporter from Teenage Mutant Ninja Turtles, April O’Neil, cheerily announces she’d be better off dead to a news crew. It’s a pretty bleak and eerie blend of tongue-in-cheek, that’s for sure. And it’s all paired with on-screen lyrics from lead singer Stefan Babcock’s blisteringly hoarse and sullen shouting into the pitch-black vacuum of jilted reciprocity.

The facile nostalgic pretense of the game visuals juxtaposed with the throat-parched inebriated vocals creates a feeling that radically bobs and darts along the spectrum of emotional extreme. All at once it seems to yearn for the stark low-poly simplicity of adolescence while tussling with the romantic and interpersonal fallout of arrested development.

The band’s follow-up album to their 2014 breakout self-titled debut currently has a tentative release date hanging in the amorphous window of late 2016. You’ve gotta wonder coming off the strength of this video as to whether there will be any more throwbacks to yesteryear aesthetics through a post-adulthood lens. Regardless, DVP certainly secures its place as yet another testament to the way in which games have embedded themselves in the shared imagination and visual iconography of our times. And this time it comes out shouting.

You can watch the music video to DVP over on Vimeo.