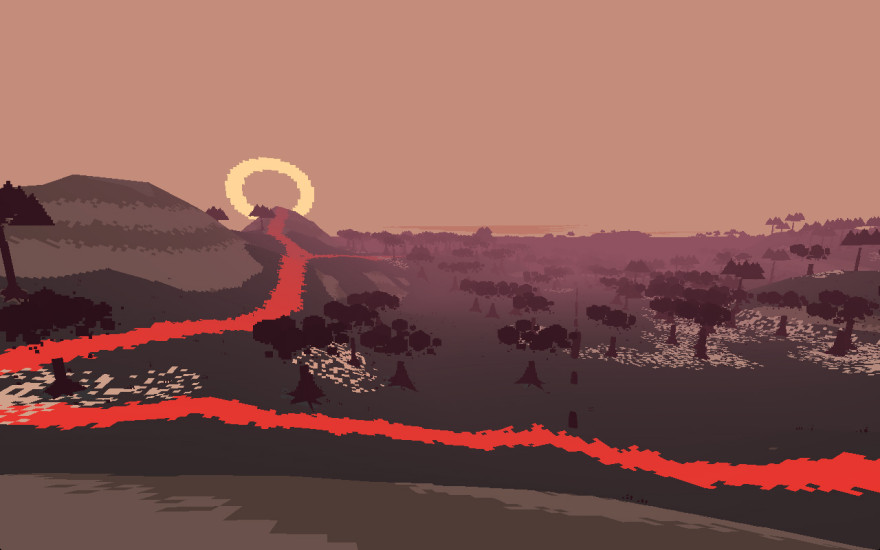 A sublime musical wilderness, the exploration of which is capable of massaging enormous euphoria into your brain, Proteus hardly needs to be remixed. But that didn’t stop The Floor Is Jelly creator Ian Snyder from starting a Proteus modding experiment. His aim was to subvert the original as much as possible “within its constraints.”

He called it Pseutos—a portmanteau of pseudo and Proteus—and showed off just one image of his experiments; a glimmering, blood red ocean. This idea resonated with interactive developer and musician Devine Lu Linvega, inspiring him to divulge some Proteus modding himself, exchanging the soundtrack and sprites with his own—no code, just asset replacement. The result is Purgateus.

“A while back, when I was playing Proteus, I had already made up some mental images of what my own Proteus might look like. This is really just about going back to these feels,” Devine told me.

Typically, Devine’s worlds are marked by Nihei-esque stark, often austere industrial labyrinths patterned with alien symbols that require patience to comprehend. “Obviously”, he said, “the rainbow colored Proteus isn’t quite into my palette.” So he started with the colors, primarily making it all turquoise and orange, just as a basis. For the music he wanted a synth to capture the mood of Proteus, but more ghostly, inciting a different kind of curiosity.

“I wasn’t going for the Proteus forest feel, I wanted something a bit more like a sort of heaven. At night, it really goes into some kind of hell. The water turns red; the sun is like a red ring of fire.”

Purgateus is astonishingly more melancholy than Proteus. The name of the mod itself is derived from “purge”—to remove persons considered undesirable. Gravestones cluster over misty seas; statues alluding to gods sit stiff atop hills; trailing spirits linger across the sky. The island is haunted by a dead population, perhaps smitten by its overseers, so now the trees drip black, huts become cenotaphs, and miasma hangs in the air.

As you float upon the island, the seasons of spring and summer retain dots of the original game’s sprightly aesthetic. The change the mod brings is most noticeable in this half of the game with its red rivers and gloomy horizon.

Fall and winter are weaker with surprise but stronger thematically. As always, the latter half sees the trees wilt while insects fidget with death under a ceiling of clouds. Winter comes; all life is purged. Purgateus isn’t the vacation that Proteus is, its island is moribund, despondent as a cemetery slowly swallows its inhabitants.

You can download Purgateus on Venus Patrol, but you’ll need to purchase Proteus first.