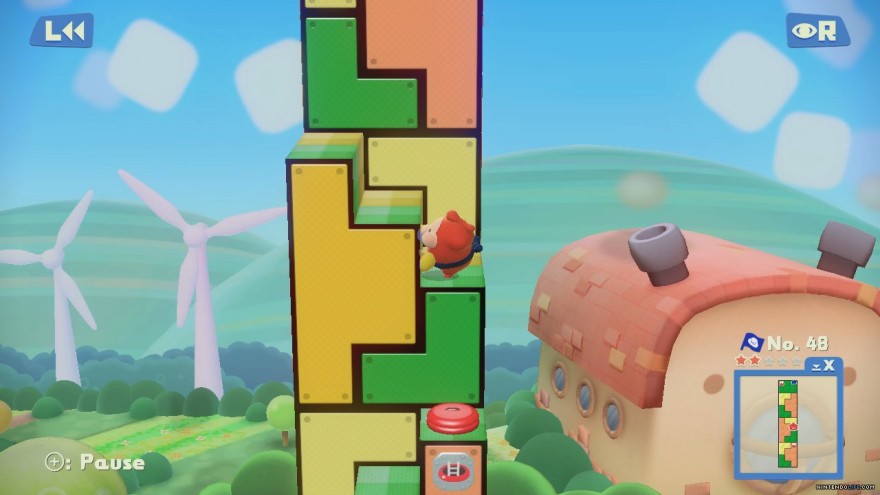 In Pushmo World for Wii U, you play as a sumo-wrestling cat who saves children stuck inside block structures sitting in neighborhood parks. Finally: The Nintendo-published game with a story-driven narrative and mature themes we’ve been waiting for.

In fact, this is a puzzle game. And if it sounds familiar there’s good reason; Pushmo World is a polished-up version of a 3DS game from 2011 with over two hundred new levels. The basics of that game are exactly the same. You still waddle up to a flat series of blocks, each somehow squished down into two dimensions. By grabbing onto a block and pulling, each layer can be extruded up to three blocks deep. Do so strategically in order to climb to the top. The same pushing-and-pulling-and-jumping that elevated a simple concept into a thoughtful surprise nearly three years ago is all here, a bit shinier, and on a much larger screen.

The baby wails out a single, confused cry.

(And that story summary was no joke; each structure does encase some poor confined child, represented as a flag on one block’s surface. Pull that layer out into three dimensions and the baby wails out a single, confused cry. Reach the child and Mallo, your sumo-cat, picks him or her up and tosses the bundle in the air like a proud parent.)

What’s also the same is the odd naming conventions for the game in its three major regions of release. Whereas North America will play Pushmo World, Europe gets Pullblox World. It’s tempting to wonder why these slight tweaks were made by the local Nintendo PR team. Do Americans respond better to the pro-active verb “push” than the alternative, as found in self-esteem literature telling you to Push Yourself? Do Europeans appreciate more the sense of community inferred by “pull,” such as when we pull things together? The original Japanese splits the difference, polite to a fault like a deep bow: Hikuosu translates literally to “pull / push.”

At least the World part of the name remains in each, and therein lies the biggest advantage of this Wii U exclusive. In addition to solving the pre-built puzzles, Pushmo World includes a robust editor allowing you to build your own and share them with others. The 3DS original included this, also, but the method for sharing them was a bit obtuse, needing to send the generated QR code to others manually and outside the game’s ecosystem.

In World, player-generated content will be corralled into a single mode called “World Pushmo Fair.” On the game’s small overhead map, you stroll down to a ferry awaiting to send you off across the globe where, ultimately, thousands of children will be trapped in homemade block-contraptions, praying for your timely solution. In its pre-release form, this option was not available to explore yet. But I did make the puzzle below using the in-game editor. Please save our captured baby soon.

After fifty levels or so, the block structures grow much larger. Certain shapes resemble real-world objects, like a huge cruise ship or tall pink flamenco. Scaling these giants is when Pushmo World begins to feel like more than another block-connecting head-scratcher, but something else entirely. What began as one more anonymous color-coded structure becomes a giant to surmount; manipulating each layer and jumping to and fro feels closer to climbing a beast from Shadow of the Colossus more than dropping the perfect piece in Tetris.

Pushmo World humbly sidesteps comparison to other games of its ilk, as there are few. This is not a fancy, shirt-tucked-in puzzle game, like Jonathan Blow’s upcoming The Witness. Nor does it try to wow you with the hip trance-state of Lumines. Of its contemporaries, Pushmo shares the most in common with two very separate games, having the rounded, marshmallow aesthetic of Spry Fox’s Triple Town (minus the social game hooks) and the incessant block-maneuvering of Atlus’s Catherine (minus the psycho-sexual anime narrative).

But unlike either of those games, this is developed and made by a platform holder. Nintendo’s Intelligent Systems conceived and designed Pushmo alongside their other, deeper experiences such as Fire Emblem and Paper Mario. Notably, it began its life on the 3DS, Nintendo’s handheld, before coming over to their languishing console. More and more we see their portable as a space for experimentation and new ideas: Just this year we’ve already seen a launch title reimagined as a “contemplative first-person shooter” in the guise of Steel Diver: Sub Wars; a free-to-try baseball shop owner haggling simulation, Rusty’s Real Deal Baseball; and a GameCube character reinvented as an Augmented Reality photographer in Chibi-Robo: Photo Finder.

Pushmo World is more of a great thing, and that’s hard to complain about. But as the Wii U increasingly looks like a poor child captured in some mysterious restraints, I fear shiny versions from the past won’t unlock these unfair shackles. Let’s hope Nintendo does their best sumo-cat impression and gets to puzzle-solving like we know they can.