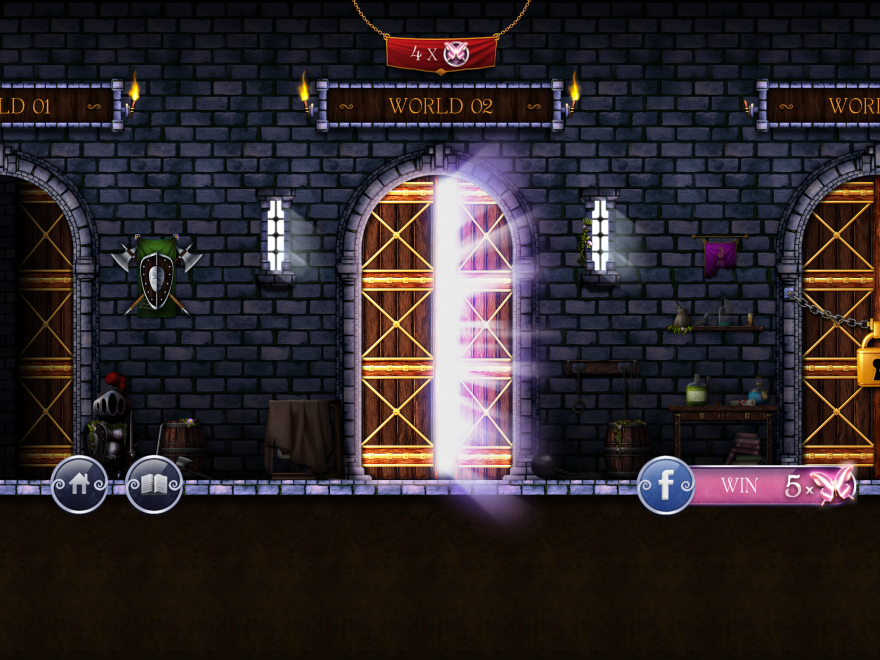 If you ever went to a carnival as a kid, you probably took a walk through the House of Mirrors—a tiny maze filled with infinite reflections. It’s easy to take the power of mirrors for granted after going through these, or even after just brushing your teeth in the bathroom mirror for years on end. But those reflection on the wall are full of history, from carnival shows to Shakespeare plays. Alice got lost in a mirror, the Evil Queen had her talking mirror, Dracula showed no reflection in the mirror. Mirrors are everywhere, from literature to cinema to your car door. Inoqoni, a new puzzle-platformer for mobile devices, is a clever little game chock-full of mirrors—but it certainly doesn’t take them for granted.

As in the dark recesses of any of Grimm’s fairy tales, it doesn’t exactly hold your hand.

Inoqoni is a little girl, led astray by a wandering butterfly while on a walk with her mother in the woods. She chases the tiny creature through the forest and into a deep castle tower. The place is crawling with bugs and evil knights, but she finds an ally in the numerous magical mirrors. Inoqoni is a charming and challenging game that taps into the history of mirrors and folklore, with a mix of castle dungeons, full of playful butterflies and eerie music. It feels like a trip straight into the heart of Grimm’s fairy tales. And, like the dark recesses of any Grimm’s fairy tale, it doesn’t exactly hold your hand.

The game starts off by introducing the magical mirrors. These mirrors can flip entire rooms at Inoqoni’s command. Their main advantage is that these mirrors can deposit Inoqoni herself, or anything for that matter, into the same position, indicated by a slight outline of a mirror, on the opposite side of the room. The puzzles involve a good bit of mind-bending room flips and flops as she tries to reach new doors. The game ramps nicely, beginning with single-mirror puzzles that teach you how to use the mirroring mechanic. As Inoqoni moves through the castle, she encounters increasing rows of mirrors with increasingly complex arrangements, that she uses to get past locked doors and deadly knights. Blocks and keys come into play, leading her over spikes and behind locked doors, ever deeper into the castle.

The puzzles pull from the same brain-space as those of Braid and Portal, with blocks being mirrored onto switches, and Inoqoni herself dropping off ledges to mirror herself in mid-air. But the most germane comparison, I think, remains Lewis Carroll’s story. Inoqoni feels quite like the way Alice describes her ideal world:

?Lewis Carroll, Alice’s Adventures in Wonderland & Through the Looking-Glass

Wandering through the castle with its child-sized bugs, warped mirrors and butterfly apparitions feels not too far off from Alice’s world. It’s a world full of nonsense, with mirrors that make Inoqoni find herself on one side of the room in one second, and then on the other side in the next. Everything is topsy-turvy. The puzzles retain a sense of logic to it all, and keep the attention of those a little past the age of fairy tales. But then, perhaps that’s entire point: to remind us of the joys of getting lost.