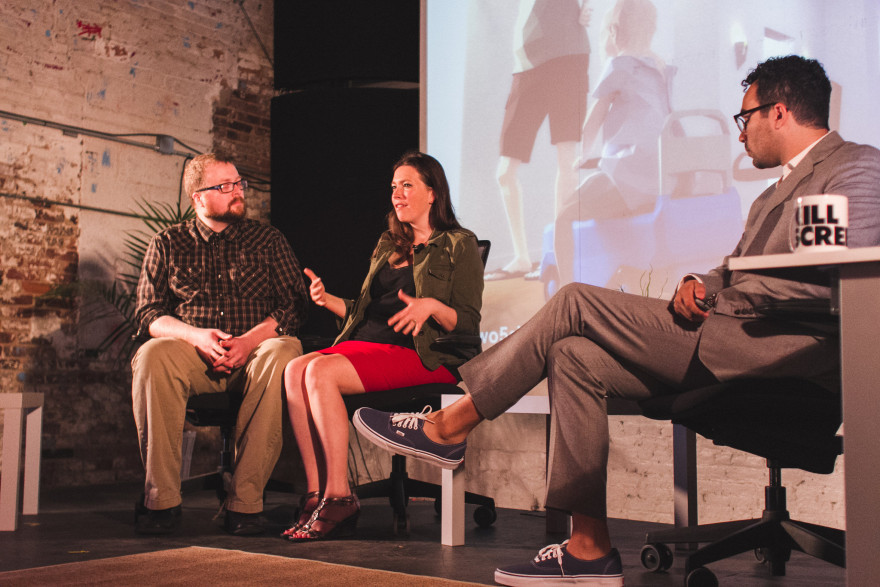 On Saturday, May 16th, Amy and Ryan Green took to the Two5six stage in Williamsburg, NY to discuss the role of loss and non-fiction in game-making. For the past few years, the husband and wife duo have been working on a videogame about their terminally ill infant son, Joel, entitled That Dragon, Cancer. After their candid keynote at the public conference, the couple sat down for a quick but intimate Q&A for our Periscope followers, which we’ve transcribed below.

Jess: What was really interesting about your talk to me was this idea of creating a game, especially this game, as a family. How did that change the process for you two?

Ryan: I think for me, the most profound thing I’m learning is how to be less selfish with the game. Because I think over time I started to identify with the “father making game about cancer” headline. I felt like I owned it, that it was me and my voice. So I’m trying to intentionally make space—or intentionally not take up all the space, I should say. And I think Amy has a really important voice and energy and perspective and it compliments me, but also, it’s different from me. I feel like us being represented in that way, and also making it so its not only an expression for me but it’s an expression for Amy, and also in some places for our kids as well. They want to be part of what we’re doing. So that was the biggest conflict and struggle in the creative process for me.

Amy: Right. it’s just that. It’s our whole family’s story, and so it would seem funny to make the game and not include our children and not include both of our voices and both of our perspectives. And in a way even that is struggle. What direction do we take this? And how do we do this so it really reflects what it was like, even just living with Joel and making those decisions together. Because we weren’t always on the same page as far as even treatment options went. You have to go home and talk it through like, “why not this” and, “should we maybe do that?” You just try and work out how to make those decisions together.

Jess: I was actually lucky enough to watch the documentary, Thank You For Playing, and I thought one of the amazing things there was the boundaries you both discovered you were willing to cross and not willing to cross. Like, for example, having another baby’s cry instead of Joel’s caused tension. What were some other boundaries that you both found or discovered through making this game?

Amy: Yeah, what you mentioned was a really big thing. Ryan didn’t want Joel’s crying to be in the game. But we were making a game about Joel, so for me I thought, well why is it better to have another kid crying and sounding like Joel than it is to just have Joel crying. One other issue like that was Ryan’s business partner who’s programming the game. He tried to incorporate some of Joel’s MRIs where you could see his actual tumor in his brain and for him it ended up just being too intimate, too emotional…

It’s not the same as giving Joel the chance, but it’s maybe as close as we can get

Ryan: And for me that wasn’t a boundary at all.

Amy: Right. For us we thought, “Oh, yeah that’s totally fine.” We’d just seen so many of those MRIs over time that we weren’t as sensitive to it. So sometimes it helps to have that outside perspective. And I think we lean toward a policy where, if it makes any of us uncomfortable, we just won’t. Because the game on its own pushes boundaries and so we want to be careful not to push more boundaries than we need to with people’s emotions.

Ryan: If we can consider each other in the game, and then the game design, then that helps us consider the player.

Jess: And with the game coming out in the fall, how does it feel to be on the cusp of sharing Joel with everyone. Is it just exciting, or is there a little, you know, fear there too?

Amy: Sure, I think when you’ve lost a child a big part of those feeling and emotions is that you wanted them to have so much more. You wanted them to have a full life. You wanted them to get a chance to make a difference, to impact the world in the way they wanted to impact the world. So a lot of grieving Joel for me has been dealing with the fact that he doesn’t have the future I wanted him to have. So for me it’s pretty exciting to say, “Let’s let this game go, let’s let it live, and let it be what it will be.” It’s not the same as giving Joel the chance, but it’s maybe as close as we can get.

Ryan: Yeah, I just feel like people care enough not only to talk about it and write about it, but also to give in to it and add themselves to the story. They find it worthy enough to add their own voice to it. And that’s something that happened in the Kickstarter that really amazed me and what I’m really excited for; is realizing again that this isn’t just about Joel. Everybody has a Joel, so this becomes a memorial that we get to put out there for people to walk through and for it to hopefully add to their lives. My hope is that people will feel like this experience added rather than took away from. And I think that trust is a hard thing to establish, but one that I’m hoping, by people seeing what we’ve done over the last few years and seeing the documentary, that they’ll kind of come to an understanding about where we’re coming from. And maybe give it a chance. If it’s something that they feel is too hard—because, ultimately, it is about cancer. It is about losing our son, Joel. But that’s also not what the story is really about. The story is about loving Joel. The story is about art. And the story is about all the mess that comes with life.

Jess: Of course. Yeah, I mean I joked that you guys are the prom king and queen of this conference, because you’re always surrounded by people. Everyone’s coming up to you guys to talk. So I guess the last thing I wanted to ask is: what are your game festival or conference experiences like? After making and sharing a story like this, do people come up and talk to you about love rather than just loss?

Ryan: I think everybody has that Joel story and I love how they’ll share that. Here at the conference, we’re in a place where there’s a lot of designers and I find that people, from small indie shops to big AAA production houses, they’re all made of people just like us, and they all want to make good art that’s meaningful to them and that adds something to their life. That’s why we all got into this. We got into this because we wanted to add something to the world. So I love being able to encourage that. And also hear the stories of people who feel challenged by our story. Because they really want to tell their story—and you can see it in their eyes. But maybe sometimes they’re scared of it, or maybe sometimes they’re not sure people will listen. So I’m encouraged, when we get to come to places like this and we get to talk about Joel. How many people get that opportunity? So if we can provide that opportunity by doing this for other people, I’m really encouraged by the culture that’s going to be created out of it. Because if we’re creating a culture out of our own stories, then all of the sudden we’re not creating a culture that’s like [raises fist in anger] “Arrrgghhh!” Instead, we’re creating a culture that’s saying, “Give me a hug.” And I think that’s so important because it allows us to see each other as people.

Amy: I think that a lot of people have something painful that’s happened to them, that’s shaped them and changed them. And you want to be able to talk about it. But in day to day life, you don’t really get the chance to say, “See me, understand what has changed me.” Because you can’t just bring that up casually with people. So I feel like an experience like this lets people have that chance. To say, “I have something like that, let me tell you my story.”

This interview was edited for length & clarity.