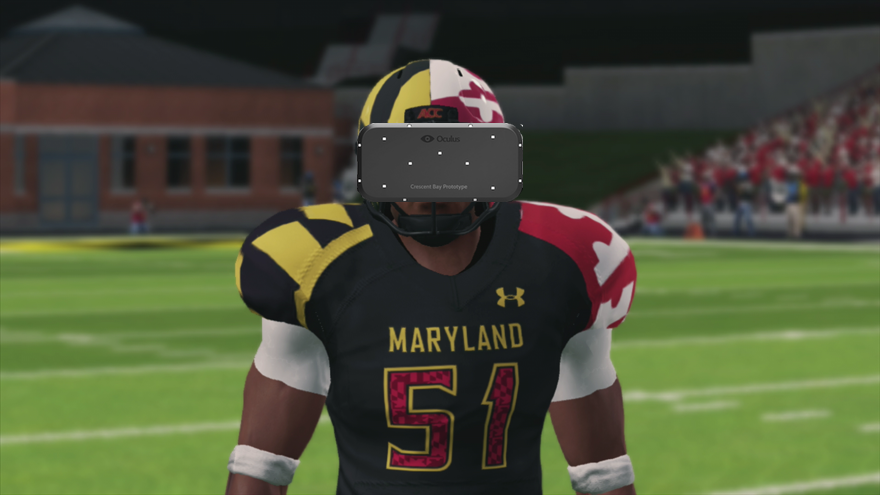 It’s NFL draft season again, that magical time of year wherein prognosticators discuss the concussion-riddled future of young athletes for hours on end. One of the questions that invariably comes up during these interminable discussions is whether an athlete can “read the field” when he moves up from the NCAA to the NFL. But how exactly does one go about acquiring that skill?

Virtual reality headsets, reports FOX Sports’ Bruce Feldman, are the newest way collegiate programs are preparing athletes to read the field. Stanford University, which is home to the Cardinals and Dr. Jeremy Bailenson’s Virtual Human Interaction Lab, has been the biggest beneficiary of this development. “The team was 5-5 in mid-November,” writes Feldman, “But perhaps not so coincidentally, once the VR football trainer improved, so did the Cardinal.” Indeed, Stanford quarterback Kevin Hogan extolls the virtues of VR training: “When you’re just watching film, you don’t get the sound, you don’t get that real-life feel of the game. With this, I can see what the structure is.”

“Once the VR football trainer improved, so did the Cardinal.”

As an educational use of VR, this is perhaps not the most surprising of developments. (In honour of the NCAA, I’m using the term ‘educational’ very lightly here.) Indeed, Stanford’s football program is simply implementing a long-held idea about how VR can be used. Here, for instance, is the University of Washington’s William Winn writing on the potential of VR in 1993: “To the extent that VR can simulate the real world, it allows students to learn while they are situated in the context where what they learn is to be applied. As we have seen, the case has been made that situated learning is both more relevant and successful than learning out of context “

In the intervening twenty-two years, implementation of these ideas has come a long way. Thus, Stanford coach David Shaw told Feldman “I’m thinking in two years this is gonna be in a lot of places and three years from now, you’ll feel like you’re left out if you don’t have something like this.”

Technology is not the only thing to have progressed in the twenty-two years since Winn wrote about VR. Collegiate athletics—particularly men’s football and basketball—have grown into big(ger) cash cows for institutions. Since student athletes cannot be paid, luxurious facilities and other fringe benefits are important tools when recruiting star players. This is how Alabama’s training facility, which cost a whopping $100 million, came to have a waterfall in its locker room. Similarly, in his 2011 story on the rise of the Oregon Ducks, Michael Kruse argued that they had mastered the modern “attention economy,” leveraging the marketing value of flashy Nike uniforms to attract recruits to a program with a very limited competitive history. If you can’t throw money at players, it seems you can throw things that cost money at them.

There’s a photo on Twitter of Auburn’s co-offensive coordinator Dameyune Craig using a VR headset to coach his wide receivers. “Cutting Edge Technology with Auburn Football,” wrote the program’s assistant coach, Scott Fountain. VR is undoubtedly cutting edge technology and there are good reasons to believe it could be useful in training football players. If so, it may even migrate to football games like Madden. When the likes of Fountain tweet about their programs possessing cutting edge technology, however, it’s hard not to suspect that all of these innovations are being used to avoid paying athletes. If so, what a waste.