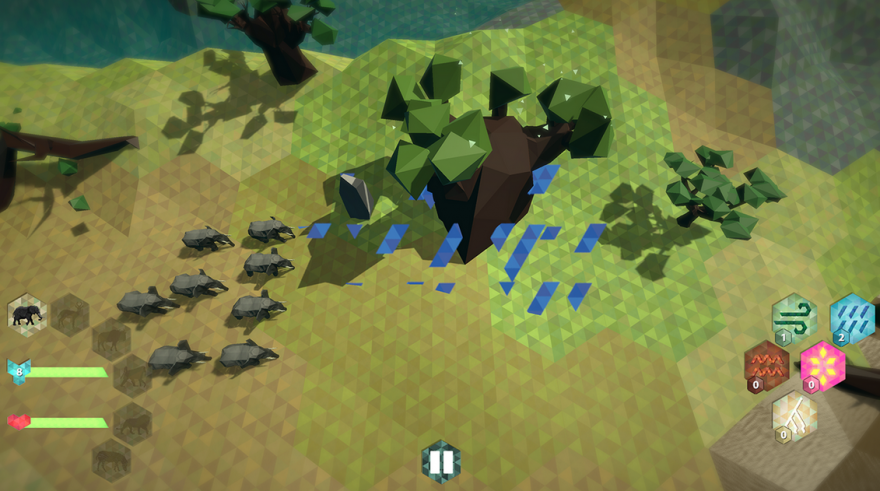 Propelled by nature and elemental attributes, Quench’s tale of animal pilgrimage is actually ruled by human traits. It features a guidance system built around weather controls—tremors, wind gusts, and the like—that’s supported with flexible puzzle design.

Different actions can surmount the same hazard, impacted by herd size, enemy presence, time constraints, and manually-recharged power. There are also consequences tied to each choice—the most obvious: indiscriminate use of lightning will start fires—with subtle effects tailored to each tribe (Elephant, Wildebeest, Zebra, and others). The creators at Axon Interactive hope a philosophy of openness will pave the way for emergent applications of these actions. This quality does not extend to the story, however.

the difficulties encountered on a storytelling level are internal

A linear narrative is threaded with positive emotions and characteristics. Compassion, for example, is a driving force in the game and manifested in the role you play for the animals, mining the same principles as Shelter (2013) and its system of parental oversight but trading a physical presence for the ethereal. Less clear is how forgiveness—another major element—factors in.

When asked how this will come to the fore, producer Tabby Rose outlined that while there are external forces that stifle your journey—smokebeasts and the terrain—much of the difficulties encountered on a storytelling level are internal, where unity between tribes is not organic.

“Your primary narrative objective is gathering all these different animal tribes and keeping them together as they make a pilgrimage,” Rose said, adding that each are guided by differing value systems and goals. “The thrust of the story revolves around reframing these conflicts and the ways we resolve them.” In keeping with this, Quench concentrates its design vocabulary on peaceful methods—“mediate,” “restore,” and “forgive”—over traditionally violent proclivities—“destroy” and “kill.”

“we simply have to move past our own grudges”

Among Quench‘s multiple inspirations—including the conflict resolution of Avatar: The Last Airbender—is Disney’s 1994 classic, The Lion King. Its influence goes beyond the shared presence of an Elephant Graveyard, really serving as an overseeing aesthetic. “We drew inspiration from the broad strokes,” Rose commented, “such as the color palettes and environments, or the dark moments that left lasting impressions.”

Quench itself isn’t a dark game. In fact, the decision for a narrative bound by linearity was to prevent the game from moving in this direction. But it’s the essence of key scenes in The Lion King—Scar’s height of treachery, adult Simba seeing Mufasa in the clouds—that they’re looking to extract and recreate in terms unique to the game.

This guiding role has less to do with pulling from The Lion King‘s core themes, Rose told me. “The story we’re telling is quite different, and the medium is different,” she said. The definition may follow a different standard, but there’s a definite overlap and equivalency in the meaning they’re looking to translate. The mentorship of Quench‘s main character—a crane by the name of Shepherd—is similar to Rafiki’s role; Elephant tribe leader, Shaman, is tasked with a leadership that relates to the hierarchical structure among the lions; and a dying land and pollution caused by smokebeasts matches the oppression and ruin represented by Scar and the hyenas.

Although more prominent in the sequel, forgiveness—that of self—made up a subtle undercurrent in The Lion King, with dark ramifications blossoming from Simba’s acceptance of a lie. Prior to being torn apart through confrontation, Rafiki’s simple yet meaningful lesson on moving forward provided the agency for overcoming this internal conflict. Axon Interactive strives for similar aims with Quench. “Sometimes in order to solve a conflict we simply have to move past our own grudges and accept what’s happened,” Rose posited. “We want the player to come away from Quench feeling like they have the power and resilience to do good.”

Awakening that sense of empowerment will be the primary duty of the “idealistic” story and its humanized lessons.

You can find out more about Quench on its Kickstarter page.