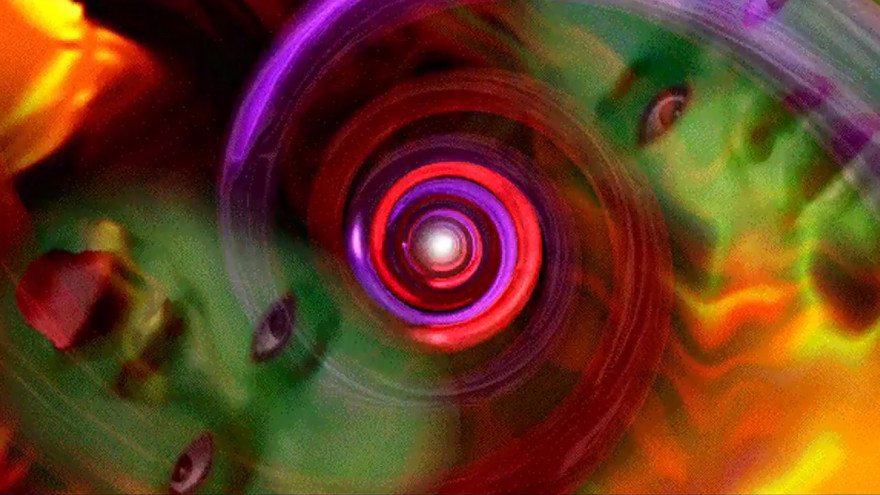 On an average, boring Friday this July, the videogame blog The Obscuritory found its white whale. For all the searching, the pining, and the failed expeditions, surprisingly little fanfare accompanied the announcement—a simple video and a succinct writeup summed up the astonishing discovery. It was the long-lost sequel to one of the weirdest games ever made.

It was said to be called Chu-Ten, or Chu-Teng, or some variation thereof, and it was purportedly the sequel to Eastern Mind: The Lost Souls of Tong-Nou. This matters because Eastern Mind is something of a legend, to a certain type of person. It hit store shelves in 1995; Doom had just blown up only a couple years prior, and adventure games were just hitting their stride alongside the FPS rush. Though Eastern Mind wasn’t nearly as approachable as, say, Day of the Tentacle, it was a point-and-click adventure in its own right, but it was also one of the most self-indulgent experiences a fan of the surreal could ever ask for: a niche computer game forged with the psychedelic imagery and distinct technological limitations of the mid-‘90s.

It’s a weird-seeker’s paradise, in other words. In it, you’ll become acquainted with a being who possesses three minds, then commits suicide within the span of ten seconds; you’ll collect important key items like the “Eyeball of Dreaming”; and you’ll visit the Helix Palace, where you could be force-fed until your body explodes. And that’s just the tip of the iceberg. It may only display 256 colors, but it’s a veritable hallucinatory rainbow of iniquities. Ever wanted to meet a creature that “dines on its own legs?” You can in Eastern Mind.

It may only display 256 colors, but it’s a veritable hallucinatory rainbow of iniquities.

It’s a disturbing game, at times, but it’s delightfully weird, and it sits in stark relief to what most modern games would tell us we’re interested in. True to form, people have pointed to the game over the years as a chintzy Japanese obscurity, a too-crazy and “random” adventure that exists only as a novelty—something to point and laugh at when Japanese culture comes up in conversation.

The kooky little game would have eluded me as well if not for Marcus, a friend of mine who had passed on a link to a few errant arrangements from the soundtrack via YouTube. We have a penchant for little-known and niche adventures, and this was one I was overjoyed to have not yet been introduced to.

When I played through it I found that Eastern Mind is less of a game than it is a journey through the inner recesses of the mind of its creator, Osamu Sato. The “protagonist” Rin discovers his soul has been stolen by the titular island of Tong-Nou, and if he can’t reclaim it he’ll eventually wither away and die. After being given a temporary soul to last him just long enough to restore his own, Rin journeys to the island, which actually ends up being an enormous, disembodied human head. It’s bizarre, uncomfortable, yet wholly engrossing stuff.

The years ticked by without notice, and only a handful of sites (notably, The Obscuritory) gave Eastern Mind the exposure it deserved as a sideways commentary on life, death, and the souls that inhabit our physical vessels. It jumped from person to person via torrent and backup copy, leaving a trail of confused yet enlightened gamers in its wake. With distribution through anonymous torrent channels and specific Google searches, it was simple to obtain, but impossible to understand. It’s such an interesting specimen, largely because of the juxtaposition between its status as a little-known game from Japan and the many small clusters of people clamoring for it to find a place among the “weird” out there. For such a small, little-known title it amassed a cult following while remaining largely invisible to most players.

Tumblr, of all places, became a breeding ground for the game, with users posting and reposting links to download it. Fan art, player experiences, and even memes sprang up, with blogs like The Eastern Island acting as meccas for fans to get together and have their questions, hard work, and comments featured in one handy place.

But it wasn’t enough to be able to play this gem—the lone web surfers investigating the dismal darkness of early Japanese PC games were concerned with one huge detail regarding the legacy of Osamu Sato’s most outre achievement: its sequel. Did it really exist? Where? And what was it like?

Osamu Sato himself had been contacted at some point in the middle of the massive investigation to “out” the sequel to Eastern Mind, though he himself wasn’t sure how or where to find a copy. It seemed to be one of those lost games; the search would go on forever. Some saw it as a lost cause, taking to forums like 4chan’s /v/ or the comments section of a popular Cracked article to pooh-pooh the cause.

References to this sequel had been noted at various places; pieces from its accompanying soundtrack having been posted around the internet thanks to eagle-eyed Japanese buyers. Others still considered themselves lucky they ever had the chance to play through any of Sato’s catalogue, given the nature of Western publishers and distributors to skip right over similarly abstract titles.

Did it really exist? Where? And what was it like?

But then everything changed. Visitors to The Obscuritory were greeted with a complete torrent of the game that no one could confirm existed: Chu-Teng. It was 4chan to the rescue; a post from an anonymous user on /vr/ contained a rip of the entire game. Of course, it’s available via less-than-savory means, but its sheer existence is enough to be excited about. It’s here and it’s real. It’s also a little more obvious now as to why it became so hard to find in the first place: the only playable copy, it appeared, was released for Mac gamers, with no PC release available.

Chu-Teng was thought for years to have been either an unfinished prototype, an unprocurable relic, or so rare that only a minuscule amount of players would ever be able to experience it. No amount of research unearthed any details on the game beyond minimal information and rudimentary setups, until now.

And yet, I’m content to view it from afar via YouTube clip compilations, discussions via forums, and articles such as this one. Perhaps it’s never been about the end result, but about the chase itself. We fall in love with the idea of the pursuit; our findings are too sacred to share. Chu-Teng is that “sacred.” Despite having followed the story for several years myself, I’ve not yet plunged headfirst into the game I’ve heard so much about. Is it out of the fear that it won’t be the same kind of head trip as Eastern Mind? Or is it because I’m afraid opening it and treating it like some sort of vanilla executable file will somehow discredit or invalidate the search? What if it doesn’t live up to my expectations? J.D. Salinger fans waited to decades to read the author’s unpublished works, and now that three have trickled out, they’re finding them lackluster.

Still, after all the fanfare, it feels good to close the lid on the mystery I’ve watched unfold, and for all the speculation, I’m happy with sitting back and letting others tear into Chu-Teng while I watch from the sidelines. Though, curiously enough, it seems as though very few, if any, Chu-Teng adopters have played the game at all. If dying is the path to “salvation,” as Eastern Mind teaches, then maybe resisting temptation and appreciating what I have is divine as well.