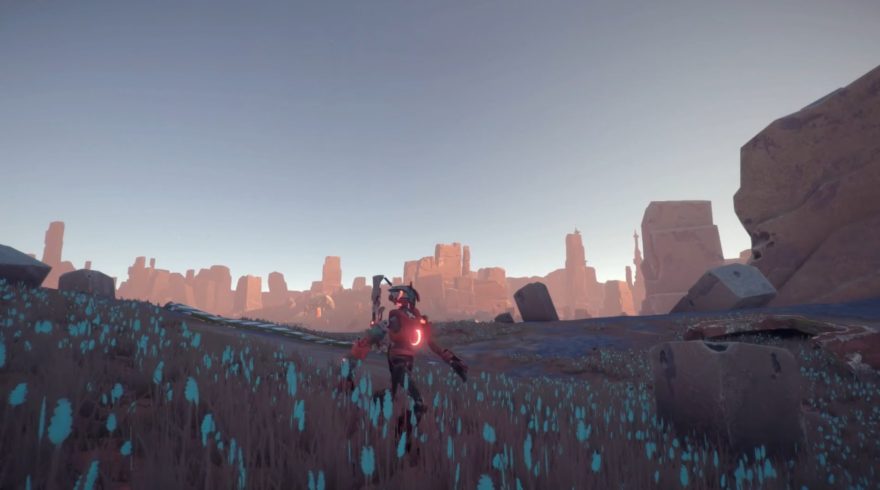 For most players, The Signal From Tölva will be a game about shooting robots and acquiring a range of whirring-and-whistling mechanical guns to do it with. But for some it might also function as an explorable gallery of sci-fi landscapes (just like No Man’s Sky has for some)—sparse wastelands, dingy hazard zones, and alien meadows. This is at least true for its creators at British game studio Big Robot, and especially its creative director Jim Rossignol, who I was told had spent hours carefully considering the placement of rocks in the game at the Eurogamer Expo back in September.

Agonizing over the precise topography of a virtual world is something Big Robot committed to for The Signal From Tölva from the start. After having learned the ways of procedural generation for the marshes and murky villages of their first game, the “tweedpunk” stealth-shooter Sir, You Are Being Hunted (2013), this time the team “wanted to break that down and do something more crafted, both for us and for the player,” according to Rossignol.

This approach has enabled Rossignol to indulge in his pleasure for landscape art, whether it’s sci-fi themed, conjured from our modern world or the past, or photos or paintings. Rossignol told me that landscapes and their depiction is a theme he believes is particularly well served by videogames, picking out the Arma, PlanetSide, and S.T.A.L.K.E.R. series as primary representatives for this argument. “Those prosthetic landscapes!” he said. “A friend of mine once said that ‘PC games are all about terrain’ and I feel like I am an exemplar of that interest. I love terrain within games and I feel like one day I’ll make a walking simulator that is just hiking through incredible landscapes.”

The Signal From Tölva isn’t quite that, being focused on dynamic combat between warring factions of robots, but there’s an element of that fascination with the sublime and bucolic throughout. Most obviously, it can be seen in the “crashed spaceships, dead robots, and weird machines” scattered throughout Tölva‘s world, which is part of an underlying motif that Rossignol called “huge thing abandoned in remote place.” But the game is also more widely rooted in his interest in landscapes, as evidenced by the original name for the game, “Highlands.” That title was born out of Rossignol’s study of highlands and mountainscapes from around the world, used for mood boards that informed the early artwork of the game.

“Ian McQue—who did some concept work for us—is also influenced by this and he shared with me his photography from the Isle Of Skye in Scotland,” Rossignol said. “It was his aesthetic that really led the look and tone of Tölva, and so I was trying to do that justice and also get across the flavor of these places. It’s actually ended up being a little soft and lusher than I’d originally intended—a trip to Iceland left me wanting black, barren rock for miles upon miles—but ultimately it has its own identity which has probably got away from any single vision we had.”

Concept art for The Signal From Tölva

While Big Robot is able to let the world of The Signal From Tölva do more of the storytelling than Sir, You Are Being Hunted‘s might have, it is still only slight. For the most part, the story is still told through media, such as text logs and data that appears when scanning the world, plus there’s a remote character called the Broker (who hasn’t been talked about much) who explains things to the player. Outside of the game, there will be a free novella written by Cass Khaw and a lorebook, both of which give more insight into Tölva‘s world for those who want it.

As to what narrative exposition is available in the game, Rossignol said it fits his preference for videogame storytelling, but added: “I would have been even more cryptic if I thought I could get away with it. Regardless, I like games not being what they seem, or just being weird in some unexplained away. Games are often far too literal, and unable to be the metaphors they should be.” The landscapes of The Signal From Tölva aren’t really meant to hide secrets and contain layers for players to ease out with curious steps. They’re worth paying attention to, of course, but its language is closer to bold punctuation than allegorical prose. As Rossignol put it: “These are big spaces, with big objects in them.”

Even so, the topography is something every player will have to consider, using their binoculars to mark distant enemies, and then drawing up a plan of attack—whether to charge in for up-close firefights and use rocks for cover, or to sit further back and employ the help of allied robots for long-distance battles. The landscapes haven’t been constructed with any specific tactics for each location in mind; Rossignol described the approach as “incidental,” letting situations emerge with the dynamic AI and for players to make use of their surroundings to adapt to it with their own choice of tactics.

You can find out more about The Signal From Tölva on its website. It’s coming out for PC in 2017.