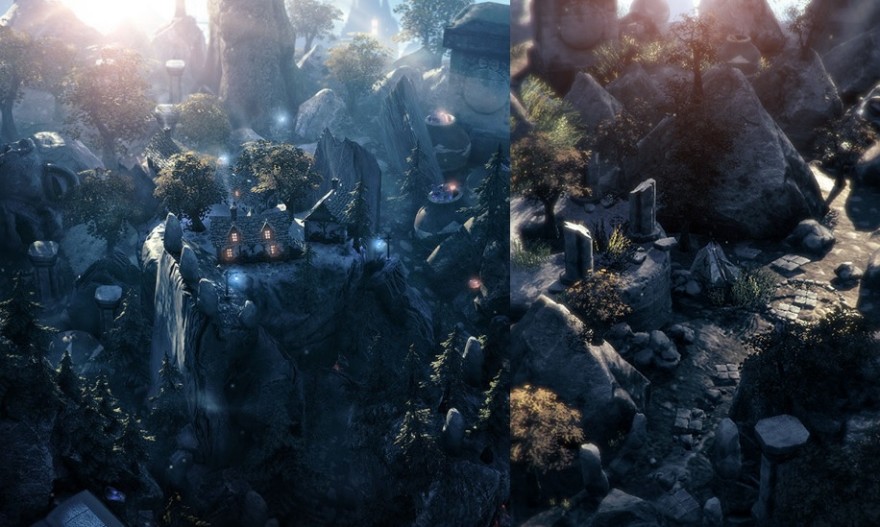 We remarked back in July last year that Richard Whitelock’s upcoming “simple stone throwing game” Quiet as a Stone turned nature into your own personal playground. But it seems a better metaphor would be comparing it to the Mesopotamian mud flats where it is thought humankind’s first buildings were erected. This is a game that ostensibly simulates that important architectural moment in our ancient history.

This insight is born of Whitelock’s latest update on his progress with Quiet as a Stone, which includes how he first came up with the idea, and how it has changed over the months. To start, Quiet as a Stone was intended only as a means to test some of the ideas he has for his larger project, Into This Wilde Abyss, as a smaller and more manageable off-shoot. (It is still that but, my, how it has grown!) His initial idea, or vision, was a child throwing stones at the ground, what Whitelock calls a “canvas for world making.”

This idea wasn’t random. Whitelock decided to mimic Shigeru Miyamoto’s process for coming up with the original The Legend of Zelda. Miyamoto cast himself back to his childhood, when he explored the forests, lakes, and caves of Kyoto, Japan to come up with the formative NES adventure. Whitelock made a similar journey into the past. But the thought didn’t grow legs and coalesce until a particular moment in the present overcame him.

“I distinctly remember a photo walk around Oxford thinking this idea over when I noticed the setting sun glancing over the mud and worn stones of the grounds I was in,” Whitelock writes. “The simple interaction of a stone bouncing from soft mud to hard stone came to mind. I knew I could represent it as I saw it. And I saw a blank canvas for a whole potential world of interactions and atmospheres.”

With this locked down, Whitelock then had to piece it all together, using photogrammetry to create detailed representations of his miniature vertical portraits of rock and dirt. He knew that to encourage players to imagine the potential in these primordial building elements—to have that playful “a-ha” moment when insignificant stones turn into walls and pillars—he needed to achieve a sense of solidity, for it to “feel reactive and graspable.” This progressed with lighting and weather effects being added, but most of the work that Whitelock did was in the audio: ambient breezes, the caw of distant crows, rocks hitting stones, clay pots smashing.

That much would be enough to justify it being described a playground. You throw stones and enjoy them tumbling across the jumbled topography, chiming with a pleasing tactility. This much made Quiet as a Stone a pleasure machine in that it delivered an experience of nature through artificial means. Pachinko for ecologists. But what comes then? Whitelock took it further, not only relying on an imagined architectural space, but an actual one—he added the icons of ruins and eventually entire small villages with adorable country cottages, windows illuminated with signs of life.

“What if Diablo 3 was an art application?”

The idea was becoming fuller, bigger, and it was a time of perplexing clouds of thought. “I was looking for strange, useful questions to ask myself,” Whitelock writes. “What if Diablo 3 was an art application? What would an atmospheric pinball game be like?”

All this, it turns out, is where the game was left months ago, before Whitelock took it to the Eurogamer Expo in September 2015. Having since had people playtest Quiet as a Stone, he has decided to completely rethink how to engineer player creativity, deeming it necessary after some (not all!) left the game bemused and frustrated. He’s now also working on other projects outside of his personal ones so it may be a while yet until Quiet as a Stone emerges from its cubbyhole. For now, await.