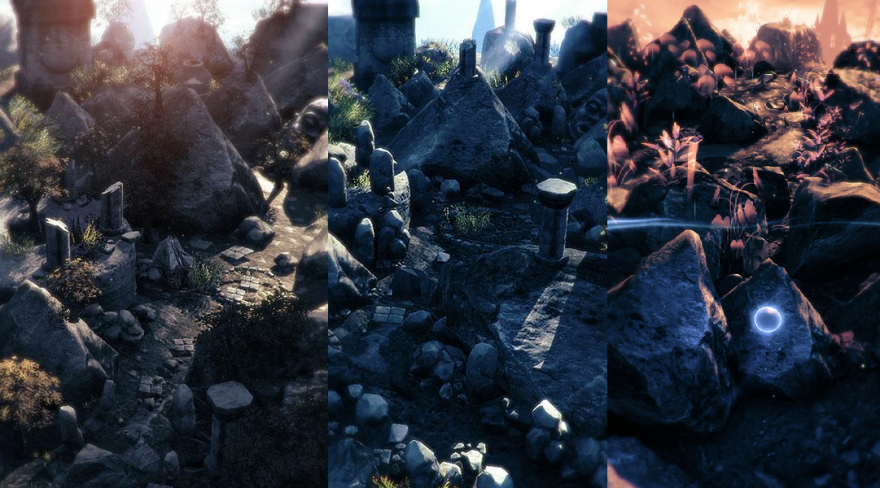 For a game with the word “quiet” in the title, Quiet as a Stone is alive with sound, and some incredibly pleasing ones too.

There’s the hum of wind and water, the noise of nature uninterrupted, then the clatter of rocks and clay pots shattering as the player interferes with the landscape, and finally a cartoony pop to mark the placement of stone, tree, pillar.

So far, Quiet as a Stone looks decidedly different from creator Richard Whitelock’s other project, Into this Wylde Abyss, an upcoming game set in a harsh frozen landscape. Both are gorgeous takes on the majesty of nature, but this new video of Quiet as a Stone demonstrates much calmer scenes, where players can “collect, throw, create, travel, and remake the world” as they wish.

It’s also vertical, which could mean it’s a phone game or Whitelock is experimenting with some new framing techniques: the taller composition allows for a more focused, rolling slice of landscape that a wider shot might detract from. It’s also a form relatively unseen outside mobile games, but I welcome the approach no matter the platform.

According to Whitelock’s blog, Quiet as a Stone is a “simple stone throwing game” and experimental testing ground for ideas he may or may not work into his two other projects, Lantern Slides and Into this Wylde Abyss, the latter of which you can see above.

Whitelock has posted little about Quiet as a Stone so far, but you can keep up with development on his blog.