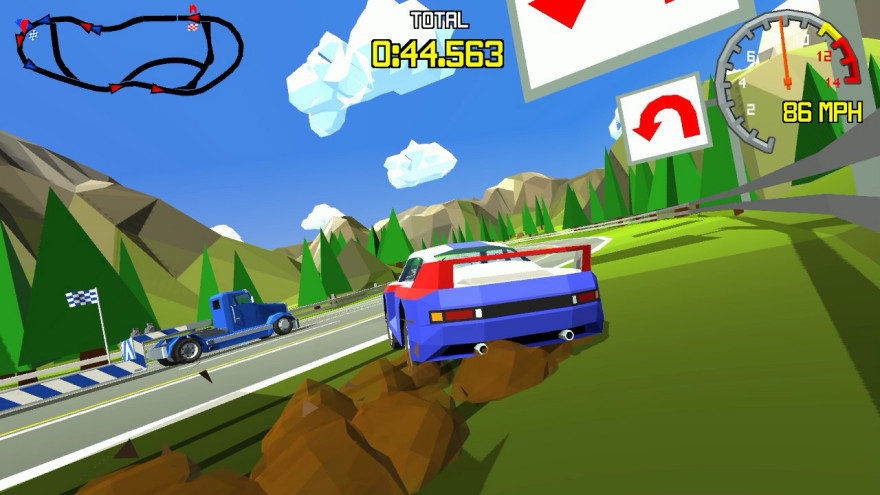 Trevor Ley is looking to the past. Those times, as a kid, when he played arcade racers. Virtua Racing (1992) was a big one for him. He laments that this style of racing game has gone out of fashion. He sees most racers these days emphasizing simulation and realism. That, or they’re trying to be edgy and grimy, imploring us to engage with criminality and spray paint stylized decals across bonnets.

Ley is the founder of Lucky Mountain Games and is currently making his own arcade racer called Racing Apex, which is up on Kickstarter. As with a couple of other studios, the team is taking their inspiration from the ’90s. Watching Racing Apex in motion, I’m instantly reminded of games like Daytona USA (1993)—though, as Ley clarifies, the blocky characters and car combat is specifically taken from the PC game Interstate 76 (1997).

that certainly wouldn’t have worked on dial-up internet

Everything is bright and colorful. But now, with modern hardware and improved screens, the ’90s-style arcade racer can look smoother and sharper. Without going back to look at those older games directly, Racing Apex is what they have come to look like in my mind; preserved in that nostalgic part of your brain where everything looks better. Racing Apex isn’t recreating what those games looked like, it’s what you remember them looking like.

There is a little embellishment, too, of course. Other than the car combat, Racing Apex will also have day and night cycles, car damage, and online multiplayer—that certainly wouldn’t have worked on dial-up internet a couple of decades ago. “It’s not easy to implement, but these elements are a lot of fun and worth doing. I wanted to create a racing game that people would return to,” Ley said. His hope is that players will be encouraged to bring their friends along for the ride, engaging in competition with the car-mounted guns as well as the leaderboards.

Racing Apex has been a labor of love so far for the team at Lucky Mountain Games but their wish is to focus on developing it full-time. That’s why they’ve decided to bring the game to Kickstarter. The hope is that the crowdfunding effort will also enable them to get “racers involved in closed alpha and beta testing, hopefully leading to Early Access.”

Racing Apex is coming to PC, Mac and Linux next year. You can support Racing Apex on Kickstarter and you can also check it out on Steam Greenlight.