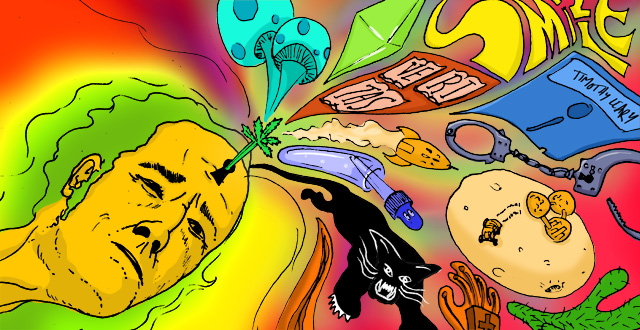 Timothy Leary isn’t remembered for his contributions to videogames. The controversial pop theorist’s body of work consists of exactly one game and a handful of prototypes. For Leary, the trouble with making finished products was a matter of self-restraint. Leary had lofty ideas about the role and function of games. He wanted them to be intimate experiences. He thought they could exhibit the ultimate potential of the mind. As a result, overambitious ideas sunk most of his projects before they ever got started.

It’s a baffling, nonsensical statement about a game that—for obvious reasons—was never made. But coming from a man who conducted research on LSD at Harvard in the ’60s, escaped prison and went on the run with Eldridge Cleaver and the Black Panthers in the ’70s, and evangelized cyberpunk and the oncoming information age in the ’80s, it’s almost convincing.

He wanted to make games that people could touch and, for whatever reason, smell. But even more unexpectedly, he thought games of the ’80s should be more like they are today.

Leary’s foray into games came near the end of a long and eventful life. He began his career in the field of psychology, studying personality disorders, and later played the role of hippie counterculture’s personal shrink. Leary’s prescription for the ills of the generation, such as discrimination and the Vietnam War, was drugs—namely, acid. He built a persona writing and speaking on the virtues of getting high. In the 1970s, while the Summer of Love faded from public consciousness, Leary was busy reinventing himself in prison. He reemerged as a futurist, wildly expounding on the technologies of the future.

As anyone who has heard Leary speak on space migration or life extension can affirm, he was a radical dreamer. Though they drew crowds, his theories were generally dismissed as quackery. Likewise, his ideas about videogames went unchecked by reality. He wrote that “computer screens [had] a powerful, hypnotic ability to create altered states in the brain,” and he saw videogames as a medium for it. He built broad game concepts around brain implants and Jaron Lanier’s data glove. He wanted to make games that people could touch and, for whatever reason, smell. But even more unexpectedly, he thought games of the ’80s should be more like they are today.

“In my software movies, you decide on who the hero will be and what attributes he or she will have. The script keeps coming up and you have choices. At the end, the movie is your unique version,” Leary said in a 1987 interview for Computer Language magazine.

At a time when Ultima and Wizardry were role-playing standards, Leary envisioned games like Mass Effect and Alpha Protocol where players give their characters a personality and make crucial decisions in the plot. He pictured environments similar to the open worlds in Oblivion, where players set off after their own ends. Leary was an outsider to the world of videogames, so it didn’t bother him that such things had not been done. He didn’t realize his ideas were twenty years ahead of their time.

“The environment we were working with in 1985 was a screen resolution of 320×200 pixels, a choice between two sets of four colors, speaker beeps, and a floppy disk. Needless to say, our imaginings outstripped our capabilities,” explains Bob Dietz, a programmer who developed software alongside Leary.

Games that can’t be made are hard to document, and turning up proof of their conception can feel like searching for the proverbial needle. Only scraps of Leary’s unfinished projects remain: a reference to his software company in a Rolling Stone interview here, a mention of a deal with Infocom in a People write-up there. The history is composed of missing links, and its underlying mores are nebulous.

Mind Mirror, Leary’s highly compromised yet only completed game, sheds light on the ambitions of the game designer. Mind Mirror is the strangest kind of game, one that is impossible to understand without context. It’s a text adventure, a mandala visualizer, and a psychiatric tool all rolled into one. It’s also a role-playing game. Not the type where players slay monsters and grind to level up, but the kind where they assume a role and act on it.

The game begins by gathering metrics. The player can be anyone: his ex, his mechanic, his cat, the guy next door he can hear yelling through the wall; anyone. He answers a series of questions about that person, defining their personality. Then, he role-plays through a situation—say a party, or a job interview—as that person.

Mind Mirror aimed to help players understand different types of people. It could be used for personality reconditioning, too. As players react to on-screen prompts, they are scored on how well they fit their role. Say they want to be a rock star. Did they trash the hotel room, or make the bed for the cleaner? The score shows up in a graph that rates their performance. The concept is comparable to morality meters, the current trend that allows players to choose the Dark Side or be the hero of the Wild West.

Leary had a good track record when it came to predicting future game trends. Mind Mirror was also a self-help game, a genre that would eventually develop into games like Brain Age and My Stop Smoking Coach. Things Leary planned on doing with Mind Mirror, but couldn’t pull off, were dead-on too. He had originally wanted Mind Mirror to be online, to be a virtual world, and to be open-ended.

“We began to imagine a city that players could enter as avatars, and where they could interact with other avatars. They could move through the city, going where they wanted, making their own choices, and being evaluated for consistency in a role,” Dietz says.

“In my software movies, you decide on who the hero will be and what attributes he or she will have. The script keeps coming up and you have choices. At the end, the movie is your unique version.”

These features are valuable commodities in today’s games, but at the time, they were practically unheard of. While virtual worlds were on the horizon, and online games gained prominence in the early ’90s, open-world games wouldn’t arrive until the next century with Sega’s prodigal venture Shenmue. Leary had the prescience to foresee these trends and meld them into a game concept in 1985. Regrettably, but also expectedly, the complexity created an impasse.

Online gaming presented a logistical problem: The player had to be able to get online in the first place. Most people simply didn’t have access. A few primitive online games existed at the time. MUDs, or multi-user dungeons—such as Island of Kesmai, the forerunner of massively multiplayer games like World of Warcraft—had been doing online play for a couple of years prior. But these games were reserved for nerdom’s innermost circle, the section of a Venn diagram where D&D players and aspiring computer scientists overlapped.

Lucasfilm’s Habitat provided one of the first casual-focused virtual worlds a few years later, but it was more or less a virtual hangout, and Leary wanted Mind Mirror to be more than that. He wanted it to be a social network and a game. His team wrangled with ways to integrate game rules into a free society.

“We talked a lot about what the goal should be, and decided the player should choose his own goal,” Dietz says. “This got us thinking beyond the limitation that each realm had to be scripted. We had alternate situations so that the choices the player was presented with were random. But they were still predefined. How could we set it up so that people’s actions wrote their own scripts?”

The team never found the solution.

Hindered by the constraints of lumbering mid-’80s-era PCs, an Internet that wasn’t ready for primetime, and questions that took nearly two decades of experimentation to answer, their vision, like a desert mirage, turned to vapors.

Mind Mirror never got graphics or made it online (although the latter will soon be remedied, as Dietz and others are readying a Facebook Application of the game). Its hypothesized sequel, at times referred to as Mind Adventure and Head Coach, never happened. Leary’s stint in gaming went down in history as a failed experiment. Mind Mirror is considered a piece of Leary memorabilia instead of the truly influential game it could have been. And, according to Dietz, it fell “woefully short of [Leary’s] vision.”

Still, if there is a consolation for the remaining members of Leary’s team, it’s in knowing that they had been right all along.