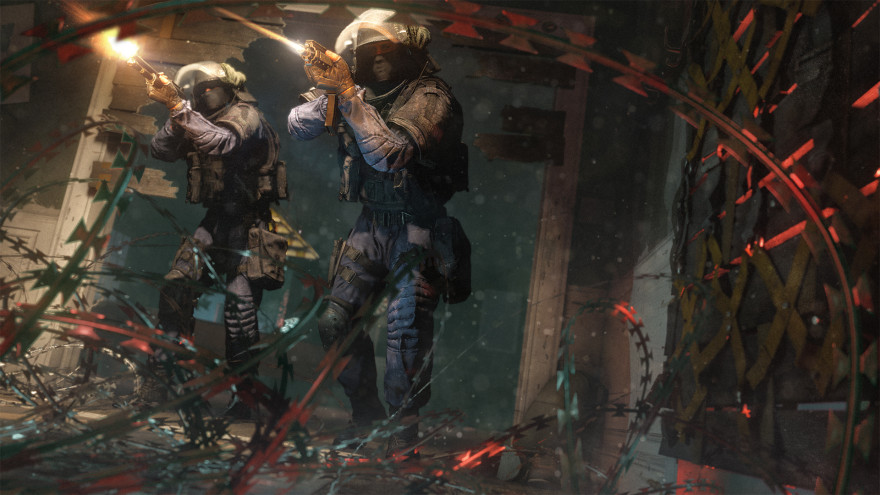 I unfurl a breaching charge like a gift, placing its sealed canvas against a boarded-up wall and letting the adhesive do its work. I huddle flat against a clear section of the same wall, switching the zoom on my scope, and pull the trigger. The glorified garment bag of an explosive bursts in fire and shrapnel, cleaving a roughly man-shaped hole through the splintered wood.

I peek through, inching my crosshairs into the opening, watching for motion. My teammates circle around the other side, preparing their own breach using not an explosive but the messy precision of a sledgehammer, courtesy of another one of our operatives. I look further, further—tracers in the air, furious cones of life-ending warning splattering my screen. I drop before I know what’s happening.

My team’s intrusion goes better. Pop, pop, pop. Just like that, the match is over, and the play’s struck.

If Tom Clancy’s “Rainbow” unit—, a fictitious counter-terrorism unit comprised of operatives on loan from the special forces of various NATO countries—, has a real-world equivalent, it would be JSOC. Created in the 1980s, JSOC (Joint Special Operations Command) is a command within the United States Military that focuses on cooperation between the country’s Special Forces operations; they study tactics, communication protocols, conduct training, and commands the Special Mission Units, in charge of some of the most highly classified military operations the US conducts.

Rainbow Six: Siege seems directly inspired by the actions of JSOC’s most famous Special Mission Unit: SEAL Team Six (named as such to confuse the Soviets—there are no units designated SEAL Teams 1-5). Every match in Siege feels like an homage to the Team Six raid fictionalized in the high-intensity sequence that closes out 2012’s Zero Dark Thirty: all pageantry and team tactics, as one team huddles inside a house or similar structure, constructing defenses and planning ambushes while the other team breaches and clears.

The whole endeavor also has the feeling of a training simulation, a highly theatrical Joint-Readiness Exercise where both sides are equipped and prepared with the highest of the high tech. Sliding metal reinforcements shield walls from breaching, while remote-controlled drones let the offense scout out obstacles before entry.

In keeping with the simulated aesthetic, barricades have painted Xs on them, and furniture is pre-arranged in gunfight-ready configurations. A pretend soldier’s ideal playground. The only thing real is the blood.

Over that backdrop, Rainbow Six: Siege proceeds in a series of thrilling, brief encounters. It’s almost exclusively multiplayer, an usurper reaching for Counter Strike: Global Offensive‘s position as the thinking man’s esports shooter of choice. Over time, competitors can unlock different operatives to play as, giving them new military fetishistic toys to play with, new strategic options to apply to the ritual of government-sanctioned breaking and entering. Or, of course, the wealthy or desperate can spend real money to break down the game’s progress walls with Ubisoft FunBucks.

Rainbow Six: Siege is almost reaching for the position as the thinking man’s esports shooter of choice

Matches here feel legitimately sophisticated. Each encounter will likely only use a fraction of the gizmos or locations on offer, allowing for substantial variation and applied skill. A well-performed match feels like an authored military thriller, precise and cruel.

If only the illusion wasn’t so precarious. Siege is the first Rainbow Six to emphasize multiplayer over all other elements. In that context, the purely competitive focus here could be framed as daring and original, but more often than not it exposes the game to more reality than it can handle. When everything comes together, the experience soars. In practicality, that rarely happens.

When Ubisoft demoed the game for journalists, the players communicated with each other fluidly and articulately, dropping military lingo in hushed tones. In the wild world of online multiplayer, this is not what you’re going to get. Instead, you’ll find, well, the people who play videogames, running the wide gamut from impassioned to silent to twelve-year-olds. And the network support is troublingly unreliable. After a month of play, I still find myself finishing as many matches as I don’t, the smoky loading screen a familiar enemy. No one ever dropped a match in Black Hawk Down.

These are standard, dull videogame complaints. But Rainbow Six: Siege offers a dedication to a precise sort of fantasy, a vision of imagined excellence that seems entirely underserved by the package in which it’s delivered. This is in many ways the most precise, focused Rainbow Six since the first, which focused on intricate pathing and quick deaths in a quasi-realistic simulation of Special Forces soldiery. That game, however, works in part because it’s a closed box, just one roleplaying commander versus a world of AI assailants. The variable factors of online multiplayer break the tenuous illusions Rainbow Six takes as its foundation. Brechtian alienation isn’t a good look here. Without a single-player portion to better service the military fantasy at the series core, Siege runs thin.

Tom Clancy’s world can be a fun place to spend your time, with some caveats. It requires a fundamental buy-in, a choice to ignore the troubling and naïve politics in favor of an idealized, action hero view of who the Special Forces are and what they do. Rainbow Six: Siege has the basic pieces in place to offer that experience but sabotages them by forcing the illusion to rub against the real world in ways the fantasy isn’t prepared to handle. More often than not, playing Siege, one doesn’t feel like a soldier. You feel like a player. And that’s precisely what this game doesn’t want.