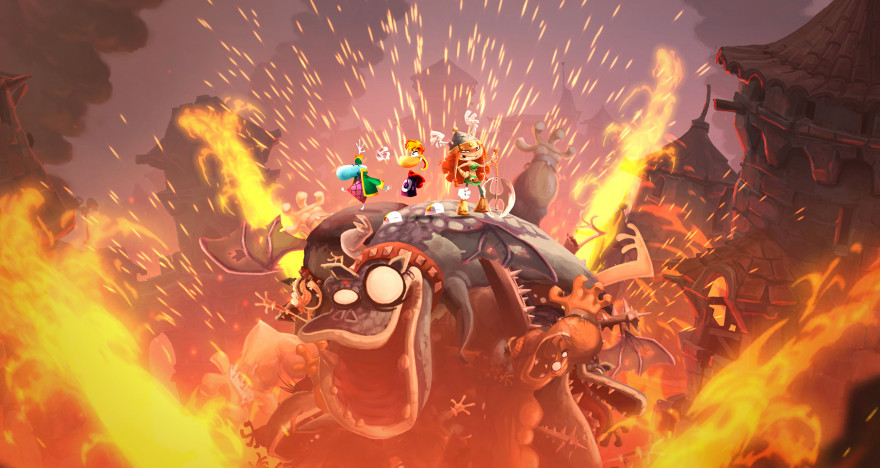 Rayman Legends makes zero sense. Ubisoft Montpellier has taken one of gaming’s oldest genres—the 2D platformer—and pumped it full of nitrous oxide until the boundaries can no longer hold. We’re still laughing when the genre itself explodes. Post-level screens, normally reserved for statistics or skipped altogether, play out like miniature, confetti-drenched bacchanalia with a heavy dose of disco. Successful play unlocks a stable of floating creatures made from balloons and toast.

And then there is the game proper, in which running and jumping covers a mere fraction of the potential activities. Some levels are horizontal-scrolling shooters like Gradius. Some revolve around music-rhythm cover songs of popular karaoke. Sometimes you shrink and slog through the innards of rotted fruit. Sometimes you turn into a duck.

Defeat the requisite boss and you thwack your nemesis out beyond the planet’s atmosphere, where he soars through the stars, eventually landing in the hindquarters of a constellation shaped like a pig. The camera zooms in and you discover that he’s landed upside down in a crater on the surface of some far-off moon inhabited by devil-like creatures. With their pitchforks they jab his backside; each jab sounds a note, with each successive victory adding another musical element—harmonies, bass, percussion—to this strange galactic song. Like I said: Rayman Legends makes zero sense.

The focus never lingers on one element for too long; soon you’ll be using a slingshot to shoot down dragons or glazing massive gingerbread cookies to form walkways. It feels like a return to the experimental days of two decades ago, when, having access to CD-ROM and 32-bit CPUs for the first time, developers pushed on doors never before thought to open. It was a time of marvelously haphazard creativity.

What Ancel and his team do within the expected conventions makes Legends more than a pretty Mario imitation.

Rayman itself came from this period, originally made for the Atari Jaguar before being ported to the Sony PlayStation and finding an audience. The animation and riotous array of color was like nothing seen up to that point. On Rayman Legends, Michel Ancel and his team at Ubisoft Montpellier harness the power of modern systems toward an end greater than just another realistic simulation; they take us back to that time when anything seemed possible. The difference is that now it actually is.

“Legends is a risk,” Ancel admitted to Eurogamer during the recent wrap-party outside their studio. “When you look at people’s everyday lives they’re used to eating the same thing: burger, pizza, some other dish. But they’re not used to trying new things.”

A 2D platformer is a known commodity, of course. But what Ancel and his team do within the expected conventions makes Legends more than a pretty Mario imitation. In many ways, it outshines New Super Mario Bros. U, at least in panache and exuberance. Whereas that game is perhaps Ancel’s aforementioned burger, expertly made, Rayman Legends is a combination platter: mandarin orange slices and potato empanadas, pistachio-crusted rainbow trout with some Comte cheese and fresh leeks, all finished with an oozing volcano chocolate cake. It’s too much: bitter, sweet, salty, umami. But the ecstatic variety is what keeps you coming back, the desire to see what flavor arrives next.

In sheer mechanical variety, then, they one-up Nintendo, but they also prove capable of doing this in an even more mechanical manner: that is, in their utilization of Nintendo’s hardware itself. Rayman Legends was, after all, meant to release exclusively on Wii U, until the system failed to gain traction and Ubisoft decided to port the game to competing platforms. But it’s on the second screen of the Wii U’s GamePad that the flair Ancel and his team have brought to the project is best exhibited.

Eventually it all seems like a sort of inevitability

While playing with the GamePad, the controller’s screen displays a mysterious wooden crate, the surrounding air slowly filling with bubbles. You come to an impassable obstacle, unsure what to do. Then you hear something that sounds like knocking. On the controller, a strange green bug-thing grips its hands into fists and knocking on your controller’s screen. This is Murfy, newly freed from the crate. He flies off the top of your controller screen and into view on your television, where he’ll hold back flaming eyeballs, cut ropes to create a swing, pull up heavy doors, and, of course, tickle enemies.

Little is explained. Eventually it all seems like a sort of inevitability; yes, of course I should release this green super-fly to go tickle the ax-wielding grunt that stands in my way. Maybe Rayman Legends feels so good to play because, in giving you the ridiculous and telling you it’s quite normal, Ancel and his team have designed, in their own way, the most realistic and honest game they could. They have created a universe in which whimsy and exuberance is the norm.