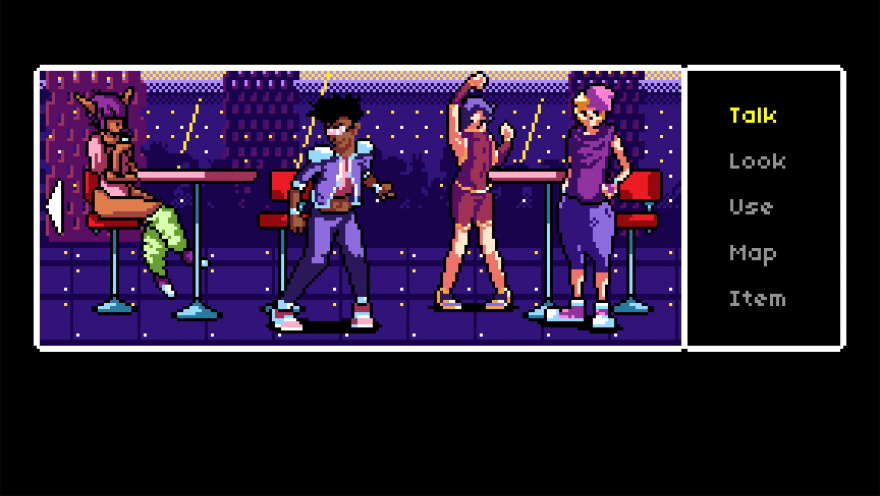 First, a confession: I do not consider myself a cyberpunk “fan.” Don’t get me wrong, I like neon hair and bionic eyes as much as the next girl. But sometimes I get the sense that the genre can get a little … hollow. I mean, what trending genre/phrase/celebrity doesn’t start to seem a bit hollow after its shoved down your throat for the hundredth time?

Cyberpunk and I have a complicated relationship because, on one hand, robot stuff is unequivocally cool. Whether it crops up in reality or stylized imaginings of our near robo-future, there’s a lot to explore in the philosophical questions surrounding man-machine relationships. But on the other hand, the cyberpunk aesthetic has been bastardized to hell, sneaking into everything from Legend of Zelda: Skyward Sword to architecture’s Neo-Futurism movement.

But when Midboss’ released the Read Only Memories demo with “a final(ish) version of the game’s Prologue & Chapter 1” this past week, I did my best to check my cyberpunk baggage at the door. Even though the prologue set the scene in 2064 Neo-San Francisco, I persisted.

After raising funds in December 2013 with the help of both Kickstarter and Ouya, ROM returns to make good on its promise to homage the classic point-and-clicks of the 90’s. With a Use/Look/Talk system of navigation, players solve the occasional object puzzle, while spending most of their time choosing from dialogue trees to trigger branching events. The pixelated cyberpunk aesthetic, to my delight, is deployed with restraint, resulting in a vibrant world that still looks recognizable.

Luckily, most of the narrative in the demo exudes a kind of heart that the subgenre usually struggles with. Developed by the same folks who organize the popular LGBTQ-friendly convention Gaymer X, the storyworld pays touchingly attentive respect to character. Aside from asking the player to determine their preferred pronouns, ROM‘s story actually depends on the multifaceted personalities that populate its world. I found myself asking totally unnecessary NPCs to tell me about their lives, not because I wanted to pump them for relevant information but because I felt genuinely intrigued.

Most importantly, the near-future theme serves a purpose: allowing players to explore a possible society where people can be people, as colorful and different from each other as human beings tend to be. It’s not a Utopia or trying for “realism” by any stretch of the imagination. But ROM shows how a more accepting world isn’t far out of our reach at all. If anything, ROM’s characters read as unnatural in a videogame environment precisely because of their down to earth relatablity.

The plot isn’t groundbreaking territory, but interesting none the less. You’re a novice journalist writing fluff pieces about new gadgets, when your life gets turned upside by a little blue robo-boy named Turing. This ROM (the game’s lingo for “robot”), however, is particularly special—and not just because he seems to harbor an unhealthy obsession for plant life.  He’s special because he’s the beta product of your friend Hayden’s super-secret tinkering with robot sentience. After Hayden gets kidnapped, Turing turns to you, because you’re the most statistically viable option he has (aww, how sweet!)

And here is where ROM started to add to my cyberpunk baggage. Keep in mind, of course, that this is an unfinished product. But, as such, I am hoping that some of their gags and quirky worldbuilding moments are serving as placeholders. As it stands, the demo often suffers form Cyberpunk Hollowness Syndrome, with five or so instances of self-referencing-interweb humor that made me want to hand in my millennial badge and forsake my internet job. Like, for example, the bearded bartender who, after telling me the story of his interesting life, signed off by ordering me to “Stay thirsty, my friend.”

There’s another, harder to swallow “joke” (if I’m reading it correctly) where a news article covers #OccupyGenus, an ongoing battle between ROM-techies and the lower income communities protesting getting pushed out of their Bay area homes by Genus. The “joke” paints a glib and horrid portrait of the protestors, with one saying that the techies are contributing to the overall “doucheification” the city. The Genus employee qupted isn’t much better either, but the joke is obviously more directed at the protestors. If the joke served to make some salient point about this touchy real world subject, I’d be all for seeing it in a videogame. But as it stands, it’s there just to be there, and to poke fun at real life people caught in an extremely shitty situation.

But otherwise, ROM‘s at its best in character driven moments, like when I looked at a random tree and Turing piped up to basically deliver a cyberpunk soliloquy about why he loved this particular tree species the most. Or when he flushed after asking if a fashionable lady’s hat would look good on him, and perked up after I offered to take him shopping. At other points, Turing suffers from Fi syndrome. Fi, for those who don’t remember or tried to forgot, was Skyward Sword‘s nearly game-breaking attempt at creating a cyberpunk version of Navi. Like Fi, Turing as the information dumper of the game, click-clacking unwanted facts and exposition at you during the most unwanted moments. The oversharing in ROM is at least built in as part of his character’s personality. But it’s still pretty transparent. And infuriating.

But, all in all, Read Only Memories proved to be a deserved instance of cyberpunk, which I truly commend it for. As an early preview of what to expect, the demo is certainly worth a spin. For people less jaded by the endless piles of of games tacking on the cyberpunk aesthetic to be trendy, ROM‘s flaws might look less apparent. At the end of the day, the show-stealing characters are simply worth getting to know. It’s clear Midboss spent a lot of time shaping them into real-life versions of pixelated future-people, even publishing public profiles on certain characters to ensure fans felt fully represented by their personalities.

You can play the demo on PC, Mac, and Linux now, with a full version becoming available in the Summer of 2015 for all platforms plus Ouya.