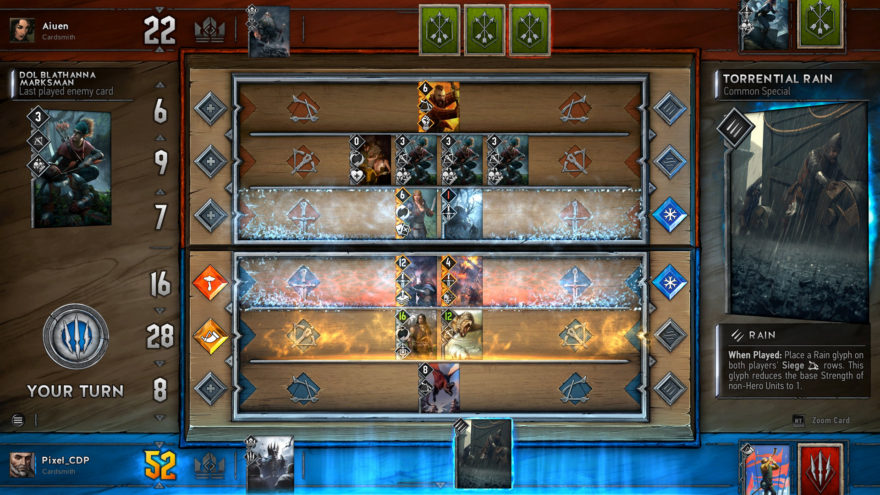 Among the countless hours I spent playing CD Projekt RED’s sprawling open-world adventure The Witcher 3 (2015), too many of those were spent playing Gwent. Whether it was battling against random merchants or innkeepers, or challenging the best players of Novigrad in an effort to win a coveted card of my surrogate daughter, the seemingly simple card game of Gwent wasn’t just another side quest. Gwent transcended the tedious minigame trope and became something wholly enjoyable itself.

I can see myself roaming the pubs of San Francisco to battle friends, as I once did in The Witcher 3’s Velen

During Microsoft’s E3 conference, the Poland-based developer took the stage to announce a standalone, spin-off game based on the beloved minigame, aptly titled Gwent: The Witcher Card Game. “Gwent literally would not exist if the fans hadn’t sent us thousands of emails,” said Damien Monnier, lead designer for CD Projekt RED during a quick interview on YouTube Gaming’s Live at E3 stream. Monnier insists that the new multiplayer-employed Gwent will still have the core mechanics of its The Witcher 3-bound predecessor.

A standalone Gwent likely would not have been able to live were it not for the immense success of Blizzard’s World of Warcraft (2004) virtual card game spin-off Hearthstone (2014). But where Hearthstone was developed from nearly the ground up (aside from lifting some art from the physical World of Warcraft Trading Card Game (2006)), Gwent has the foundation of already being a game, and the ability to be expanded beyond that. Part of the appeal of virtual card games like Hearthstone and Gwent is the portability of it. There’s no more lugging around binders of cards, as many once did with Pokémon or Yu-Gi-Oh cards. With Hearthstone and Gwent, everything is available at all times.

I can see my future now. Roaming the pubs of San Francisco (once Gwent is hopefully readily available on my tablet), as I once did in The Witcher 3’s Velen, seeking out other experienced Gwent-players to play against. With some well-timed cards, I’ll defeat others triumphantly for that one powerful card. Then I’ll pack it in, return home, until the next glorious Gwent challenge awaits.

You can sign up for Gwent: The Witcher Card Game’s beta on PC and Xbox One here.