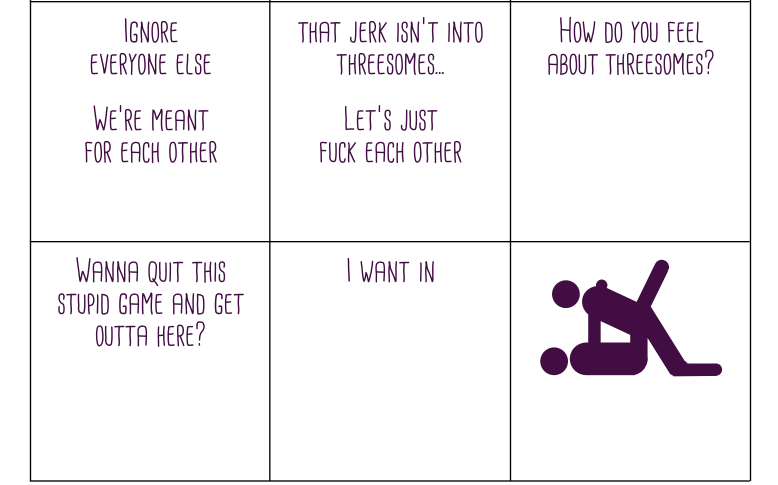 It was a long shot, for sure. But nothing risked, nothing rewarded. So at the office holiday party I popped the question: Does anyone want to play Clusterfuck?

They did not. It was expected, but this seemed like both the best and worst possible opportunity. I still believe it would have been a few rounds of rowdy fun, but the stigma was too powerful: Clusterfuck, a game where the central metaphor is hooking up, is difficult to sell to a bunch of folks who have to look each other in the eye, professionally, the next morning.

Fortunately I was able to play the game later with non-work friends, but that initial outright refusal still captivates me. Clusterfuck is a silly, zany, hilarious party game of subterfuge and deviousness. On the surface, players go through some screwy motions in order to pair up for the night, but more than that, it’s about nonverbal communication. Each participant is silent, having only a few cards to pass around and whatever supposedly meaningful expressions they can come up with, in order to convince specific players that they should choose each other when the voting begins.

Get a table full of revelers and you’ve got a good time. The cards are loaded with innuendo, outright offers, and images from the Kama Sutra done in the style of a restroom sign. Fingers are pointed. Threesomes are subtly arranged, and if successfully executed by all participants pointing at each other when the time comes, a threesome is declared and the game automatically won. But no one likes to be excluded, and a tryst can be busted up if detected by a dejected fourth player flipping off the trio. And beyond that the rules are expandable (to include the joykill Chlamydia) as necessary, with print-and-play cards available on the website for anyone who didn’t get in on Cards Against Humanity’s 12 Days of Bullshit.

But “fuck” is right there in the name and I don’t know if it’s America’s puritanical roots, an East Coast thing, or a hangup of older-ish generations, but a lot of supposedly mature adult people could not get past the “fuck” part of this game. It’s a lightweight clever design that’s somehow obfuscated immediately for so many people by the metaphor of hooking up. I was flabbergasted, and maybe I’m the naive one for it, seeing only the game and not the potential HR lawsuits.

When I was able to finally get a round of Clusterfuck going, it was with a mix of friends new and old, which was the ideal setup. It’s good to have those players with whom you share a near telepathic connection, where it’s especially heartbreaking when between you the message is lost and fingers are flying in opposite directions. But there’s also a rush when you and someone else click immediately, even if you’re only kind of sure what their name is. You have to be obvious, but not too obvious because jealous eyes roam. It’s an act and a giggle and a roar, made for and and a potential catalyst of a great party.

But man, people have a hard time with a casual game about fucking. Maybe high school or college kids, yet to be locked down in “serious” relationships or marriages, can get into the spirit a little more easily. Maybe everyone at the holiday party wasn’t drunk enough, the managers hanging on the periphery. Whatever the reason, I regret nothing. Clusterfuck is to parties as parties are to hooking up.