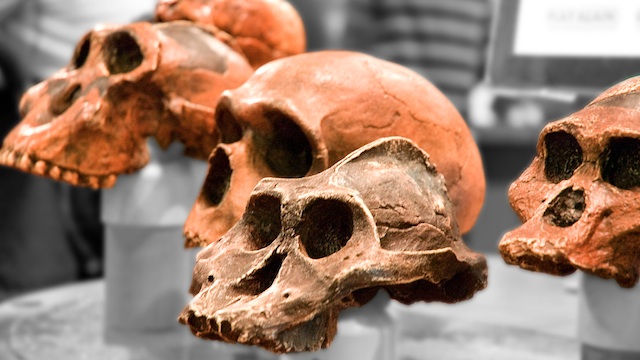 In a highly informative article over at Slate, Chip Walter explains that the reason Homo sapiens outlasted other rival species from the genus Homo, like Neanderthals and those roguish hobbit people (seriously!), is that we have a prolonged childhood which allows us the time for rather frivolous but important developmental activities, like stirring up ant beds and, of course, playing videogames.

Why should adding a childhood help us escape extinction’s pitiless scythe? . . . Those six years of life between ages 1 and 7 are the time when we lay the groundwork for the people we grow up to become. Without childhood you and I would never have the opportunity to step away from the dictates of our genes and develop the talents, quirks, and foibles that make us all the devastatingly charming, adaptable, and distinctive individuals we are.

If follows that if not for some freak conditions of biology, which I’ll get to in a second, our aptitude for playing games would’ve never came to be. Just think, we’d probably all be pushing boulders around right if not for neoteny, a characteristic humans developed that encourages and values lengthy periods of kneading play-doh. But how did this frolicsome period of our lives come to be?

More than a million years ago, our direct ancestors found themselves in a real evolutionary pickle. One the one hand, their brains were growing larger than those of their rain forest cousins, and on the other, they had taken to walking upright because they spent most of their time in Africa’s expanding savannas. Both features would seem to have substantially increased the likelihood of their survival, and they did, except for one problem: Standing upright favors the evolution of narrow hips and therefore narrows the birth canal. And that made bringing larger-headed infants to full term before birth increasingly difficult.

So our evolutionary fore-bearers started giving birth early, and childhood happened. If not for the fact that our prehistoric moms had narrow hips and huge brains, videogames, the domain of play, would have never existed. Welp, that’s one mystery solved!

And I hope you young, plucky Millennials are taking note. Now you have a rebut for the comments section the next time some windbag decides to fulminate about extended adolescence and how the youth of today never grow up. Just tell them: it’s evolution, baby!