I’ve been a God of War apologist for a long time. Even after I grew out of my angry teenage phase, I still found each entry satisfying—despite its overall grossness. The game’s hyperviolence does get a bit too much for me over extended play, and its “colorful” Ed Hardy version of Greek mythology has the subtlety of a jackhammer. Though my interest in the series has waned over the years, I still find its commitment to epic violence worth consideration—even in a gaming landscape replete with multitudes of violence—because no matter how much anyone hates God of War and its focus on wanton aggression, no one could possibly hate it more than its protagonist, Kratos.

“YOU ARE KRATOS AND YOU WILL MURDER THE GOD OF WAR.”

When I bought the game for Playstation 2 in 2005, I was struck by the quote on the back of the box: “YOU ARE KRATOS AND YOU WILL MURDER THE GOD OF WAR.” It was the first time I’d seen the word “murder” as a directed verb in a game description instead of something to fight against. Justice, order, or even some greater good have no bearing on the man called “The Ghost of Sparta,” and his ruthless quest for revenge ramifies across the game’s mythological universe, eventually bringing the world to ruin. Ultimately, the God of War franchise rips itself and its world apart at the seams due to Kratos’ unchecked rage. Playing the God of War saga, then, becomes an act of aggression against both the game and the mythic traditions it seeks to emulate.

At its blood-covered-fist of a heart, the original God of War has the trappings of Greek tragedy and epic. An aristocratic warrior falls from high status due to a character flaw/sin—that poetic quality Aristotle calls “hamartia.” For Kratos, that flaw is rage, calling to mind the invocation of the muse at the beginnings of Homer’s Iliad:

Rage–Goddess, sing the rage of Peleus’ son Achilles, / murderous, doomed, that cost the Achaeans countless losses, / hurling down to the House of Death so many sturdy souls, / great fighters’ souls, but made their bodies carrion, / feasts for the dogs and birds, / and the will of Zeus was moving towards its end. (Translation by Robert Fagles, 1990)

These lines could almost as easily describe Kratos in his quest to murder Ares, the god of war who tricked Kratos into killing his family. The game even begins in medias res as a nod to Greek literature’s famous structural trope of building narrative through past events that led to a dramatic present. Most of the game exists as a flashback, explaining why Kratos casts himself from the cliffs in a vain attempt at suicide. For all its gory crassness, God of War’s structure is deceptively complicated, at least as much so as The Odyssey or The Iliad.

If Greek tragedy and epic are the game’s model, however, Kratos’ story should have ended with his suicide at the end of God of War. The gods refuse to remove the memories he has of killing his family, so taking his own life would seemingly end his tragic arc. The gods, however, rob him of peace by offering him a seat in Olympus as the new god of war, constituting a paradigm shift that eventually erodes his pathos. As a god, Kratos loses what little sympathy he had as a murderer out for revenge, and because the gods have taken his redemptive act from him, he decides to dismantle everything they stand for with unapologetic savagery.

he kills to be liberated from the world of the game

This shift is where I find the God of War saga to become interesting, probably from a position of happenstance rather than intention. With the narrative of the tragic hero no longer in effect, Kratos has no established literary script to follow, even if he did so originally only in the loosest sense. He becomes instead a character with no allegiance, becoming consumed by rage at the beings who denied him his escape. By the time we see Kratos in God of War II, he has lost his wife and daughter as well as his mother and brother all due to the machinations of the gods. Ares led him to kill his wife and child, Zeus imprisoned and cursed his mother to hide his identity as Kratos’ father, and the gods conspired to abduct his brother for fear that he was the prophesied destroyer of Olympus. It’s no wonder Kratos finds that maybe what the world really needs is fewer gods and sets out to bring Olympus to its knees like the world’s most ardent atheist.

In this quest to murder Zeus, however, he also dismantles the ordered world they represent, including the very strictures of the Greek epic cycle. Assassinating the pantheon is Kratos’ escape from the narrative tradition that keeps him bound to repeat endless acts of violence. As a character, Kratos is almost self-aware, as if he knows that he is trapped in the song of Greek rhapsode. Regardless, he no longer kills for reconciliation or even for his own satisfaction; he kills to be liberated from the world of the game. Apparently, the only thing Kratos hates more than indulgent deities is the very concept of someone else controlling him.

It is fitting, then, that he fights with blades chained to his body. Chains appear as a recurring motif in God of War as symbols of the gods’ domination. In God of War III, a massive chain binds Mount Olympus to the earth, and sundering that chain becomes part of Kratos’ monomaniacal mission of destruction. Further, the chains also exhibit the controlling power of the player over Kratos as each action he performs is bound to buttons on the controller. Yanking his chains to make him kill his enemies makes the player complicit in Kratos’ cruelty while simultaneously becoming the apotheosis of control over Kratos that he hates so passionately.

As much as Kratos hates the will of the gods, he hates the player an equal amount. The game calls attention to this particular relationship between player and character in God of War III when Kratos kills Poseidon:

Here, the camera shifts to the victim’s perspective, and the player witnesses firsthand Kratos’s cruelty by becoming his prey. The player directs Kratos to attack the camera in a macabre act of self-destruction, showing Kratos for what he is: a monster hell-bent on ripping anything that threatens to control him. Playing this sequence is an act of self-loathing, directing violence toward the player instead of the enemy. This murder severs any pity that remains for Kratos, leaving nothing but malice and viciousness in this shell of a character.

After this moment, God of War III becomes little more than a series of brutal murders, a steady escalation of violent spectacle. The Olympians, the player, the whole concept of mythological heroism, are fodder for Kratos’s deicidal rampage, and he inflicts plague and devastation on the world with every god he slays. By destroying Olympian order in favor of chaos, he tells himself that he is freeing people to find their own place in the world, but even this flimsy rationalization for his actions is overshadowed by his bloodlust. Ultimately, the only redeeming effects of Kratos’s actions are incidental. His visceral pursuit of revenge leaves the world a wreck from which people can build new traditions—hopefully some not beholden to the hegemonic abuse of Olympian rule that creates monsters like Kratos. 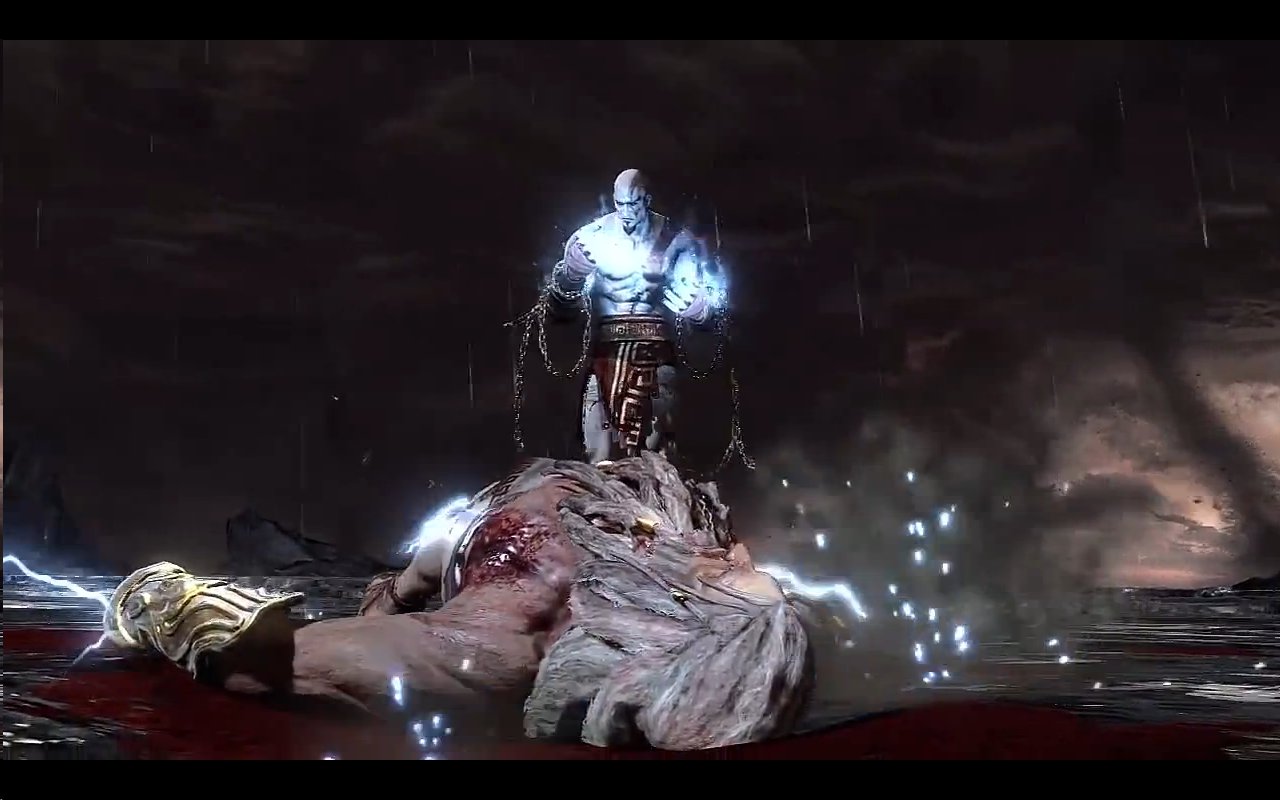 I do not know if such a reading justifies the series’ devotion to cruelty (especially not the saga’s last installment, God of War: Ascension, which was just mean-spirited exploitation for its own sake). God of War III even hedges its bets in its descent into murderous nihilism when it attempts to justify Kratos’s anger with some radically terrible lines about hope in some half-assed effort to redeem a character that literally causes mass destruction because he hates his father. For my part, I cannot say I am eager to return to God of War any time soon. Kratos remains as loathsome as he is callous, his own nihilism reflecting my own disgust at the actions the game asks me to perform.

Still, God of War’s connection to the mythic tradition Kratos dismantles—as incidental as it may be—affords the God of War saga some tenuous value outside of mere violent spectacle. Granted on the spectrum of games that explore violence, God of War fits closer to the recent iterations of Mortal Kombat than the more introspective depth found in Far Cry 2, Wolfenstein: The New Order, or Spec Ops: The Line. I, nevertheless, wonder if Kratos’s rampant disregard for the universe he inhabits inadvertently reveals the exhaustion with violence and anger being his only defining characteristic. At a time when dreck like Hatred promises a cathartic release through mass violence, maybe God of War provides the slightest glimmer of accidental insight into how games cannot stop tearing at the source material until there’s nothing left to rend.