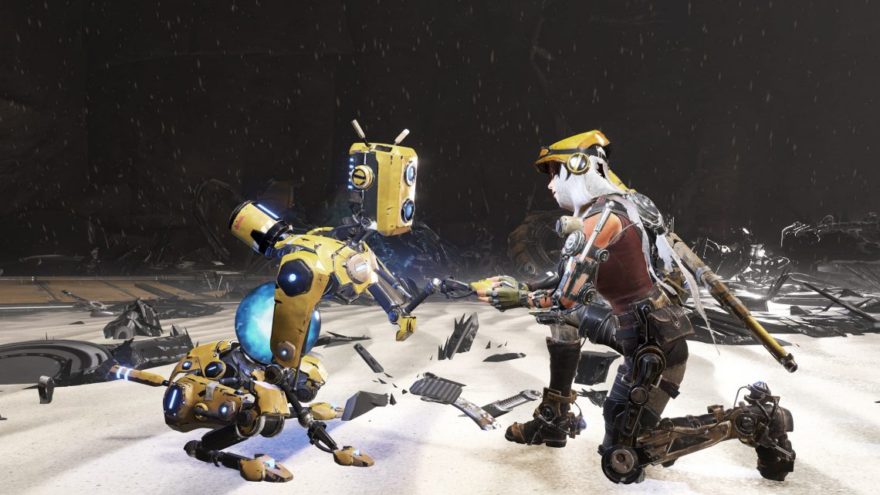 “The old dog barks backwards without getting up.

I can remember when he was a pup.”

— Robert Frost, “The Span of Life”

ReCore was supposed to be about a woman and her dog—her robotic dog. Its biggest fault is that it isn’t.

Joule is part of a group of colonists sent to Far Eden after Earth became uninhabitable. She’s been in cryosleep for a long, long time—Mack, her robot dog, has been chasing his tail for at least a century, I guess. She awakes to find herself alone on Far Eden; the terraforming process there having failed. Corebots sent to aid in the process went rogue. Much of the idea surrounding ReCore is that Joule wouldn’t be able to survive on Far Eden alone. That’s what makes Mack so important—he’s her lifeline.

ReCore begins to tease out the big ideas underlying the human need to seek companionship early on. It seems to have things to say about loneliness, about the bonds humans form out of necessity. Through found audio logs recorded by Joule’s father, it’s revealed that Mack was a gift to his daughter—the dog that Joule always wanted. But Mack isn’t only a sign of affection. As Joule’s mother faced death due to the affliction that forced humanity off Earth, her fear wasn’t of dying, but of something happening to Joule’s father, and Joule being left alone. Mack comes to represent that familial crisis and carries the weight of a parent’s hope for their child. But ReCore almost seems embarrassed of this story as it’s hidden away in a place that some won’t even find.

Perhaps that much could be forgiven if it’s meant as a reward for those who do explore the dunes. But then the game shuts that argument down as it forces you to toss Mack aside for a new companion, one that’s required to beat later game challenges. In the face of looming ruin, Joule’s parents enlisted Mack as her support—the pet robot a symbol at the center of the game. Mere hours after this is established, ReCore rips all of it away, the addition of new companions undoing everything it just laid out. Unsurprisingly, the follow-up relationships with the other corebots feel thin. The game’s strengths begin to taper.

This restriction adds a ton of arduous back and forth

What’s particularly odd is that it’s implicit in ReCore that the companion robots aren’t just pals that come and go. Exposition spread throughout the game states that many of the companions—the ones who haven’t gone bad—have stayed with their humans for years while they are in cryosleep. They express worry and joy for their humans. In one scene, Joule comes across a corebot called Duncan alone in an abandoned crawler. Drawings on the walls vaguely unwind the story of the bad guys and what happened since the terraforming went wrong. Then Joule finds a human dead in his cryosleep chamber—Duncan’s former owner. Duncan lashes out at Joule at first. But she soon realizes this is out of protection for its owner, with whom Duncan seemingly stayed beside for years; safeguarding him, documenting what’s happened. Another corebot, Violet, speaks at length about this sort of dedication and partnership with humans that corebots have. These small stories are ReCore hitting its best notes. Which is why it seems bizarre that, not only are they hidden in encrypted audio logs scattered throughout the world, but that the rest of the game actively works against these ideas.

What is learned through these stories is that no human-corebot relationship can be as strong as the original. That proves to be the case once Mack departs—not just figuratively, but in how the game plays out. The problem is that you can only access two companion corebots at a time, and in the end-game, I found I needed the others more than I needed Mack—despite not wanting to let him go. This restriction adds a ton of arduous back and forth to ReCore. Every upgrade to your corebots requires a trip back to the crawler. You might stumble into a dungeon to find that a different corebot companion is then needed to get through the next area, so it’s back to the ship once again to switch them out. Sure, ReCore does have a fast-travel system in place, but the game’s excessive loading times make it faster to walk. All of this could be solved by giving you access to more than two corebots, but the limitation in itself seems to be born out of an insecurity over the game’s length. There’s a sense that the designers would rather force you to tread over old ground just to rack up the minutes—poking and prodding players into an avoidable cycle of repetition—rather than deliver a smoother, shorter experience. Indeed, the decision to have multiple corebots, rather than just Mack, feels like it comes from the same place: sacrificing the chance to craft a more meaningful, touching story in favor of giving players more shit to do.

ReCore goes and throws it all away

That’s not to say that the other companions are completely not worth your time. The sections with Seth, the shy spider-like dude that can climb walls and fling Joule to places she’d never be able to reach otherwise, are some of my favorite in the game. Duncan, the hulking robot gorilla who can smash rocks, ain’t bad either. But there’s no sentiment attached to these characters. And there’s no real reason why Mack couldn’t have been learned their abilities, either—he’s a robot after all, perhaps Joule could have found new parts or mods for him. At least that way the game could have had new challenges without abandoning its strongest motif. But no, Comcept slapped in more corebots and more restrictions with them, presumably in pursuit of a facade of depth. It’s what gives ReCore the pretense of a rambling novel, when in fact the sharp focus of a poet’s couplet would have proven more effective.

It’s a shame this has to be said, but here goes: something short is not something bad. Robert Frost was able to convey a lifetime’s worth of memories in 16 words in his poem “The Span of Life.” In Frost’s poem, a dog’s life is a measure of a human’s life; by remembering when the dog was a puppy, the speaker is recognizing the changes he’s seen in his life too. ReCore’s first couple of hours move towards setting up a metaphor of this calibre. Mack’s yips and yaps have meaning to Joule—something you, as the player, aren’t privy to. The private language between the two conveys the same sort of history and understanding that Frost’s poem does. Then, as said, ReCore goes and throws it all away.

By the game’s end, I found I didn’t care about any of the characters. Instead, I was fed up, hunting down the rest of the prismatic cores in order to reach the end. The game had done a full 180. It’s a major disappointment, given the promise ReCore shows at its beginning, when it’s just Joule and Mack. The ending appeared to be setting up ReCore for a sequel which, if true—and I hope it is, I actually want to see this done right—the designers will need to use a bit more restraint. Or maybe a sequel is already going against that idea.