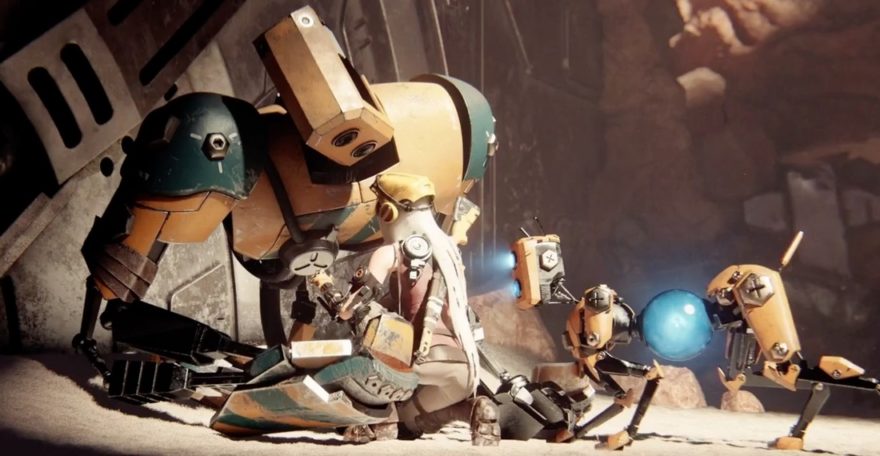 ReCore belongs to a grand storytelling tradition. From Forbidden Planet (1956) to Big Hero 6 (2014), Isaac Asimov to Fallout 4 (2015), science fiction has long been preoccupied with the bond between humanity and machines. So have I, for that matter—my earliest memory is being hospitalized for pneumonia at age two and getting to interact with a remote-control robot in the hospital’s playroom. There’s something incredibly powerful about the notion that we’ll one day create automated beings with superior intelligences and mechanical bodies that’ll outlive us all.

First announced at last year’s Microsoft E3 Briefing, ReCore is the story of a young woman named Joule Adams and her robotic canine, wandering a storm-ravaged desert called Far Eden and fending off hostile machines in the wake of some mysterious world-ending event. It might be worrisome that the worldbuilding appears to be equal parts Destiny (2014) and WALL-E (2008), if not for the sheer undeniable talent behind the project.

her companion thrums to life in its new form

The game is being directed by Mark Pacini (Metroid Prime), produced by Keiji Inafune (Mega Man), and written by Joseph Staten (Halo). From what we’ve seen so far, the combat system and story of ReCore share little with these superstar designers’ previous games, though it does seem to fall into the narrative trap of having to shoot everything in sight in order to progress through the world. This may not be such a bad thing, so long as there’s a degree of something (anything) mechanically different to every other shooter out there happening as part of the deal, though the most interesting thing about the game so far has to do with repairs.

When Joule’s “Corebot companion” Mack sacrifices itself to save her from a band of spiderlike foes in the game’s 2015 announcement trailer, it leaves behind a glowing spherical core. Joule retrieves the core and places it inside the body of a dormant, much larger robot, and her companion thrums to life in its new form. Yesterday’s E3 2016 trailer shows the player wielding a grappling hook to swipe the cores of enemy machines to revive and, presumably, upgrade your Corebot companions.

I’m reminded of the Pokémon-esque Super NES game called Robotrek (1994), in which the player character builds and maintains a team of robots to defend himself on his quest to save the planet of Quintenix from a sinister faction called the Hackers. Except that this time around, Joule is among the last humans in a world dominated by technology—a clear example of the emerging scavenger archetype. See also: Rey in The Force Awakens (2015), D.va’s “Scavenger” and “Junker” skins in Overwatch, WALL-E, and Nausicaa of the Valley of the Wind (1984).

“As one of the last remaining humans on a planet controlled by robotic foes bent on your destruction,” the Xbox.com product description explains, “you must forge friendships with a courageous group of robot companions, each with unique abilities and powers. Lead this band of unlikely heroes on an epic adventure through a mysterious, dynamic world.”

ReCore is slated for a September 13 release on Windows 10 and Xbox One.