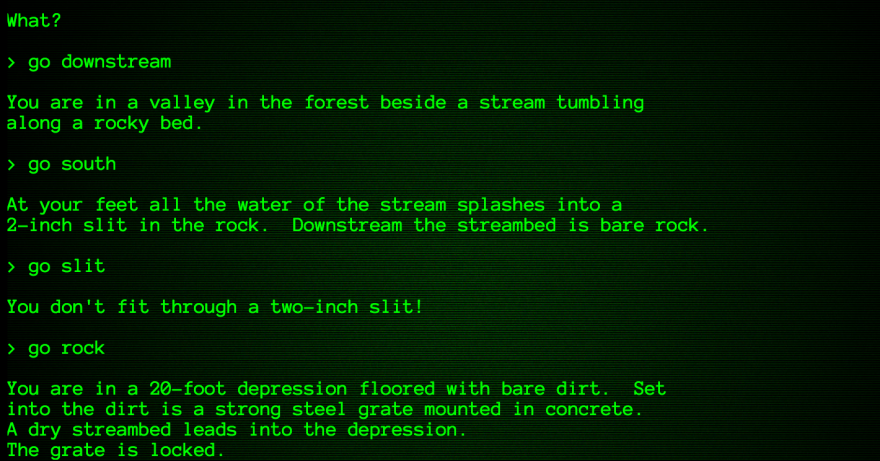 In the ‘60s and ‘70s, IBM produced “mainframe computers”—the room-filling monstrosities we chortle at today. Housed in universities, hospitals, and businesses, these computers were also the source of many of the earliest videogames, which today we call “mainframe games.” Many of them have been lost to history, but we may be seeing something of a comeback for them. Just last month, AMC released its recreation of 1976 text-based cave exploration adventure game Colossal Cave Adventure—complete with newly designed pictures—in preparation for the second season of their 1980s computer period drama Halt and Catch Fire.

And now, Wander, a 1974 mainframe game that had disappeared over the course of decades, has wandered its way back into the hands of the public. It predates Colossal Cave Adventure and is often considered one of the first text-based adventure games. Ant of Retroactive Fiction, a website devoted to restoring interest in older 1970s and ‘80s games, contacted Wander creator Peter Langston after seeing the game on a list of “lost mainframe games.” Langston responded with files and multiple versions of the game that he found in an archived email his friend had saved of it. It’s now up on GitHub for those who want to trek through castles, explore the ruins of a library and take a trip through space—that is, if you know how to install the code on your computer.

The reason why some of these mainframe games disappeared from existence primarily had to do with the hardware. Mainframe computers were expensive, extensive and massive computing systems usually owned by large corporations or educational facilities, like University of Illinois’s ‘60s e-learning system PLATO (the first of its kind). Apparently, even though NASA powered down their last one in 2012 to fully switch to supercomputers, they’re still one of IBM’s most lucrative products, with the latest, cheapest model currently priced at $75,000. (They can reach upwards of one million dollars). The cost and size of the mainframe was what aided in the disappearance of many old games: Writing code for games on these computers was usually done so illicitly, which meant games were not shared as frequently. It seems Wander had a larger distribution, according Jason Dyer and Ant, but still managed to disappear from the radar.

With Langston redistributing his game to the masses, we may hopefully see more ‘60s and ‘70s mainframe games cropping up. While newer text-based games are being created on the regular—I used to play Homestar Runner’s Dungeon Man religiously, and Twine games have become a form unto themselves—it’s cool to see the older code being rediscovered and redistributed. Hopefully, one day, we’ll have more user-friendly variations of them to feed every piqued curiosity.