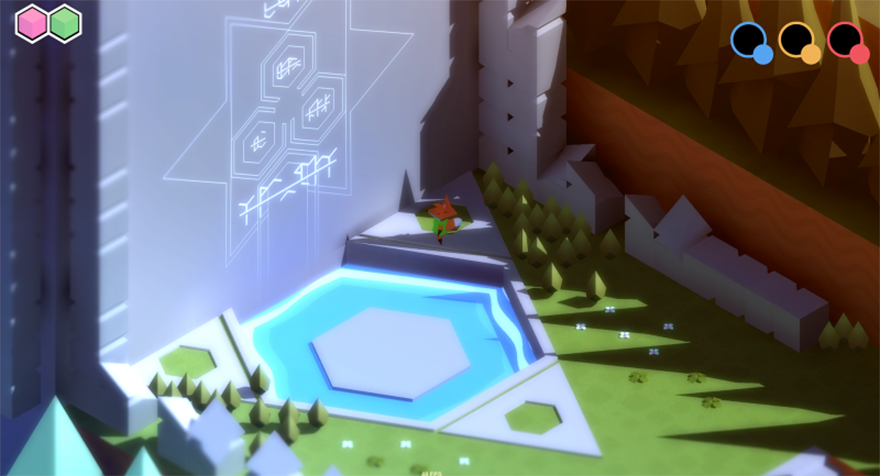 Adventure has long been part of the foundation of videogames, for natural reasons: when you’re interacting with something, you’re implicitly being asked to explore and discover. In this sense, all games are adventure games. The genre-specific tropes of the “adventure game,” meanwhile, have become part of the basic language of what is expected from narrative interactive art. The image of the hero with a sword advancing through a large, unknown world is both a symbol and a cliché of the entire medium. It is classical.

Paying tribute to the tradition of adventure games while also being idiosyncratically its own thing, Andrew Shouldice’s Secret Legend strikes a strong balance between the past and the present. The player controls a small, charismatic human-like fox finding his way along in a large open world of rolling hills, caverns, collapsing temples, and the sort. You find keys to open doors, avoid enemies (sentient globules, jagged ice creatures, and strong-shouldered minotaurs among them) until you find a weapon to attack them with, learn how to swoop your fox tail around, and so on. It draws heavy inspiration from the template of the original The Legend of Zelda, dropping you into a fantasy world with no context and letting you figure out how to survive and progress—and it has a similar feeling of secrets hidden everywhere, waiting for you to find them.

Visually, Shouldice has mixed low-poly art with rich, high-definition colors and shading. In how it plays and how it looks, it can feel like some legendary lost game, maybe a long-rumored Jaguar title just now resurfacing. The musical contributions of Terence Lee create a beautiful companion to this style, supporting the game with a gentle, full ambiance that feels both contemporary and a little dislodged from time.

Secret Legend is not a game that presents itself loudly. It does not feel like it is trying to dominate a conversation or crush other games into oblivion. This immediate sense of respect for smallness is one of the game’s most inviting traits; right from its ethereal prologue, which sets a specific, warm tone of combined melancholy and optimism, Secret Legend seems focused on drawing people into the intimacy of its world. Though there are many creatures to fight, and weapons to upgrade to, and skills that help you avoid dying, the emphasis here is on exploration. The game encourages you to spend time wandering its landscape, to approach its mysteries and answer them for yourself.

It creates this mystery through careful details: the faded focus on the corners of the frame which give a hazy vignetting to the edges of what you are able to see (invoking both the one-step-at-a-time adventuring of Bastion and a more general, foggy nostalgia); or, the intentionally indecipherable, runic language that appears in the game’s menus and prompts, used less for giving information and more for standing in for the idea of language. These touches help to make the player feel dwarfed inside of the game, to give the impression that this world is somehow “not for you”—and yet, because of what it suggests about the answers being just out of reach, it encourages the player to embrace these mysteries so that she might find a more joyous sense of exploration.

It is the ideological opposite to a game like, say, Dark Souls: though you will certainly die as you make your way, through trial and error, around the world map, Secret Legend never feels like it is punishing you. It is about accumulation, not loss; progression, not being forced backwards. There is a real pleasure to finding the right key that unlocks a gate, or making a new turn and suddenly finding the stronger sword with which to defeat the monsters that were previously blocking your way. The game does not lay these solutions out for you, and it makes you feel clever when you solve its problems. After years of so many dismal, torturous, agonized doomscapes in games, there is something revitalizing about being in a world where the grass is green, the water is blue, and a little fox walks around in a tunic. A world that feels alive, and not decaying.

There’s no word on release date for Secret Legend yet. The only platform confirmed as of this writing is PC.