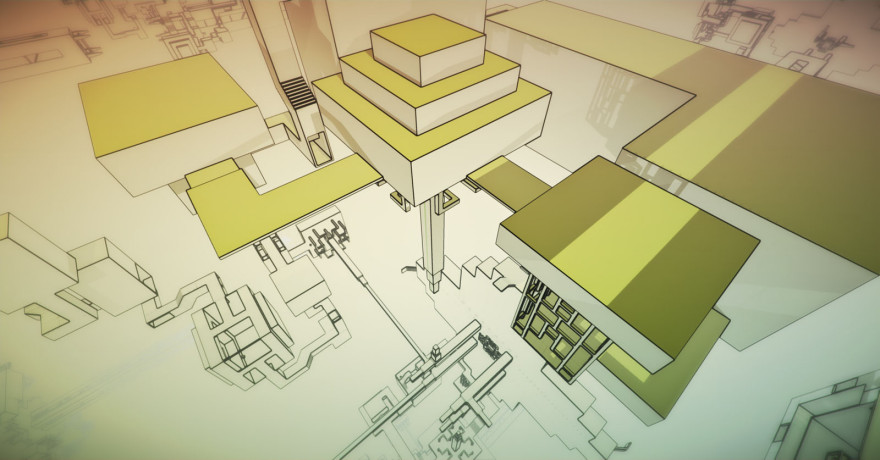 For Willy Chyr, everything is locking into place all at once. There’s probably a click echoing through the cosmos in his name right now. Don’t listen for it, but know that if it exists, it’s satisfying in the way cracking your joints is, or crunching into that first thick-cut potato chip.

For the past two years, Chyr has been working by himself on Relativity; an ornate metropolis of virtual architecture that doubles up as puzzle pieces. Only recently, as little as a few months ago, has it moved beyond being a series of disembodied enigmas and random spaces. Then, after a lot of searching, he had that moment. Everything aligned as one. It was unified. Parts became whole. For the first time, he knew what the game was all about.

Angles bend in ways that make no sense.

Wisely, Chyr is keeping his new-found insight into his own work a secret. So we’re left to our own devices—as we will be once inside that virtual puzzle box—to decipher what’s going on inside Relativity. What we do know is that, similar to Monument Valley, you’re expected to navigate floating dioramas that are structured in a manner that should baffle our perception. Angles bend in ways that make no sense. Staircases braced against every incline reveal a topographical interest in climbing. You fall to the bottom of the world to reappear at its top in seamless transition. It’s a universe that repeats endlessly in every direction and that operates on a different set of physical laws.

The most significant change that Relativity has been through since its inception is how its central gravity shifting idea was inverted. At first, it was the world that shifted rather than the player. “The problem with this version was that as soon as you rotated the world once, all the objects would slide to the bottom corner and the entire level would be a mess,” Chyr said. It took him four months of working on this idea before he realized that the solution was to have the player change orientation while the world remained still. Everything else has branched out from that first revelation.

When Chyr talks about how Relativity came together over the months and years, he compares it to learning a language. Due to its mathematical complexity, and self-contained rules of physics, not a lot of traditional game design could be cross-referenced. So he’s had to invent a completely new vocabulary. Chyr’s example is how, in a lot of 3D worlds, a tower or castle is often used as a reference point for players to orientate themselves; a trusty landmark. But in Relativity, there is no consistent up and down—progression comes at all angles, and it’s entirely possible for objects to be simultaneously above and below you—”height is meaningless,” Chyr said.

“I absolutely love the scale of the world in NaissanceE”

He had to find new angles. As with the world he’s grafting, a tilt was required, a shift in perspective, to find what he needed to make it all work. Chyr hasn’t yet revealed what techniques he fell upon that acted as equivalent design solutions, filling the same holes with new shapes. But he did say it took a lot of repeated and arduous playtesting to arrive at them. A similar story can be told about Alexander Bruce, the solo designer behind the flabbergasting non-Euclidean geometry and psychological puzzles of Antichamber. Bruce toiled over the ideas in Antichamber for three years before trying to realize them as a videogame. And when he started, it took him another three years and several bouts of testing, as well as unexpected emotional hardships, to finish it.

Chyr has examined Antichamber, and has worked to integrate its pacing, especially in the first hour, in Relativity. The key to this, Chyr realized, is to constantly give the player something new, never presenting the same puzzle twice. So there are cubes to move, switches to push, towers to climb, trees to turn on their side. Antichamber isn’t the only purveyor. Chyr has also fallen for the beguiling brutalist architecture and world building of Limasse Five’s NaissanceE. “I absolutely love the scale of the world in NaissanceE and how expansive it appears. That’s something that I’ve brought into Relativity as well, with each level being infinite in size through its own repetition,” Chyr said.

There’s another, less obvious bellwether leading Chyr to Relativity‘s final composition: Starseed Pilgrim. Alexander Martin’s subtle 2D puzzler differs from others due to its obfuscation of purpose. You enter its world, plant seeds, watch them grow into cubes, and wonder why. Eventually, patterns emerge, you learn to use the seeds to climb into white space, but even then there’s an existential question that goes unanswered. It’s a mystery fuelled by curiosity and idle play, flowering a petal at a time, and refusing to budge an inch on revealing its mysteries.

For Chyr, it’s how Starseed Pilgrim focuses on its mechanics as an “embedded layer of systems” that resonated, and that is also an important aspect of Relativity. Speaking of Relativity in comparison to Starseed Pilgrim, Chyr revealed that “you can pick up a box and place it on a switch to open a door, but that box is actually part of a much larger ecosystem of mechanics, and part of progressing through the game is discovering that ecosystem.”

left his confidence in limbo

With Relativity being the first videogame that Chyr has ever worked on he has always second guessed his ability and ideas. He has never been sure if something was working, was perhaps even interesting, or if he was just being delusional. With no experience, he’s not had any measurement for his success so far, and that’s left his confidence in limbo. This has now changed with the backing of Indie Fund.

Comprised of people whose own creative efforts in the videogame space has led to Chyr’s utter respect, Indie Fund’s approval and financing is wholly reassuring. “It lets me know that I’m on the right path,” Chyr said. With the funding, Chyr has been able to bring on a programmer to help him out, granting him the time to focus solely on Relativity‘s design. It has proven to be the nudge that has exceeded the final ridge in the lock. With it, Relativity is fastened, bolted, and should be completely secure. Whereas before it resembled mess as a space—lined with the cloistered barracks of a mind at war with itself—it now has harmony, each pocket of math and construction complementing one another.

“There’s still quite a bit of work ahead, but I think it’s going to be easier moving forward,” Chyr said. What he didn’t make clear was which direction forward might be.

You can find out more about Relativity on its website.