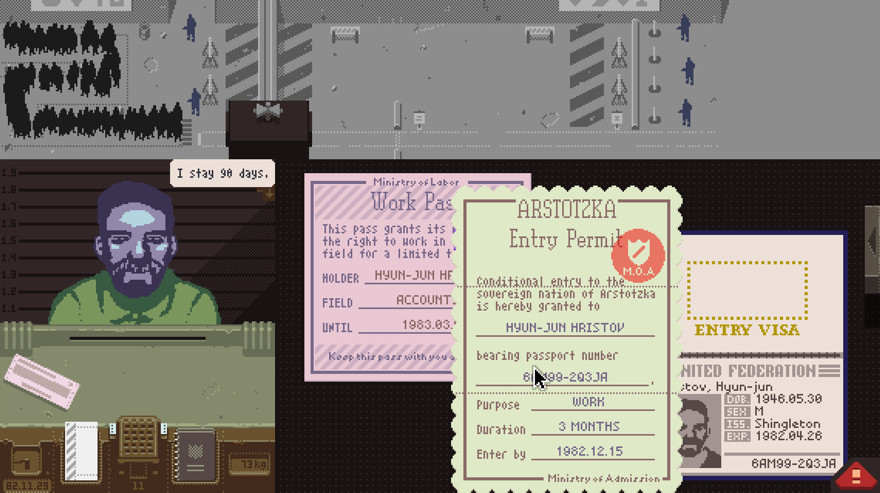 Remember Argo? Ostensibly the story of a successful exfiltration of American consular staff from Iran, the Best Picture winner at the 85th Academy Awards, was really a film about paperwork. For all of its amusing intricacies, the plan put in place by Tony Mendez (Ben Affleck) is entirely dependent on Iranian border officials’ inability to determine that the entrance papers they are being given are fraudulent. They are unable to do so in a timely manner because old-fashioned papers are hard to search and sort. If they had iPads, Argo would end differently.

You, on the other hand, can become an iPad-wielding border agent now that Papers, Please is being released for Apple’s tablet. However, as a border control agent in the made-up dictatorship of Arstotzka, you will still have to deal with paper documents as you try to weed out smugglers, spies, and other undesirables. The incongruity of asking for papers while tapping away at an iPad is, in its own right, an interesting commentary on the nature of border patrolling. Things change but the task remains inefficient and menial.

Papers, Please’s iPad release has already raised an interesting question about technology in border patrolling. The game’s full-body scanners, which you can use to find hidden contraband, were initially flagged as pornography by Apple and therefore rejected from the App Store. This decision has since been reversed, and an update has restored the feature (although nudity is still turned off by default). For the sake of the moral dilemmas in Papers, Please’s narrative, this is a merciful decision. But is it correct? Is it so unreasonable to worry that border guards sometimes use body scanners to fabricate what can only be described as pornography? Apple is not the company to settle the years-old body scanner debate but, in this case, its first instinct may not have been entirely wrong. The iPad release of Papers, Please is a metatextual commentary on the policing of borders. The game itself has even more to say on that subject.