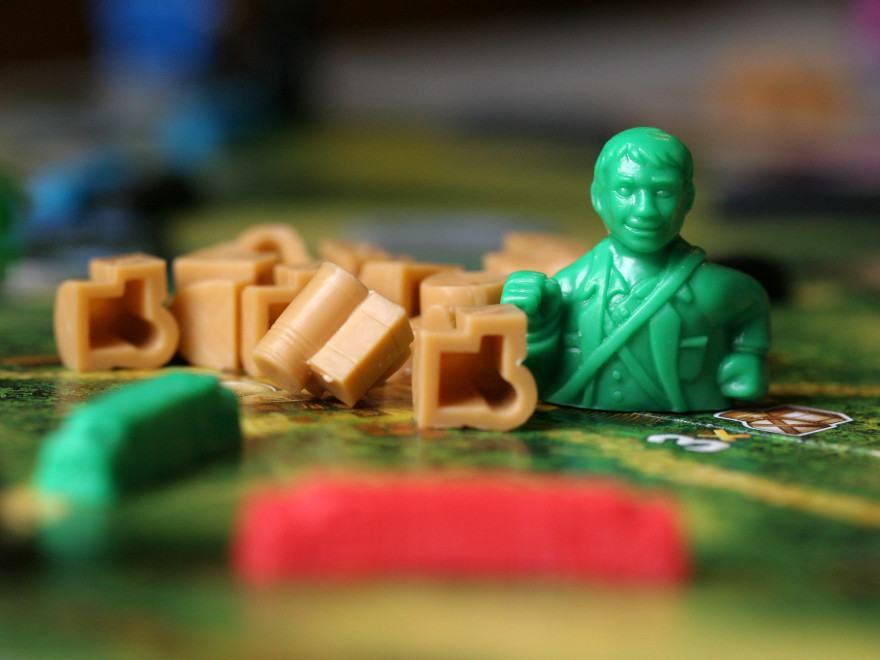 I’m not a huge fan of nature. This may come as a shock from a writer on a videogame website. Hikes, camping, beaches, whatever: none of it appeals to me. As such, a career in archaeology was never in my cards. I am not one for schlepping through vine-choked trails, scrambling over loose rocks, or sleeping on cold wet dirt, no matter what treasures await.

No papers, no committees, just Indiana Jones fending off Nazis.

Days of Wonder has me covered with Relic Runners. Essentially a racing game for 2-6 people, Relic Runners strips away the academic garbage associated with the hunt for ancient artifacts, leaving the pure thrill of racing for treasure. No papers, no committees, just Indiana Jones fending off Nazis while hunting for the ark. The muck of the jungle is abstracted so that the only hint of the natural world, in this game, is the competition for spoils between players.

Relic Runners has separate adjustments depending on the number of archeologists and their familiarity with the rules, but the focus is on exploration. There are four types of temples and ruins total, and each are finite and distinct in the type of rewards they provide. Nature’s only barriers are the initially limited range of movement and the requirement of rations for exploration, as it builds quite a hunger. Otherwise, this game is pure planning, either in an attempt to rack up major victory points through strategic pathway management, or in the systematic obstruction of your fellow runners’ schemes.

As such, in the beginning of a match when everyone is hacking their way through the jungle one stop at a time, the focus is on individual exploration. Paths can be laid alongside each other, so your map doesn’t immediately affect the others, but generally everyone fans out towards their own quadrant and the temples therein. Sure, the green guy may get to a certain ruin before the red gal, but that’s the cutthroat nature of archaeology. The temples are dispersed at random but otherwise, as far as setting up your major relic running routes, if things don’t work out later you can’t blame the weather.

However, as the heat goes on, it’s easy to lose focus on the larger picture. Once actual relics pop into play, the archaeology gets a little more cutthroat. Formerly benign explorers, men and women who you thought to be compatriots in your struggle against the natural world and its attempt to bury priceless artifacts, suddenly swoop in to negate the system you’ve spent rounds formulating. They use a toolbox to rearrange their pathways and suddenly the crystal skull you’ve been myopically focused on disappears on the turn before yours. The race is over. Friendships are obliterated.

All of which goes to prove that man is still a product of nature, no matter how far removed I may feel. In the jungle there are no friends, merely wary neighbors at best and heartless thieves at worst. Civilization breaks down once possible riches appear, and if you aren’t paying particular attention to the board around you, the jewel that you’ve been so focused on can be snatched away as your fingers graze the blue bird’s wings. In this way, while playing Relic Runners, man proves himself to be an animal, heeding the survivalist call for the fittest to emerge.