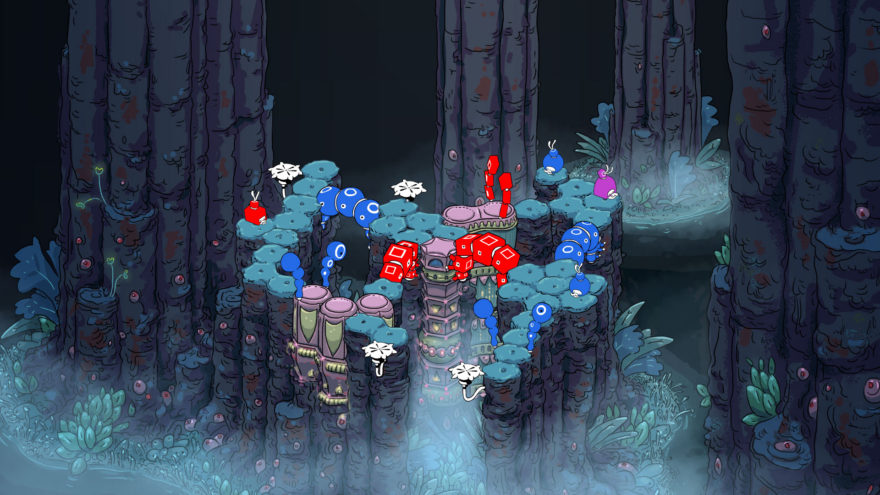 Red and blue make purple. Yellow and red make orange. She Remembered Caterpillars uses the basics of color theory to guide you through its puzzles. Red blobs can only pass over red caterpillar bridges. Blue blobs can only travel over blue bridges. Combine your little blobs, though, and your new purple blob can move over red or blue. It sounds simple—and it is, at the beginning. As the game moves forward, there are more blobs. More caterpillar bridges. More colors. It gets fairly complex, but the objective is always the same: get your blob to the white flower platform so it can bloom and fly away.

She Remembered Caterpillars’s story is not as straightforward as its puzzles, but that’s intentional. Writer Cassandra Khaw took inspiration from the proliferate and cyclical weirdness of fungi—it’s got a certain tenacity for survival in even the meanest of settings. She initially thought of “retelling the Isis and Osiris myth through a fungipunk lens,” Khaw said. And it makes sense: the Egyptian myth is about life, and death, and then life again. Osiris, an Egyptian god and king of Egypt, is killed by his brother, Set, who takes the throne and scatters Osiris’s body throughout Egypt. After Osiris’s death, Osiris’s wife Isis—filled with grief—recovers the pieces of her husband’s body and brings him back to life. They conceive a child, and he moves on to the underworld.

Khaw and the Jumpsuit Entertainment team got pretty far into the story before the plot took a sharp turn. Khaw’s father died. “I guess the plot change was slightly self-indulgent in a way, a kind of catharsis,” Khaw said. “I wanted to talk about grief and about bereavement and losing your parents: deaths are inevitable in everyone’s lives.”

In that way, She Remembered Caterpillars’ colorful little blobs represent relationships that give “the ability to overcome obstacles that would be insurmountable alone,” Goffin said. On the other hand, hanging onto those relationships desperately “can be an obstacle in itself,” and stop you from “reaching a new place,” he added. That’s represented in the game, too, with colorful bug-like archways with particular preference as to who passes through.

The new places in She Remembered Caterpillars are places you’ll likely want to go. Goffin and his team created a lush, weird land reminiscent of Hayao Miyazaki’s Nausicaa of the Valley of the Winds (1984)—the game’s environment is thick with a variety of mushrooms and mold, “a vast canvas of weirdness and vegetal life,” Khaw called it. Goffin also cites the European ligné claire style of art (think French artist Jean Giraud or  Belgain cartoonist Hergé) as an inspiration for She Remembered Caterpillars’ strong colors and unadulterated lines. He’s got an eye for cute characters in realistic, detailed worlds.

“We hope to engage the imagination of the players, [and] give them room for their own conclusions and ideas,” Goffin added.

She Remembered Caterpillars will be available on PC and Mac later in 2016. A short, free demo is playable now on Steam.