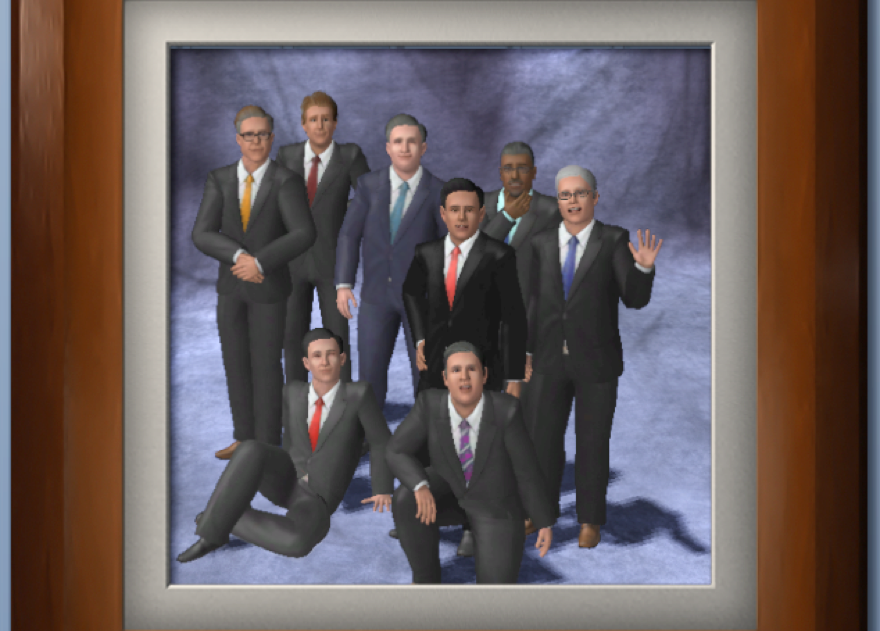 Presidential candidates occupy humankind’s uncanny valley. Sources inform Kill Screen that they have beating hearts and consciences. In order to accede to the presidency, however, candidates must lead not-quite-human lives. The slightest hint of scandal can sidetrack a campaign: a high school op-ed piece; that one time you inhaled at a college party; sex. This creates a strong incentive for aspiring politicos to lead quasi-robotic lives. Consequently, something often seems off about politicians. It’s hard to nail down exactly what is off about them, but they are not like you or me.

Something often seems off about politicians.

Presidential candidates are, in other words, perfect fodder for The Sims, a videogame about real life that, of course, is not actually real life. Over Easter weekend, IJReview’s Dave Jorgenson took this idea to its logical conclusion and recreated the Republican presidential field in The Sims. Drink them in: Jeb, Ben, Chris, Ted, Rand, Rick, Marco, and Scott, their faces a bit slimier than usual, their suits normcore as ever. Since The Sims doesn’t do wrinkles and jowls, the men all look like their younger selves, as if they’d gone straight from the campus conservatives club to the Iowa caucuses.

You don’t have to be Nate Silver to understand that these eight candidates won’t all make it to the White House, but that didn’t stop Jorgenson. He built a White House in The Sims and had the entire field congregate there. Things got weird—weirder than the crazy dinner party in House of Cards. Rick Perry and Chris Christie got into a topless brawl. Scott Walker tumbled headfirst into a swimming pool. Despite being a doctor, Ben Carson stood idly by as Jeb Bush drowned in the pool. The Grim Reaper collected him. Seeing as Jorgenson’s simulated White House was a Republican-only zone, you can draw your own conclusions about the Grim Reaper’s allegiances.

What does any of this have to do with politics? Well, if Ben Carson wins out, Dave Jorgenson will be the only one to have predicted it. Indeed, games and political projections occupy entirely separate worlds. The counterpoint to this phenomenon comes from baseball, where mathematically complex simulators occasionally double as niche games. Probability can be fun. This is one of the reasons election projection sites do good business. Politicians, though they are engaged in an often-absurdist game, do not like thinking of their chosen activity as such. Thus, Dave Jorgenson’s absurdist The Sims creation is the closest we’re likely to get to a political projection game.