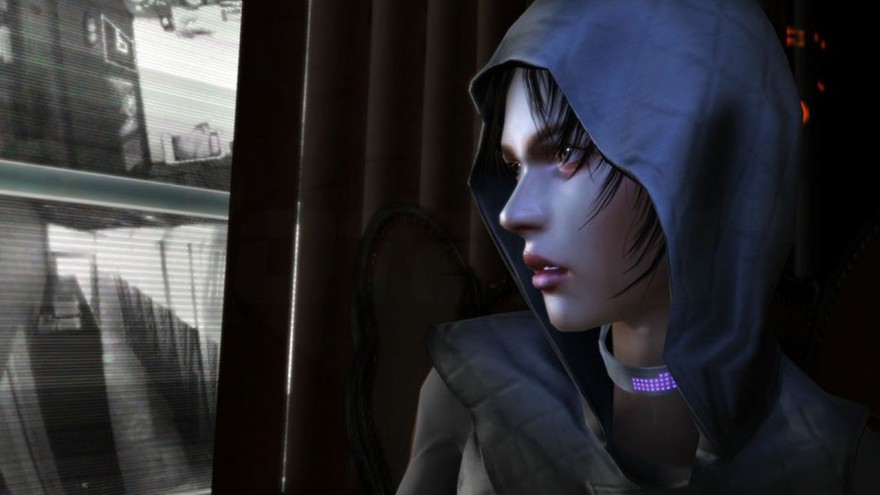 I’ve spent more than a little time attempting to interrogate Republique’s third episode. It is so very unlike the first two episodes and yet also very like them.

Episode 3 picks up almost immediately where Episode 2 left off. Hope, a young female “Pre-Cal” living in the mysterious subterranean “Metamorphosis,” is closer to her escape than ever before. Close enough that she can see the elevator that promises to take her to the surface. As a mysterious third party with the ability to hack into cameras, doors, and other electronics your goal is simple: help her.

This is where Episode 3 heads into new territory.

Ultimately, the stakes and goals are the same. Getting there, however, is what sets this episode apart from the others, for better and for worse. Gone are the earthy charms of the Library or the unsettling opulence of some of the areas accessible only to Metamorphosis’s police force, the Prizrak. Instead, Hope must navigate the cold, steel, clinical areas surrounding “the Terminus,” a large, occasionally glowing metallic object of mysterious purpose. Hope tells us that the ever looming macguffin of “the Arrival” is coming, and that the Terminus is central to it. She also calls the massive machine “almost alive” in what seems like a colossal error on her part or perhaps on mine. And that’s the beauty of Episode 3. It confounds me with slips of the tongue and leaves me wondering if what I’ve seen are the hidden gems of something like an X-Files or Fringe—shows whose truly great episodes are not self-contained but instead have effects that permeate and bleed through.

Eventually, the game moves from the tried and true mixture of telling Hope where to go and shifts towards some mini-games that attempt to foster a connection between the player, Hope, and the Prizrak. This is where Episode 3 heads into new territory, to mixed results. Tasked by the Mattie Sade, the Editor in Chief of the Metamorphosis state newspaper (itself a mixture of TMZ and News Corp), Hope and the player use massive data-collection servers to hack into the homes of several guards, falsely accusing them of crimes. Other Prizrak then come to arrest them, leaving the elevator to the surface unguarded.

This just feels strange. Dystopias and totalitarian societies naturally invite this kind of introspection. It would be easy to only tell stories of vibrant characters who strike out against the regimes that oppress them. But good writing reminds us that the watchmen have stories too. They have families and lives beyond the truncheons that they wield. It’s easy to dislike the essentially anonymous men who throw Hope in containment; it’s hard to humanize them.

It’s here where Republique stumbles. This task ends up taking control of the whole episode. Hope’s tenuous alliance with Mattie Sade pushes her to new and difficult places, but it’s almost too easy for the player to go to them. Framing a guard is just a few taps away. It’s too distilled, too pure. While I keep trying to believe that this is a critique of the ease with which we may smear and libel one another I feel as though the taps on my iPad do not sufficiently implicate me in the game world.

Still, the movements the game makes plot-wise show that Camouflaj are rapidly becoming masters of episodic storytelling. It doesn’t provide answers to questions but, like some great television sci-fi, they expand the mystery from the middle, becoming significant only in retrospect. Consider the example of Fringe’s “White Tulip,” which introduces us to not only sacrificial time travel but also to the white tulip itself. Both seem like one-time occurrences and, by the end of the episode, through the power of time travel, almost nothing has happened. Except that much has. We’ve seen it.

In the end I’m torn over the most “Republique” parts of Republique. One of the strengths has always been that more is going on beneath the surface. It’s actually very possible that this will be the pivotal episode of Republique—not because it was the one where earth-shattering revelations were made, but because it was the one where enough breadcrumbs were laid, deftly and subtly, that those revelations went unnoticed.