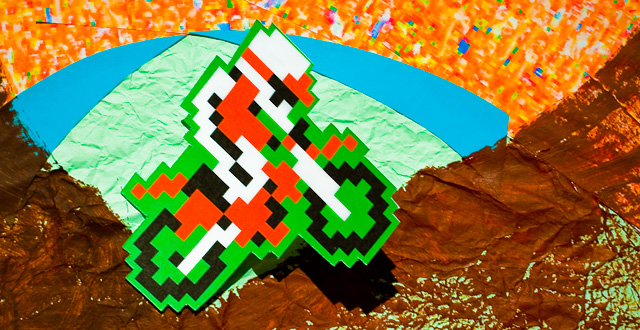 Nintendo is no stranger to repackaging old properties. And we, the insatiable public, are no strangers to buying them up like bottled water at the cusp of catastrophic drought. Now it’s begun releasing a series of updated classics for the 3DS, appropriately titled “3D Classics.” The first, Excitebike, launched with the Nintendo Entertainment System in 1985. Twenty-six years later, one of Shigeru Miyamoto’s earliest designs is again out in front, hoping to set the pace for this latest attempt at selling us old games. But will those two little letters provide an opportunity for more meaningful reinvention?

The question of value has been a constant concern for Satoru Iwata, president of Nintendo Corporate Limited. His keynote speech at the Games Developers Conference this past March hinged on the issue that cell-phone games, many offered for 99 cents, are diminishing the value of all games in the minds of consumers. With its new handheld’s release that same month (and a slate of $39.99 launch titles), Nintendo expected to soothe our parched throats with the vision of 3D gaming, no glasses required. Too many quenched themselves elsewhere.

On August 12, Nintendo reduced the price of the 3DS to $169.99, an unprecedented $80 cut in an aggressive move to counter flagging sales. Iwata blamed himself for the system’s market stagnancy; the day after announcing the price-drop, he revealed he would halve his yearly pay. The Japanese market reacted poorly, and Nintendo’s former president, Hiroshi Yamauchi, fabled leader for 50 years and still the company’s prime stockholder, lost half a billion dollars in stock value. That’s a lot of Aquafina.

What does all this have to do with motocross racing? Not much. But for Nintendo’s handheld division (and much of the film and television industry) to continue to thrive, the gimmick of 3D must be substantiated.  And the prospect of seeing classic games “updated” with 3D graphics provides an opportunity to see the alleged benefit of three dimensions in the starkest terms available: Before and After.

Excitebike is all about momentum. Much like Punch-Out!! is more of a puzzle game than a boxing one, Excitebike resembles motocross racing only by the slimmest of aesthetics. It is instead a math equation in motion. While scooting across four dirt lanes, you seek the exact landing angle and straight-away velocity to keep your little bike going at the fastest rate possible. Those chunky ramps are questions of Pythagorian theory; this massive two-tiered obstacle, a parallelogram. All that terrain is merely your unknown variable to solve.

Even if they are the same, we, the player and the world we inhabit, are inevitably different. And so the game changes with us.

The simple gameplay (A button to go, B button for turbo, Up and Down to change lanes, Left and Right to tilt your bike) provides a meager set of commands, combinations of which provide more depth than is immediately apparent. Roll over the front wheels of another rider and they crash. Tilt forward in mid-air and gain speed. Land perfectly horizontal after a jump and you continue unabated; land askew and your bike hops, losing precious milliseconds.

Of course, Excitebike was doing this in 1985. The new version of the game retains the elegant gameplay but adds a deeper depth-of-field than was previously possible. The original used orthographic projection (basically, showing objects at an angle) to create a sense of dimensional space, the same way many games use isometric perspective to create dynamism within the playfield. With such a strong foundation, the developers could have pulled the sprites out and pushed the background back and called it a 3D day. But something odd and almost magical happens as you bring the device’s 3D slider all the way up. The camera shifts, pulling back slightly, and the entire scene expands, now showing the top of the grandstand until, finally, a sky of layered clouds hangs over the course. In the original, all the player sees is the track, the riders, and the audience.

The effect is subtle but powerful. Seeing the shift in action feels imperceptibly off: think of the scene in Goodfellas with Ray Liotta and Robert De Niro sitting at the diner. The camera zooms in while dollying back; they remain in focus while the world around them moves counter to our eyes’ expectations. In the viewer’s gut, it feels like something is wrong—but you don’t know why. In Excitebike, the sudden revelation of heretofore unknown territory is less about plot prediction and more about inciting surprise and wonder. It speaks to what’s beyond the borders of this or any screen. Perhaps this whole section of the game world has been present since 1985, and is only now being unlocked. This use of 3D—not just embellishing the old, but revealing something altogether new—is a harbinger of intrigue for the remaining games in the 3D Classics series. What unknown peripheries might be discovered?  What other classic worlds have yet to be fully explored?

At its root, Excitebike is the same today as it was in 1985. (The only other difference I saw: the crowd, originally filled with a flat texture of wall-to-wall dots, now has pockets of empty seats—an ominous use of processing power.) But there’s something to be said for experiencing old pleasures in a new context. I read Henry James’ The Turn of the Screw in high school. I thought it was a wordy description of Victorian babysitting. Then I read the text in college, and those same words revealed an examination of psycho-sexual repression. This idea applies to old games, too. Even if they are the same, we, the player and the world we inhabit, are inevitably different. And so the game changes with us.

Twenty-five years ago, a racing game’s purpose was often explicit and singular: Cross the finish line first. Contemporary racers hint at such pure motives. Titles like Need for Speed and Blur suggest these games’ raison d’être is the basic thrill of going faster than others. But such demands are often muddied by the inclusion of police chases and the road-rage dream fulfillment of mounted weaponry. Excitebike reminds us how little we ever really needed. It’s a lean, stripped-down challenge worthy of experiencing again, a return to the model found in ’80s arcades, where repeated attempts yielded a lower time or a higher score, and that classic urge—for perfection—was enough.