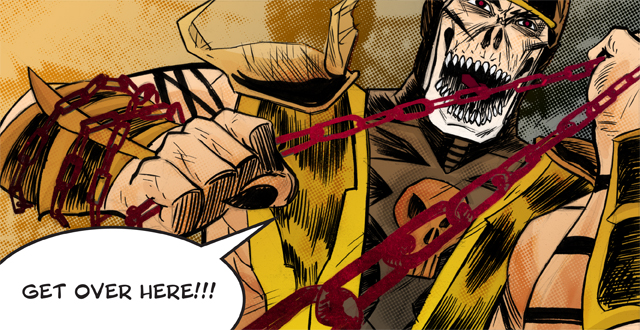 It took me until sophomore year of college to finally see a Bruce Lee movie. My film-major roommate, aghast at my ignorance, dragged me to the video store, where we found a combo pack of VHS tapes—Fists of Fury and The Chinese Connection—for five bucks. We mainlined the double feature that night, cracking up at the awkward English overdubs and marveling at Lee’s martial arts prowess. I still associate calzones and Rolling Rocks with kung-fu flicks.

Years later, standing in line at the prescription counter of my pharmacy, I glanced over at the rack of budget DVDs next to the Metamucil. A familiar cover caught my eye: Fists of Fury and The Chinese Connection. “Two Classics on One Disc!” the box exclaimed in a garish yellow font. The letters appeared to be made out of bamboo shoots.

It’s possible I expected too much from a two-dollar drugstore DVD. But the nostalgic impulse that had prompted the purchase quickly turned sour when I got the disc home. The transfer was barely watchable, its washed-out graininess interrupted by occasional freezes. The audio track alternated between inaudible and ear-shattering, and was punctuated by random bursts of static. The “bonus features” included a one-paragraph biography of Bruce Lee that described him as a “king fu master.”

There are many reasons the Mortal Kombat Arcade Kollection, released in August on Xbox Live Arcade and PlayStation Network, is the two-dollar pharmacy Bruce Lee DVD of videogames. Unfortunately, price isn’t one of them. It’s currently going for 10 bucks.

A peculiar tension is involved in re-releasing any classic. It’s always easier to spot the broken bits in hindsight; the impulse to fix them, to reissue the work “as it should have been,” must be overwhelming. In some cases, that can lead to reworkings so thorough and off-base they obscure the originals. The Star Wars enhanced editions might have contained the special-effects wizardry George Lucas wished he could’ve included in 1977. But lost in the images of Stormtroopers riding CGI dinosaurs was the thrill of watching a filmmaker create a cultural touchstone with puppets, chemistry, and creative storytelling. “Fixing” Star Wars, to a lot of fans, also meant destroying whatever alchemy had created its magic in the first place.

Mortal Kombat Arcade tries the opposite tack. From the very start you get the impression that this thing doesn’t belong here. If these games are classics, what are they doing in such low-rent digs? There’s no high-definition touchup here, no blemishes removed. Each game—Mortal Kombat, Mortal Kombat II, and Ultimate Mortal Kombat 3—is presented in its original 4:3 motion-captured glory. If you like, you can choose between “standard” or “arcade” views; the latter apes the curvature of an arcade cabinet screen, creating an ananachronistic effect on a widescreen HDTV, the same way a VHS tape would. “Filters” add a watercolor effect to the fighters and backgrounds, or emulate an arcade monitor’s graininess. These cosmetic changes comprise the majority of MK Arcade’s “special features.”

From the very start you get the impression that this thing doesn’t belong here. If these games are classics, what are they doing in such low-rent digs?

For a game that displays no fewer than six corporate logos before you hit the main menu that seems awfully thin. Other oddities contribute to the impression of cheapness. For no discernible reason, the Back button, not the Start button, pauses the game. Strange audio bugs manifest occasionally: the Goro’s Lair stage in the original Mortal Kombat plays the intro and outro riff, but music during the round disappears. Some voice samples in MKII are jarringly louder than others: Kitana might shriek in pain at a simple low punch, but her cry of terror as she’s being decapitated is comically muted. By default, the sound-effects track drowns out the music track in all three games, particularly in UMK3. It’s possible these bugs were also present in the arcade versions. It’s hard to tell if their presence in this release reflects a desire to preserve the originals, warts and all.

The Kollection presents its lack of frills as a virtue, a mark of authenticity. But the result is a reissue that is noticeably and bizarrely crappier than the original. While Bruce Lee’s movies can stand on their own without any additional remastering, these games could really have used some retuning. Instead, they’ve been shrink-wrapped and stuck on the impulse-buy shelf at checkout.

The original Mortal Kombat, that bane of Senators and Justices nearly 20 years ago, is still only somewhat playable, more historical curiosity than murder simulator. The animations are still jerky, the moveset and roster of characters still limited. Goro can still kill you in four hits. All three arcade versions, unlike their previous console ports, remain laughably difficult, the AI precision-engineered to siphon quarters. Hardcore fighting fans have long understood that the Mortal Kombat series derives most, if not all, of its appeal from its gore—not from any degree of technical precision. In the fighting-game world, it’s a Home Run Derby, all sensationalism with none of the subtlety. But this re-release emphasizes just how heavily the Mortal Kombat games have relied on shock value—and how thin was the line separating them from failure.

Because, of course, Mortal Kombat’s “gore” feels quaint now. The lightest tap results in a comical spray of pixilated blood. Being impaled on spikes now looks like exactly what it always was—the character model in its “prone” state, superimposed awkwardly in front of metallic rods, like a lousy green-screen special effect in a B-movie. The concept of the “Fatality,” the ritualized murder of a defeated opponent, might remain shocking in theory. But looking back on these finishing moves today, on the primitive art and goofy animations, the net effect is more Monty Python than Texas Chainsaw Massacre. As the series went on, the Fatalities became progressively more absurd—in UMK3, Liu Kang crushes his opponent with a Mortal Kombat arcade cabinet—and playing through this collection, you can chart the series’ journey into self-parody. Like Elvis or the Beatles, it’s hard to imagine in 2011 why the establishment thought something this relatively innocuous was the work of Satan in 1993.

The few online matches I connected to were like jousting while riding a cow. They were only frustrating for a moment, until I realized what I was trying to do. I had to laugh.

Yet there are halfhearted attempts to drag Mortal Kombat into the 21st century. The modern convenience built into every Mortal Kombat game since Deadly Alliance—the moves list on the pause screen—is present here, but inexplicably inaccessible in the seconds prior to or after each round. Online play, which the Kollection bills as a selling point, is so unresponsive it’s essentially unplayable. The few online matches I connected to were like jousting while riding a cow. They were only frustrating for a moment, until I realized what I was trying to do. I had to laugh. It was just like Mortal Kombat to modernize its reissues by cramming in even more absurdities.

Like playing a slot machine, the thrill of advancing up the ladder in Mortal Kombat depends on the fear of losing your money. Half of the fun is seeing how long you can go before running out of coins. That’s lost at home, where the games are played for free.   Not all arcade games can survive the change in habitat.

But there’s also something lost in public performance. Mortal Kombat’s appeal has always relied on its perception as taboo, as a dangerous influence. At 14 I spent most of my allowance at Boardwalk Blvd. in suburban Buffalo’s McKinley Mall, trying to pull off just one Fatality in Mortal Kombat 3. The cabinet was sequestered in the back of the arcade, a safe distance from the family-friendly Whack-a-Moles and Basketball Tosses. Location was important: you were part of something secret and forbidden, huddled at the back wall. Like in a horror movie, the pleasure was in the anticipation of the kill. In public, with money at stake, executing the command to execute your enemy acquired an almost reverent quality. At home, against a faceless online opponent, with a moves list a button-press away, the mystery is gone.

This repackaging of the first three Mortal Kombat arcade releases for home consoles is, then, even stranger a product than the Bruce Lee combo pack. Neither qualifies as much of a collector’s item. But the publishers of Mortal Kombat Arcade Kollection ignore the inherent contradiction in the “arcade authentic” port. Arcades are dead. Long live arcades.