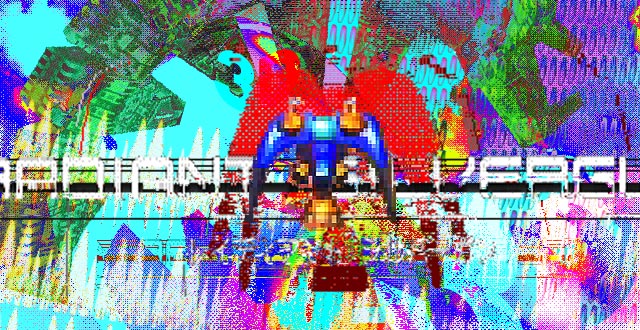 Hunter S. Thompson once said of ’60s counterculture, “Every now and then the energy of a whole generation comes to a head in a long fine flash.” That is how I think about shooters. They were leading up to something. The genre had a natural sense of progression. It was constantly evolving with technology. Making a little spaceship shoot other little spaceships was the ideal showpiece for any new hardware. You could tell exactly how far videogames had come just by playing the latest shooter. Shooters advanced from Spacewar! in 1961, a primitive game played on a panel that looked like it belonged on Star Trek; to Space Invaders in 1978; to DoDonPachi in 1997, a game that showered the screen in so many pink bullets that they resembled cherry blossoms.

The Xbox Live Arcade game Radiant Silvergun was originally released in 1998, a year after the shooter had done it all. At that point, videogames were migrating into 3D. The change in orientation didn’t suit a genre whose name was made on screens that scrolled from left to right, down to up, or just sat still. Shooters that used the third dimension, such as Radiant Silvergun, used it superficially. Corridors jut into the foreground, occasionally swinging in wild directions, but are detached from the core of the game, which takes place on a separate plane. Boxy metal mechas and warships tumble into the line of fire, rendered in basic 3D models. These touches must have wowed at the time, but looking back, they seem like invaders from another world.

The wow factor was extremely important to shooters, with each trailblazing new entry sporting graphical prowess that outdid the pack; but by the time polygons came into the picture, shooters had reached their natural bounds. Upgrades in horsepower could benefit the form little more. Shooters, which were always about moving forward, had finally caught up with themselves. The shooter ethos to “be more awesome” might have climaxed with Radiant Silvergun, a game that, from start to finish, embodies the onward and upward march of the genre. It starts off solidly and becomes progressively more awesome as you play.

One reason Radiant Silvergun evolves from good to astoundingly good is that it takes a while to learn. At first, it is overwhelmingly complex. While most shooters have two buttons—one that shoots, and another that drops an atomic bomb—Radiant Silvergun has a boggling seven different attacks. There is straight-on rapid fire, green sparks that chase enemies down, reports that target several bad guys at a time, a spread shot that fans out behind you, a two-way diagonal shot that explodes in lingering bursts, a pair of lasers that lock on to enemies ahead of you, and, my personal favorite, a sword that chops through ships and bullets alike. Getting your fingers to learn the setup on the Xbox 360 pad is a feat in itself—halfway between controlling a fighter plane and a giant robot.

The stages look like the inside of microprocessors, examined under a microscope; and as you analyze them, the maneuvers become second nature. It is incredibly satisfying to pick apart the line of defense, as if you were removing screws and bolts and wires with a deadly set of tools, shifting between a rapid-fire burst and a sword that feels like it can shatter the screen. But while the fighting system is spectacular, the general ebb and flow of the game is just as impressive. Radiant Silvergun has the rare quality where you continue to play not because you want to win, but because you can’t wait to see what stupefying arrangement of laser beams and robotic fists the game will throw at you next.

More recent shooters like Geometry Wars and Deathsmiles no longer carry the torch. They have become stagnant exercises in onanism.

The game constantly outdoes itself. One moment you are confronted with half-built machines swarming in geometric patterns, similar to bees in Galaga; the next, you are locked into a miniature armageddon with one of the many meticulously crafted bosses. These vaguely humanoid contraptions have such complex attack patterns that they almost seem sentient.

An early encounter puts you toe to toe with a perplexing hunk of metal, wielding talons that spin like a terrifying dental instrument. It sways to and fro, dialing up its shots, which alternate between heat-seeking missiles, clusters of bombs, snakelike blasts that form figure-eights, undulating walls of flame, two orange beams that divvy the screen into segments, one gigantic beam, and crawling green lasers that branch off at 30-degree angles. Meanwhile, you counter with four or five choice weapons of your own.

The game is just getting warmed up. That fight is eventually topped by a showdown with a tank cannon that drives you behind revolving pillars; a shootout with the nesting doll of warplanes; a sparring match against scrap metal that throws punches the size of a planet, and a firefight with a figure that look like a sculpture from Burning Man.

Each is exponentially more awesome than the last. This isn’t because the fights get harder (although they certainly do), or because more bullets are squeezed on the screen (even though they are). The reason is that the shooter genre is evolving before your eyes. The game begins as a standard exercise in gunning down ships and ends with a fight that nearly, but not quite, breaks shooters into 3D. The backgrounds often fold in on themselves, twisting in impossible directions. In the same fashion, the conventions are bent in so many ways that they break off, like the detached parts of an oversized droid that you disassemble bit by bit.

Radiant Silvergun had a sense of purpose that is missing in modern shooters—a sense that it was expanding on the tradition of Xevious and Life Force and R-Type and Blazing Lasers and all the great shooters before it. More recent shooters like Geometry Wars and Deathsmiles no longer carry the torch. They have become stagnant exercises in onanism. While they are challenging and addictive and shiny, and they push the limits on the number of bullets and particles that can fit on a screen, they lack the feeling that they are pressing ahead—that if you just keep shooting, you will get to a part of the game that is so outrageous that you will die once or twice out of sheer amazement. As Thompson said, “You can almost see the high-water mark—that place where the wave finally broke and rolled back.” Maybe that place was Radiant Silvergun.