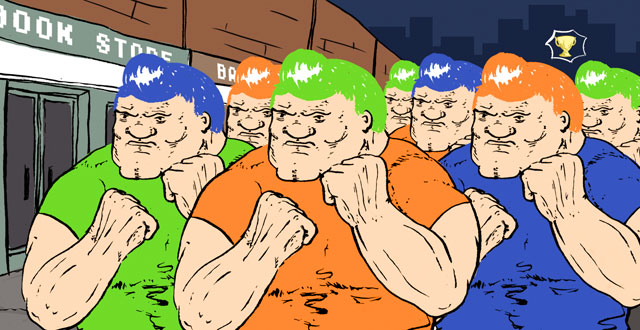 A siren wails. Shuffle backwards. A police car drives past. Whistle and look around, nonchalant. Nothing going on here, officer. No face-punching at all. The car is gone. Walk up to him again. Think how odd, that he’s walking up to you, too. What with all the times he’s been punched in the face. While thinking this, he raises his hands and punches you in the face, hard. Fall down. Tumble over on your back and rise. Your blue hair doesn’t budge. Your green pants are spotless. You will not be deterred. Punch and punch until the other guy, who has the temerity to wear, of all things, orange pants, and to comb his green hair exactly like yours, stands in front of a manhole, the cover suspiciously absent. Raise your hands. Lower your hands. Raise, lower, and punch!!—He falls into the hole. Flex your biceps. A woman throws confetti over you. The falling debris feels like the kisses of a hundred adoring strangers. You could get used to this. You want more of this. The city is nothing but grey high-rises and dark alleyways. Distant windows are lit yellow. Everybody else is home. You have no home. You can only keep moving. So that is what you do.

Walk another block. There he is again. He’s coming at you. Figure you might as well go after him. Think, “But why does he want to punch me?” Think, “This is self-defense.”   All the face- and gut-punching has stirred the neighbors. A man leans out a window above, throws a potted plant at you. Lean back. Narrowly avoid the ceramics. Wonder where he bought the plant. All you’ve seen are Book Stores and Snack Bars and Discount Stores and Barber Shops. Wonder why you can’t kick, or grapple, or eye gouge. Realize the purity of a clenched fist. Realize your fists are never not clenched. You’ve left your guard down. He punches you in the face. Fall backwards. Notice the manhole behind you. Feel panic set in. The mood shifts. The ditty in your head, before all mechanical and buoyant, now sounds urgent. Remember the time you punched him in the face and he fell into the hole. Another one came after. Another thirteen came after. But now you’re the one at the brink. Will you find your way out of the hole? Or is there someone else, just like you, ready to take your place?

You don’t want to find out. He punches high and you block high. He punches high again but you block low. Stumble backwards. A man at the window above holds a pot over his head. There’s no room to move. The pot falls with a cartoon decrescendo. The pot hits you. Stand, wobbling and stunned. The hole awaits. He lowers his hands, reaches his clenched fist back, holding it for a stronger blow. Your eyes are crossed, your arms waving at your side, fists finally undone. He punches you hard in the gut. Fall into the hole. You’re underground, you’re now invisible. You no longer matter. Look up, and through the opening, see the confetti raining down. Raining down on the Urban Champion.