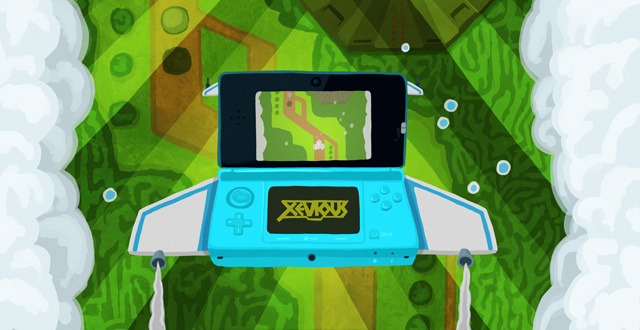 Once you begin Xevious, there are only two ways to end. Your ship Solvalou explodes, or you reach a predetermined high score of 9,999,990. There is no final boss encounter. There are barely levels, with each of the game’s 16 areas cordoned off by a patch of forest. Scenery changes at a metastatic pace, a slow spreading of new enemies and environmental cues until you’re someplace you haven’t been before. Unlike its contemporaries, there are no lava stages, no snow-capped mountain stages, no stages set entirely within a space station. There is only Xevious.

Nintendo and Namco Bandai have remastered the 1982 vertical-scrolling shoot ’em up as a 3D Classic, a downloadable title for the Nintendo 3DS handheld. The original game was developed for the arcades, and it shows. With its unceasing march toward victory or defeat, I can imagine the tension of a freak run, the crowd slowly building behind your shoulders as you dodge floating saucers and maneuver around the spontaneous appearance of black orbs. This sense of communal awe is lost on the handheld, but that’s the story for any arcade port brought home. What is more important to consider, in this new version of a nearly 30-year-old game, is what has been found.

Your ship travels at a pace approaching “plod.” Your weapons are simple bullets or bombs, with no option of upgrades. What makes the gameplay interesting is the playfield—you either shoot craft in the sky, or bomb tanks and structures below on the ground. In the original, this separation of playfields was all imagination. Onscreen, you saw one flat mess of objects. The 3D Classic remake changes this. Now there is a clear separation between the level at which you fly and the ground below you. The effect is simple but stunning.

The basic architecture of Xevious brings a clarity to this depth that might have been marred with the more detailed graphics of modern shoot ’em ups. Here, the mere distance between sky and earth can prove beautiful. It’s a strange feeling: you “see” something that is entirely absent. You are affected, not by the fluidness of movement or audacity of an enemy’s design, but by a perception of space. Since the 3DS’s top screen is wider than the 4:3 monitors of yesteryear, the designers have added a column of clouds on either side of the playing area, a clever frame but also a safe zone in which to avoid oncoming fire. Like those clouds, which are not truly white and pillowy, but instead a mass of water molecules, you see something with the 3D effect turned on—the distance between your spaceship and the prairie lands below—that is not really there.

But to fans of vertical shooters, the approach borders on heresy, as if forcing you down a warp pipe you didn’t know existed.

The graphical effect makes the harsh angles and clean exteriors of the enemies even more harrowing. Most opposing ships in Xevious don’t even look like planes—instead the game throws geometric shards at you, each moving with different patterns and speeds. The most effective is an army of invincible spinning plates. Their appearance is as unnerving as any monolith’s: how did they get here? A machine with the ability to spew bullets was clearly built for a purpose. But this rotating parallelogram? At least Pac-Man’s ghosts had names. It makes sense they would take umbrage with your pellet greed. These nameless spinning sheets are non-sequitur nightmares, fashioned only to confuse and obliterate.

Automatic checkpoints restart you at the beginning of your most recent area. Travel past 70 percent of the area’s distance, however, and your ship will respawn at the start of the next locale. A player continuing the pattern through the entire game could win without seeing nearly one-third of its content. In our era of open-world sandboxes and optional side-quests, this sounds familiar. But to fans of vertical shooters, the approach borders on heresy, as if forcing you down a warp pipe you didn’t know existed.

Another spaceship oddity is the game’s scoring system. If you hit the predetermined high score, the game just ends. Your game time is tracked with each playthrough, but this time is saved only if you reach the maximum score. And so Xevious baffles us—pushing us through unearned territory and yet expecting nothing less than utter perfection. Maybe this is where the name comes from; there is nothing so devious as willfully anticipating the inevitability of failure. But such expectation is also its grace note. These levels might be insurmountable. Yet the sheer existence of them, this game waiting to be played, suggests the only option we have: Try anyway.