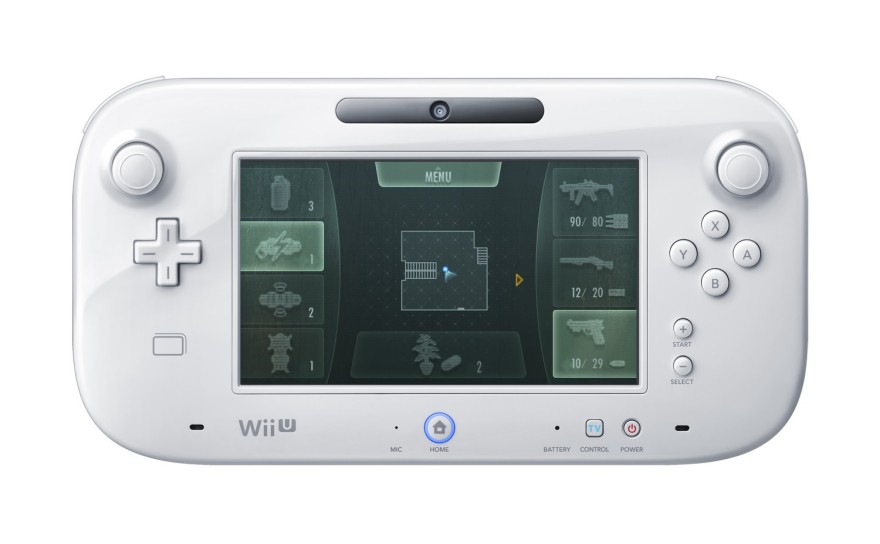 Jill is on a boat. She doesn’t want to be here, but her comrade is missing and he’s suspected of being locked away somewhere on this dinghy. Danger lurks (in zombie form, natch); she’s brought a gun. Soon we will control Jill.

But before we’re given the keys, as has been the custom these past eight or fifteen years, since technology has allowed us to paint pretty enough pictures that we no longer need to use our imagination to fill in the gaps, we see ourselves as Jill walking around, talking to her lumbering sidekick, looking out over the ocean with that plastic death-mask for a face. Then she hears a noise. She swivels and points her gun back in our direction, towards the unknown sound of her friend’s would-be kidnappers. Weapon drawn, we finally take control, our view hovering behind her shoulders.

That gun is important.

Not because it presages the violence afoot, or shows us our proper and expected means of solving this problem. But because in Resident Evil: Revelations, a 3DS game built for Nintendo’s portable system with a glasses-free 3D screen, that gun explodes without ever being shot. When Jill thrusts it out in front of her, the barrel is closer to us than she is. In a way it’s the same parlor trick used since the early 3D boom of the 1950s, where Vincent Price reaches out toward the audience in House of Wax and the audience leans back in their seats. Everything old is new, et cetera. One difference: In 1953, a hand got our attention; in 2012, that hand will most likely be carrying a gun.

The problem is that in 2013, that same gun no longer sticks out. Literally.

The problem is that in 2013, that same gun no longer sticks out. Literally. Revelations came out last month for all major home consoles. As I played on the Wii U and Jill points her barrel out, there is no depth. Something feels off, like some invisible spotlight shines down on this object. The moment is meant to have weight, a significance, but all heft has been stripped by the shift from 3D to good old-fashioned high-definition. The gun is a black-and-white silent film painted in retroactive technicolor: reds are too red, blues are too blue. The game continues like this, dramatic cut-scenes and jump-scares denuded into flatness.

Another old game has been given a new skin, moving between console and portable in a similar fashion; but whereas Revelations reached for the living room, Donkey Kong Country Returns 3D moved from the home to the hands. Each took the same road but traveled in the opposite direction. And in each case, one must ask whether the relocation was worth the tolls paid.

Donkey Kong Country Returns was a 2010 side-scrolling platformer for the Wii. Designed by Retro Studios, the same company who expertly shifted the Metroid series from 2D to a first-person adventure, DKCR was itself a throwback: a run-and-jump collect-a-thon with old-school challenge and lengthy levels filled with secrets.

It all looks nice, I’ll admit.

Last month, Nintendo released the game on 3DS. While Revelations was upscaled and flattened, Returns was shrunk down and stretched out, the fore- and background elements all set apart in pristine three-dimensions. Enemies knock toward the screen, waves rush toward you, cannonballs are shot from ships floating near the horizon. It all looks nice, I’ll admit.

But again the effect smacks of retrofit. The game was designed for the flat, standard definition screen. Now that same game is pulled apart and put back together, a stack of silver dollar pancakes sliced from its larger, plate-filling buttermilk cousin. All the ingredients are there but they taste different, if only because we were not meant to eat it this way.

Compare this to New Super Mario Bros. 2, another side-scrolling platformer built for the 3DS. Here, the backgrounds aren’t artificially separated; raise the system’s depth slider up (which usually controls magnitude of 3D) and the backgrounds subtly blur, giving those asymmetric mountains a soft-focus, as if our attention is firmly on the action up-front. The clever depth-of-field is engineered to to make use of the platform’s abilities. Donkey Kong Country Returns 3D is still a brilliant game, though now burdened with an appendix, not taken out but grafted onto a perfectly-able body, now with visible stitches.

Why do we change what already works? Why this unceasing infatuation with novelty? Maybe because it evolves into form. Film itself was a novelty at first. When viewers ducked into Tally’s Electric Theater in 1902 to watch The Great Train Robbery, they had no expectations of a grand emotional journey; they just wanted the thrill of seeing a larger-than-life train barreling toward them.

Eventually, film became more than spectacle. Games, still, trade on specific traits they do well: challenges to hand-eye coordination, submitting us through increasing fidelity to engage with fantastical realms, the orgiastic punch of pushing a button to make something happen. Why wouldn’t designers try and swap pre-existing games onto separate formats, if only to see what happens?

Before film had sound, actors didn’t speak; cue cards relayed the spoken exchange to the audience. That was how films were made. Why change what worked? Thankfully, Darryl F. Zanuck produced 1927’s The Jazz Singer and Al Jolson’s famous first words, “You ain’t heard nothing yet!” would herald the coming sound revolution. (Alas, even this was a token to the past–Jolson was slyly advertising for his 1919 single, “You Ain’t Heard Nothing Yet.”)

In the same way, Resident Evil: Revelations for Wii U gives voice to those previously mute. A feature of the system is Miiverse, a way for players to type or hand-draw on the GamePad’s 6.2” screen. In this version of Revelations, you can now add a “Creature Message”: that lumbering zombie may sprout a thought bubble over their heads, written by a player you’ve previously fought alongside while online.

You can even create your own. Somewhere, a scared Jill points her gun out of the screen while a walking mass of ooze approaches. The monster, silent for so long, finally can share its innermost thoughts. Above its decaying head: “Knock, knock…”