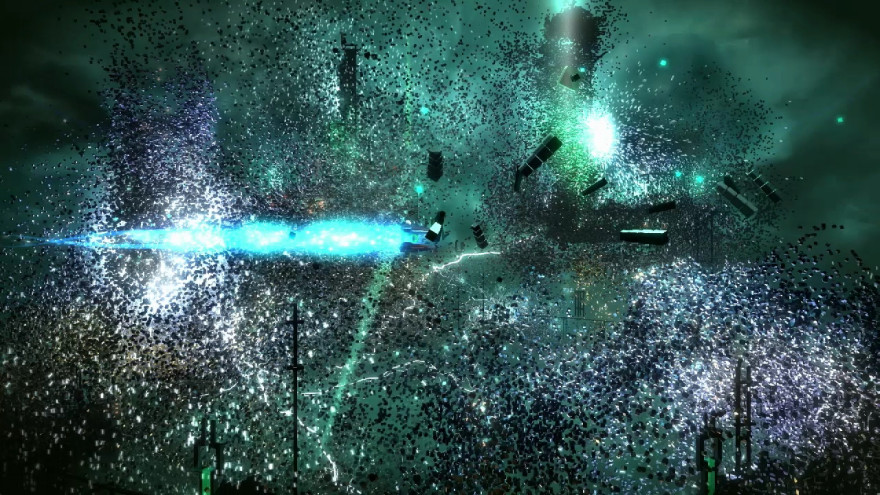 Classic arcade revival games are a genre unto themselves these days. Take a well-worn formula from a game like Asteroids, Robotron, or Galaga, add an intense amount of neon vector explosions and maybe a shiny new mechanic and you’ve got the perfect partner for a console debut. This revisioning isn’t too dissimilar from the turn-of-the-millennium TV game show revival here in the US. These game shows took simple trivia contests and turned them into decadent spectacles. The 00s-era game show comparison ends up being sort of absolute in the case of Resogun. Though it builds off Williams’ 1980 space shooter Defender, Resogun ends up having just as much in common with Who Wants to be a Millionaire?

Resogun is a straight-faced, side-scrolling space shooter. You move left or right around a cylindrical loop, blasting every vaguely insectoid thing that crosses your path. Occasionally a special glowing set of enemies will appear, and upon the defeat of the entire lot, they will release an imprisoned human for you to rescue. These humans can be retrieved and returned to safety, netting you weapon upgrades and bonus points. True to arcade tradition, Resogun is a high score game, presenting 5 similar-looking levels that are meant to be played repeatedly in pursuit of maximum points. For those unfamiliar with Defender, I pretty much just described it, too.

When someone beats a level in Resogun, the entire stage explodes into plumes of cascading metallic voxels.

On a systems level, Resogun and a game show like Who Wants to be a Millionaire? are almost nothing alike, but when it comes to aesthetics, the two are kissing cousins. Both are obsessed with blue lights, set on circular/cylindrical planes, and pipe in tense music to put players and viewers on edge. When someone on Millionaire wins the grand prize, showers of glittering confetti rain down from the ceiling. When someone beats a level in Resogun, the entire stage explodes into plumes of cascading metallic voxels. The Millionaire set looks as if it was designed as the core of some kind of Star Wars warp drive, while Resogun turns the engine on and cranks it to full speed.

Dazzle is a key factor of both Resogun and Millionaire. The game or the show, if removed of these hyper-stimulant elements, might appear rudimentary. The result is that the aesthetics can feel like a bit of magician’s misdirection. At its core, Who Wants to be a Millionaire? is just a trivia ladder climb with some minor gambling elements and a few “assists” thrown in for good measure. It’s not all that different from the trivia games regularly played in bars and bingo halls with a lot less fanfare. Millionaire derives its gravitas from the incredible stakes of its monetary rewards, which are reinforced by the show’s dramatic future aesthetic.

Likewise, Resogun plays like an old arcade game with fancy set dressing. While this makes the game feel familiar, it also seems to be reaching for ways to justify itself on the new $400 PS4 used run it. Like fellow launch title Knack, Resogun wants to prove how many tiny, individually modeled objects the console can render at once without stuttering. While these effects do catch the eye and run beautifully, they are still largely just façade and a reminder that you don’t actually need a supercomputer to play a side-scrolling shooter.

All that visual razzle dazzle turns into a sort of optical obstacle, hinting at what a modern bullet hell game might feel like.

Ultimately, the comparison to Millionaire makes Resogun feel a bit dated, not in the sense that it culls heavily from an old game like Defender, but that its ideas about remixing and revamping feel very Y2K. This is especially true when you put Resogun up against a game like Pac-Man Championship Edition DX, which has taken the old-school arcade conceits of Pac-Man and fundamentally changed the way it’s played, adapting that formula for a non-coin-op environment in the process without losing that “arcade” feel. Resogun simply applies the Millionaire treatment to Defender, putting a pretty coat of paint on a known quantity.

Resogun does introduce some new things: all that visual razzle dazzle turns into a sort of optical obstacle in places, hinting at what a modern bullet hell game might feel like. But the game’s warm reception is ultimately just a testament to how much fun those old arcade games are, even in 2013. That, I am obligated to say at this juncture, is my final answer.