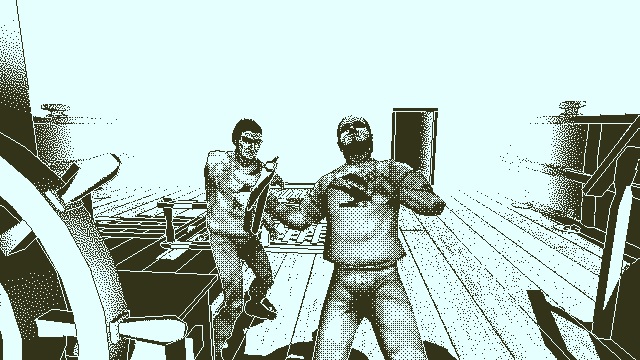 One could almost consider exploring history a form of puzzle solving. Extrapolating facts and events through ruins and artifacts and documents, putting together a cohesive story through the remnants of times. Lucas Pope’s upcoming Return of the Obra Dinn, his narrative-driven follow-up to Paper’s Please (2013), is a game that encompasses that process. A mystery of a lost ship pieced together by discovered documents and flashbacks triggered by the remains on board.

In Pope’s latest updates in his TIGSource devlog, those documents and artifacts are slowly taking shape. Recent GIFs show the lengthy manifest, revealing the crew names, their roles, and place of birth. This crew record is complemented by a sketchbook drawn by the ship’s artist, offering snapshots of life on the ship before its mysterious fate. As you uncover more about the crew, you’ll be able to link names with the faces in the sketches.

The Obra Dinn is a character in this mystery as well, and other documents imbue the ship with its own history. A deck map not only lets the player keep track of flashbacks and discoveries, but also gives the ship a sense of presence, while the sea chart traces the Obra Dinn’s journey across the Atlantic.

a narrative jigsaw where the pieces are the dead

Through these various artifacts from the lost ship, the mystery of eerie fate can be pieced together, a narrative jigsaw where the pieces are the dead, the documents, the decrepit husk of the titular ship.

Return of the Obra Dinn is still in heavy development, and has no release date at the moment. For more details on the game and to follow Pope’s progress, you can read through his devlog here.