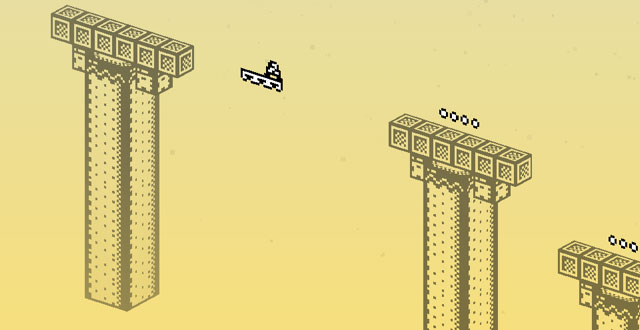 1-bit Ninja’s appeal is hard to deny. A minimalist retro throwback saddled with fourth-wall bending gadgetry, the game is a handheld love story in which Game Boy meets geek chic. Its tricky, lo-tech platforming stages, dotted with abstract bad guys and even capped off by flagpoles, could be an alternate history to Super Mario Land, the black sheep of the Mario line. Yet the meta-technique of tilting the world to find secret passages in 3D is new-school in the way that hopping down a warp pipe was in 1985. Unfortunately, odd design and an obsessive-compulsive irrationality put 1-bit Ninja in a category with the likes of New Coke and early flying machines: a good idea that’s poorly implemented.

The style and substance of 1-bit Ninja ape that of Super Mario Land, the heroic plumber’s clunky and atypical small-screen outing, which launched with the Game Boy in 1989 and was re-released for the 3DS in early June. Such direct imitation invites the question: Why is this modern jumper outshined by the obsolete classic to which it mockingly pays tribute? Does 1-bit’s vanilla personality hold it back? Perhaps the omission of mid-level checkpoints is to blame. Or is it the simple fact that Mario moves left and right, while 1-bit’s nameless hero is stuck going in one direction, as if you were playing on a Game Boy with a busted d-pad?

Such direct imitation invites the question: Why is this modern jumper outshined by the obsolete classic to which it mockingly pays tribute?

The easy answer is pedigree. Gunpei Yokoi, Nintendo’s ex-mad scientist, game designer, and financial strategist, who also invented the Game Boy and a whole slew of other tech-toys, oversaw production of Mario Land. Not only is he connected to the game’s tangible qualities—its almost but not-quite familiar brand of running and jumping—but also to its Dasein, the architecture that shapes the game in ways so fundamental that you ordinarily wouldn’t think of them. Consequently, Yokoi’s DNA runs throughout 1-bit Ninja, from the overly cautious platforming down to its grayscale palette. The style thrives on pure nostalgic value.

While 1-bit Ninja succeeds at reproducing the look and, to an extent, the feel of its inspiration, it nevertheless fails to capture what makes even a bad Mario game fun: a quick pace and a sense of surprise. Whereas Mario games are filled with moments of accidental discovery, in which hitting a normal-looking block can lead to a wealth of coins in the sky, 1-bit Ninja feels dyslexic in this regard. A prize is dangled before you, but when you look into getting it, you’ll discover you’ve already missed your chance, falling to perpetual disappointment.

Pacing lags. Landing perfectly timed jumps and well-placed head bops turns out to be a rather plodding experience. The difficulty hails from the hard-for-hard’s-sake school of thought, popularized by indie platformers like Super Meat Boy, VVVVVV, and N. 1-bit isn’t as challenging as those games, and its misstep isn’t that the difficulty is too high, per se, but rather that its dry run-and-jump formula doesn’t warrant playing a level 25 times. It evokes a dull feedback loop—blunted by its mildly addictive manner—that slowly swells to an outburst of frustration when I throw my hands up and quit.