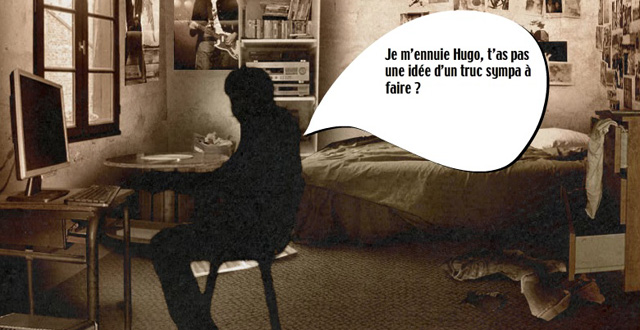 The year is 2025. You’re a detective, apparently. You specialize in data alteration, or something. Inexplicably, this phishing site called dénicheur.net has drudged up the embarrassing personal information of four old acquaintances, threatening an important event in each of their lives. Fred, Anaïs, Morgane, and Tom now need you to help them save their reputations by going back in time and saving their younger selves from the pitfalls of the Internet. How is this possible? That’s on a need-to-know basis.

Tralalere’s 2025 Ex Machina is designed as a “serious game.” Its mandate is to teach kids aged 12 to 17 about Internet privacy and security by promoting critical thinking skills and time management, and by discouraging the sharing of private information. Ironically, 2025 Ex Machina actually falters in its goal by withholding information from the player.

The game is entirely in French, but its portrayal of telecommunication resources is something almost everyone can understand. Each of the four stories is centered on a specific form of Internet media: a message board, mobile Internet, online gaming, and blogging. The game asks the player to travel 15 years into the past to prevent the irresponsible use of each medium. 2025 Ex Machina relies on an interesting mix of branching dialogue options, logic puzzles, The Sims-styled management strategy, and simulated reality in the style of UFO on Tape to help contextualize its message.

But the game all-too-frequently resembles a bad PSA: too perplexing and illogical on the one hand, too simplistic and condescending on the other. Often, the game’s philosophy is undermined by design choices that—while fostering gameplay—don’t make any real sense. In the story “Hugo & Tom à Zoumbi’city” (“Hugo & Tom in Zombie City”), I had to both maintain a good reputation in a zombie-themed MMO and balance a Sims-esque weeklong schedule of Tom’s activities. I thought I was just a time-traveling hacker detective—now I’m a god capable of deciding when the kid eats and goes to the pool?

2025 Ex Machina uses a simple, first-person cursor avatar—referring to the player by a chosen username—as a way to identify the player with the subject matter. But the obvious inconsistencies in the game’s logic corrupted the relationship I had with my role. I was distracted by the absurdity of the scenarios. That a phishing site has decided to embarrass four people who all happen to know each other seems more than a little convenient. I also wrote a list of ways 2025 Ex Machina abuses the space-time continuum—it’s a long one. These inconsistencies and plot holes not only break the suspension of disbelief, they insult the player’s intelligence. That’s considering the target age.

Tralalere designed 2025 Ex Machina in association with the European Union and a government organization called the Delegation of Internet Usage as part of an overall awareness campaign. To its credit, the project encourages open discussion and aims to educate and inform its users. But the game is oppressed by poor execution. And I couldn’t help but snicker a little when its website required me to enter my personal information to create a save profile.

I hope no future phishing site finds evidence I played this game. That would be embarrassing.