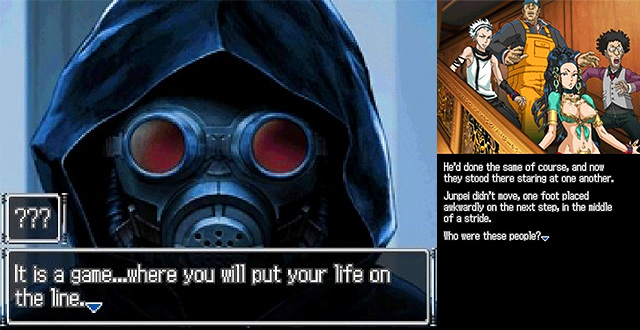 One of the best compliments I can give 999: Nine Hours, Nine Persons, Nine Doors is that it has nice-sounding text. (After all, it is a sound novel, marking the fiction-focused genre’s maiden voyage to the West.) The dialogue spoken by the game’s nine personalities isn’t voiced, but conveyed in a pleasant string of beeps. These tones vary according to each character’s personality. So, the ponytailed schoolgirl squeaks in an energetic beep, and the somewhat suspicious and grizzled pharmaceutical exec speaks in a low, melodic tone.

This detail is almost completely irrelevant to the game. I imagine the majority of people don’t play 999 with headphones, and never hear a difference. Yet the development team clearly gave it a good deal of attention. These carefully orchestrated sounds are a prime example of a tangent. It’s the team’s tangent, for wandering off in such an intricate yet ineffectual direction. And it’s my tangent, for writing about it. But that’s the kind of game 999 is. It’s endeared—and endured—for its tangents.

999 is at its best when on a tangent. The writing is awkward. The characters are stock. The puzzles are clichéd. What few choices it gives the player don’t offer much agency. Its narrative is juvenile, misogynic, and, for the most part, a bore—equally content to linger on a chunk of human flesh as on a keycard reader, hallway, or door. The plot, which involves nine people who are forced to play a deadly game inside the hull of an old ship, feels borrowed from Saw and, if it were heavily censored, Pier Paolo Pasolini’s Salò.

It’s when a group of characters strike up a conversation about Kurt Vonnegut’s hypothetical ice-nine (a form of ice that melts at 114 degrees Fahrenheit instead of 32)—instead of trying to escape from the meat locker they are trapped in—that things get interesting.

The story is supplemented by these curious, and often fascinating, asides. Topics range from the philosophical, such as the Ship of Theseus paradox; to the fringe, touching on automatic writing and the value of cryogenics to space exploration. These threads aren’t quite loose ends—they all tie into the plot somehow—but only tangential, relayed through flashbacks, cut scenes, and anecdotes. And while 999 misses its chance to get the player directly involved with this fascinating miscellany, at least it’s entertaining to read.

Crushingly, these truffles are buried beneath the game’s dialogue tree, so that the player must dig through an archaic structure of roots to find them. 999 unfolds like a choose-your-own-adventure book that has to be reread from the start each time. Some forks lead to new places and strange, new conversations. But others, like most tangents, lead nowhere, except maybe a To Be Continued screen. Despite the prospect of unearthing another intriguing conspiracy theory about the Titanic, it’s frustrating to move through the game in this manner, solving the same puzzles and fast-forwarding through text to reach a divergent path on a replay. It’s a grind. It feels like work.

And it reminds me of an article I read by David Owen on the Jevons Paradox, a theory suggesting that more efficient energy use leads to higher energy use. In it, he claims a caveman had to work 58 hours to afford a single cave fire.