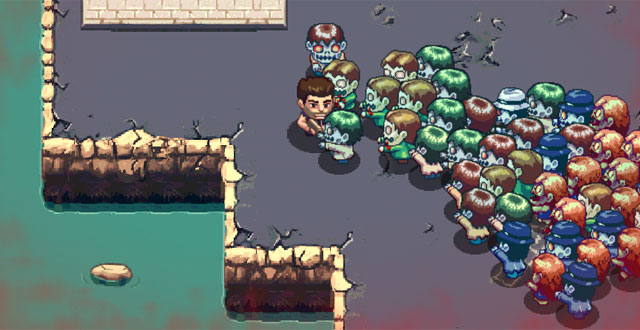 We are past the point of zombie saturation. I’m even sick of articles about the glut of zombies in the media today. They are everywhere. I am playing two zombie games right now, and at the point of diminished returns.

Zombies, as a literary device, can be used well. They are the mindless consumers in Dawn of the Dead. They (quite literally) attack celebrity culture in Dead Set. They expose the fault lines underneath modern society in World War Z. Even in videogames, they can carry some meaning—in Left 4 Dead, their overwhelming numbers force players to rely on their teammates.

More often than not, though, we see zombies in videogames because they are easy enemies to implement and understand. All the zombie has to do is shuffle toward you with purpose. Age of Zombies sticks to this template, using zombies as slow-moving targets. With an overhead view of the action, you steer Barry Steakfries around historically themed levels and blast through zombies using a variety of weapons. There are shotguns on shoguns, pistols among pyramids, and rifles against robots. High scores and light gore.

Age of Zombies gets the base elements correct. The zombies shuffle, grunting and groaning in 16-bit splendor. The controls are simple, ensuring that the game is intuitive and easy to play. Superficially, the running and gunning is solid. But Age of Zombies stumbles on another fundamental.

The scoring system is inelegant. It is not rich, like the risk/reward fire mechanic of Burn Zombie Burn. Nor does it have the intuitive “kill, kill, kill to keep the multiplier up!” go-getter pace of Boxhead: The Zombie Wars. It’s far from fresh, like the location-based score multiplier in Zombie Movie. Instead, Age of Zombies has a multiplier and a counter. Mowing down zombies with a certain weapon increases the counter. After that weapon runs out, the counter stops. Your overall score multiplier increases according to that counter. All these numbers spit out a score.

This method of scoring doesn’t affect the way I play the game. It translates into picking up weapon drops and killing waves of zombies—which is exactly what I would be doing anyway. In other zombie games, elaborate scoring systems shake up the gameplay, and hide the fact that I am shooting monotonously at slow-moving targets. That can be a pleasure, but a short-lived one, and one offered by too many other zombie shooters.

What does that leave us with? The story? The evil Dr. Brain releases zombies into a time portal, dispersing them into various points of history. Age of Zombies goes for a light tone, and sometimes it succeeds in being funny. I was disappointed when I came across a line that lazily referenced The Simpsons. I was disappointed, not that the writers felt the need to steal a joke, but that they hadn’t thought to steal a better game’s design.