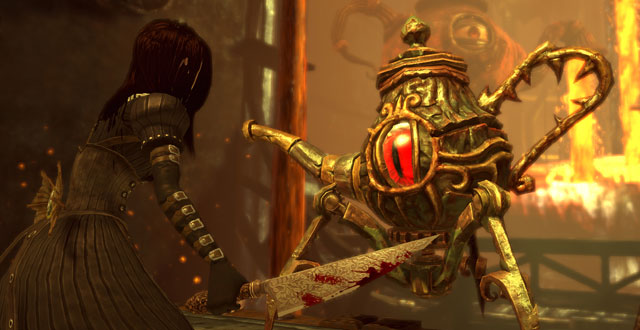 Alice laughed. “There’s no use trying,” she said: “one can’t believe impossible things.” “I daresay you haven’t had much practice,” said the Queen. “When I was your age, I always did it for half-an-hour a day. Why, sometimes I’ve believed as many as six impossible things before breakfast.” — Through the Looking-Glass and What Alice Found There

A developer’s true métier is in artful journeying. Gamers crave getting lost in worlds that don’t remind them of the lingering annoyances of life, and this is doubly true for videogame adaptations of prior works. While a film or TV adaptation usually hits certain story beats to please fans of the source material—imagine the fan outcry that would occur if the creators of Harry Potter or Game of Thrones added completely new characters or subtracted settings—a successful videogame adaptation often hinges on how far the developers deviate from the through line of the source material. Players make the imaginative leap once they take the controller in their hands. It’s a participatory art form that thrives on developers getting their hands dirty.

Set roughly 10 years after the first game, Alice: Madness Returns is a risky adaptation. Spicy Horse and American McGee’s second mutation of Lewis Carroll’s world has a twisted logic that works for the same reason humans love to watch a garish horror film: it titillates through implication more than explication. Shadowy figures lurk behind mummified castle walls, and horrifically mutated forms of Carroll’s characters moan in the distance.

There should be a constructive discord between what fans expect of an adaptation and what is encountered. Spicy Horse understands this tacit directive—its milieu is filled with grotesque tinkerings of John Tenniel‘s original wood engravings. Tenniel’s art always had an air of strangeness, but McGee and Ken Wong append postmodern angst to their character models and environments. Headless baby dolls, Looking Glass’ fuming Infernal Train depicted as a cathedral-like atrocity, and a steampunk Hatter’s Domain build off Carroll’s interest in a shattering of innocence. Tim Burton’s world has nothing on McGee’s explicit creations.

All of these elements aim to kindle imagination and permeate an unsettling aura of dread—in contrast to the original books, which sought to inspire astonishment. London and Wonderland visualize Alice’s bifurcated psyche. The former is a gray, sooty, and distinctly Victorian reality check. The latter is a nightmare/dreamscape that mirrors the heroine instead of serving as her converse. One of its most adult-oriented extrapolations is the Mysterious East, which Alice explores after she is shrunk down to the size of an insect. It’s “Oriental” in the Victorian sense of the term. Japanese, Chinese, and other surrounding cultural touchstones are smelted into an intoxicating mélange of origami, lethal wasps, and the Caterpillar with an old-fashioned Chinese pipe and Beijing opera makeup on his wings. This and other levels show Alice as a threatening anti-hero that tells more about the adapters than the source material.

In motion, however, Alice feels akin to loving the vivid metaphors used by an author, but abhorring their grammar. You don’t steer Alice’s wandering as much as you manage and wrestle with it. The camera system tugs in awkward directions, and gets worse when you enter battle. Platforming sections make you grit your teeth. Alice’s Vorpal Blade, Pepper Grinder, Hobby Horse, and Teapot Cannon are extremely imaginative tools of destruction, but even a pumped-up Hysteria Alice can’t slaughter her distorted enemies while jumping. All of these negatives draw you out of this otherwise capable adaptation.

The reality of the game world—much of which takes a cue from Polish painter, photographer, and sculpter Zdzis?aw Beksi?ski‘s surreal and disturbing images—sort of falls apart on close inspection. It’s disconcerting to see graphical tearing occur as you behold Queensland’s petrified castle remains, covered in dead tentacles and organs. Even characters without straitjackets twitch in unexpected and illusion-shattering ways. Such graphical hiccups catapult us back to our well-worn spot on the couch. This curiouser and curiouser world isn’t quite as immersive when you can see the strings pulling Wonderland’s marionettes across the screen, or Card Guards holding up a spooky, pastel dollhouse ripped straight out of Hi-Fructose Magazine.

McGee and Spicy Horse have skillfully expanded their source material. The violent tone of Madness Returns wonderfully adds another layer to Carroll’s world, but its technical limitations weigh down players who want to lose themselves. Any Wonderland, adapted or otherwise, disappears once clunky procedures butcher our sense of awe.

Now, here, you see, it takes all the running you can do, to keep in the same place. If you want to get somewhere else, you must run at least twice as fast as that! — Through the Looking-Glass and What Alice Found There