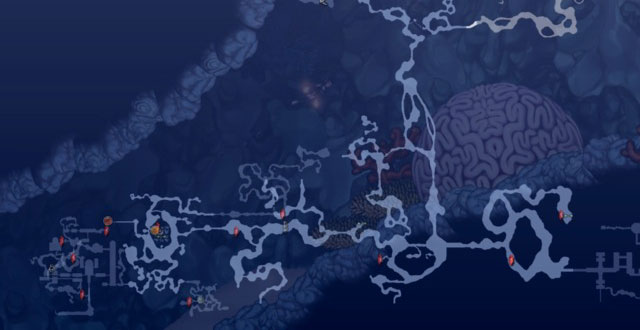 Aquaria might as well be called Uncharted. It is probably what cartographers do in their downtime. The game begins deep in an ocean that holds every type of marine life one can imagine, and several sunken kingdoms. Your green-skinned avatar doesn’t start with much. She has an empty undersea dwelling, the ability to sing, and a map—one that grows and sprawls and even confounds as you explore the sea.

Admittedly, my own personal interest in Aquaria arose from a fondness for charting virtual spaces. Give me a map to fill out and a game world to explore, and I’ll 100-percent it most every time. Here, my compulsion met its match. Exploring every nook and cranny of a single cove is easily doable, but as each space splits into two or more new areas, the map unfolds into a massive structure of cavities and narrow underwater tunnels. The game is strung together by lengths of intestine-like tract. Rather than filling out a grid, you have the feeling that you are passing unwittingly through the viscera of some primordial dragon from tribal folklore, whose body was hacked into pieces and plunged into the ocean to form islands and undersea mountains and caverns at the beginning of time. You aren’t, but the sea is enormous and initially mystifying, and, at first, it feels like you are.

Aquaria’s actual story is heavy-handed and hard to take seriously, involving an amnesiac mermaid on a fatalistic quest for identity. It is told through sparse, intermittent cut scenes; but for the most part, the game speaks for itself. You are here. You need to go there. Between here and there are hundreds of gulfs and cankerous twists and turns in the ocean. The game is less about shooting bad guys than it is about vastness—swimming a great length until you start to feel very small. As each passage fades into the next into the next, the pretense of nautical conquest becomes all but debased. The irrational impulse to fill in every square inch, to do everything perfectly, gives way to a mildly existential moment, when it hits you that charting the depths, and getting caught up in the details, play second fiddle to the overwhelming sense of scale.

As each passage fades into the next into the next, the pretense of nautical conquest becomes all but debased.

That is not to say Aquaria lacks traditional game components. Gaining a new ability opens a new path. Crabs and electric eels drop items that can be cooked into power-ups like sushi and seafood stew. And bosses such as a tumorous octopus and a marble statue straddling a pair of tentacles move in memorizable patterns. Yet even a Godzilla-sized sea urchin is dwarfed by the sheer magnitude of your surroundings. The draw is in losing yourself in the bigness, and diving for so long that you forget where you are going, and being caught off-guard once you get there. The strange shape of the unknown inspires fleeting moments of awe as you push forward—if only to see how deep the ocean goes.

At the same time, Aquaria may be too big. The problem is that being struck by its size inevitably leads to another realization: You have to travel across the abyss. Getting anywhere can be a rather vacant task. You’ve probably seen the Metroid-like design before. The difference here is that the hooks are less defined. Super Metroid kept you honed in as you scanned every pixel of its terrain for secrets. Castlevania: Symphony of the Night had a leveling system that made you fiend for raw numbers. Aquaria’s meandering ocean is too ponderous a place to keep you tuned in moment for moment.

This is okay; even commendable. It’s nice when a game allows your mind to stray instead of funneling it through a bottleneck around each corner. It frees you from the minutiae, so you can contemplate the expansive, bold design underneath. But, after a while, there is simply not much left to consider. That is the drawback to speaking through design, as so many game designers are fond of doing. Design is functional, not poetic. Rather than lingering on the meaning of form, I started thinking about how I need to buy cat food, or if the mole on my stomach is growing. Instead of opening up a space for your thoughts to run wild in, Aquaria just opens. In the end, it will likely be left uncharted.